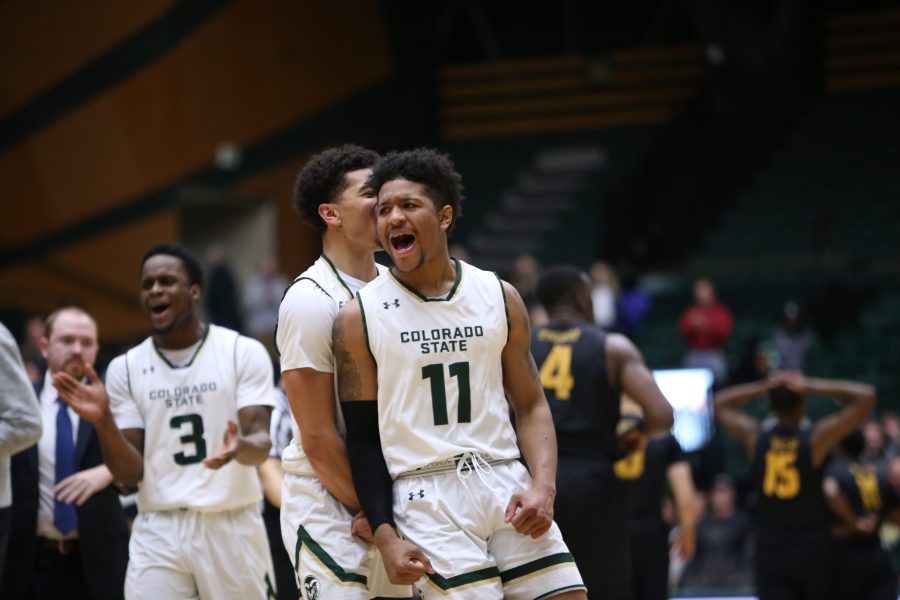 Colorado State junior guard Prentiss Nixon saved the Rams and came through in the clutch once again Saturday afternoon.

It wasn’t easy, but the Colorado State Rams knocked off Long Beach State 68-66 in front of 2,752 ecstatic fans at Moby Arena.

Nixon converted a deep, falling 3-pointer with the game clock expiring to give CSU a victory.

The Rams were trailing by one before Nixon sent Moby Arena into madness. Long Beach State took a 66-65 lead when Deishuan Booker made a layup with only 4.6 seconds remaining.

But, with the game on the line, Nixon took matters into his own hands. The junior guard rushed up the floor and tossed up a desperation heave from about 30 feet away from the 3-point line before falling to the ground.

“I’m confident in all of my shots,” Nixon said. “Just me being who I am. And I practice that shot everyday. You know I did it pregame today, so I just hit it like it was a regular shot. But it happened to be a game-winner.”

The win was also a little sweeter than usual for CSU given it has lost to LBSU in each of the last two seasons.

“It feels great, a lot of the younger guys don’t understand,” Nixon said. “My freshman year we lost, they came in here and put on a show. Last year they were dunking the ball all over our heads. It feels really good to beat this team, they’re a good team.”

Though head coach Larry Eustachy had the option of calling a timeout to let his team regroup after Booker’s late, go-ahead layup, he chose otherwise.

“I just think it (calling a timeout) gives the team a chance to set their defense up,” Eustachy said. “Ever since I met Jerry Sloan, coach of the Utah Jazz, I’ve developed that. I just think players make plays and we got it in the hands of the right guy.”

In addition to the advantages of not calling a timeout, Nixon has proven that he is accustomed to and can be relied on in the closing seconds. Last season, Nixon knocked down a game-winning three against Wyoming with only six seconds remaining.

“A lot of guys just chuck it at half court when they really can go even farther,” Eustachy said. “He (Prentiss Nixon) has great timing to get within his range and make a shot.”

CSU shot 38.7 percent from the field as a team and a lowly 20 percent (5-25) from 3-point land. While the Rams were cold offensively for the majority of the game, CSU clicked in the opening and closing minutes of the game.

The Rams hit the ground running and converted seven of their first 13 field goal attempts in the game. This helped CSU build a 20-7 lead early in the first half.

After sinking their first shot of the game, the 49ers then went seven minutes before hitting another shot. Long Beach State missed 11 of its first 13 shots from the floor.

After the stellar start from the Rams and ice-cold beginning for the 49ers, the teams began to move in opposite directions.

The 49ers came out with authority in the second half and all of a sudden, the Rams trailed after leading for essentially the whole first half.

With 13:57 remaining in the contest, Eustachy received a technical foul after aggressively arguing a questionable call. Edon Maxhuni hit both of his technical free throws, stretching Long Beach State’s lead to six.

The technical wasn’t ideal for CSU when the game was slipping from its grasp. However, Eustachy believe that the foul may have gave his team the spark it needed.

The Rams went on to make five of their next seven shots to cut Long Beach State’s lead to one with less than 10 minutes left. CSU also finished the game by converting its final four attempts from the floor.

Despite not shooting their best, the Rams distributed the ball efficiently against the 49ers. CSU had 16 assists on 24 total field goals, nine of which came in the first half.

James and Nixon led the way offensively for CSU, as each scored 14 points. James also collected seven rebounds in the victory.

“We’ve been able to practice and that’s made a difference,” Eustachy said. “You see it in Deion (James) and the whole team.”

Paige chipped in with 11, three of which came on a key go-ahead 3-pointer with 2:22 left in the game.

Up next, Colorado State will travel to Boise State to face the Broncos on Wednesday night, kicking off the Rams’ conference slate.

“This team scratched and clawed until the end,” Nixon said. “It’s very important for our confidence, especially going up to play Boise on the road on Wednesday.”