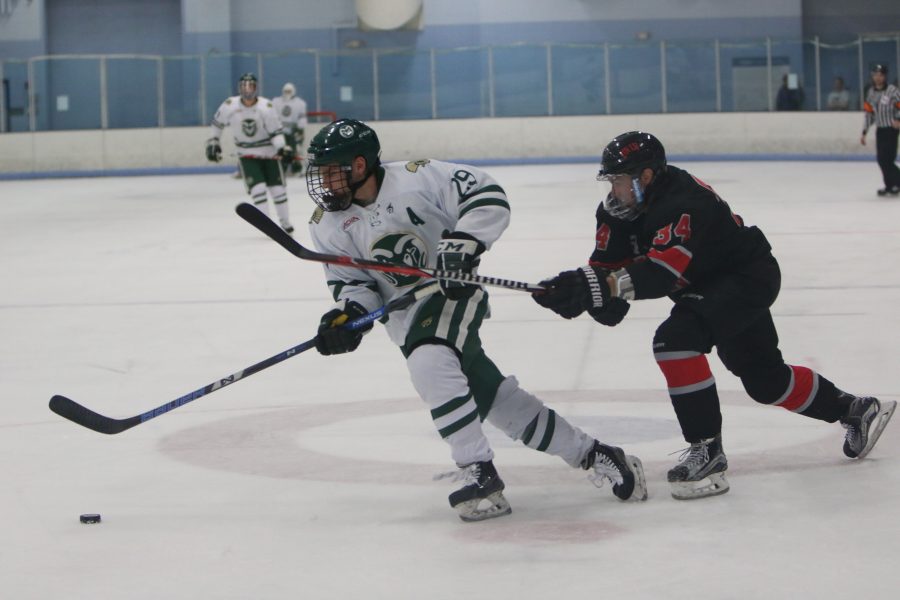 CSU forward Austin Ansay skates up the ice while playing against UNLV. The Rams lost to UNLV 5-3 on Dec. 2, 2017. (Jack Starkebaum | Collegian)

The Colorado State club hockey team faced tough competition over the weekend against No. 12 UNLV, dropping two games to the Rebels.

The first game did not go the Rams’ way as they struggled out of the gate against the Rebels. UNLV scored a goal early on in the first period and the Rams were never able to recover or gain any momentum back from that.

Following the first goal, UNLV scored two more during the first period to take a 3-0 lead at the end of the period.

The second period did not change fortunes for the Rams. After even play left the teams scoreless for the first half of the period, UNLV slid one past CSU’s goalie. UNLV added another goal before the end of the period to take a 5-0 lead into the break.

The Rebels went on to score one more goal in the third period to seal their 6-0 win over the Rams.

“We had a slow start we were never able to recover from,” CSU head coach Jeff Degree said. “They’re a very skilled team and a very fast team, but I feel that the game was closer than what the score indicated.”

The second game was a much closer battle between the two teams.

UNLV opened up the scoring in the game with a goal in the first period to take a 1-0 lead. CSU responded with a quick strike from Alec Orme to tie the game 1-1.

Only a minute later, however, UNLV responded to tie the game 2-2 at the end of the first period.

The Rams and Rebels exchanged goals in the second period, beginning with a tally from Ansay before UNLV tied it again before the end of the period.

CSU started the third period with a power play, but were unable to capitalize on the advantage during that time. When the power play ended, UNLV took control of the momentum and scored two more goals on CSU to wrap up a 5-3 victory.

“We played a very strong game,” Degree said. “I was pleased with the way we played, our effort was great but the power plays killed us.”

With their two losses this weekend, CSU sits at 7-14-2-0 on the season. They have a long break before returning to the ice on Jan. 18 to play the University of Arkansas at the EPIC Center in Fort Collins.

Collegian sports reporter Evan Grant can be reached by email at sports@collegian.com or on Twitter @EGrantSports.