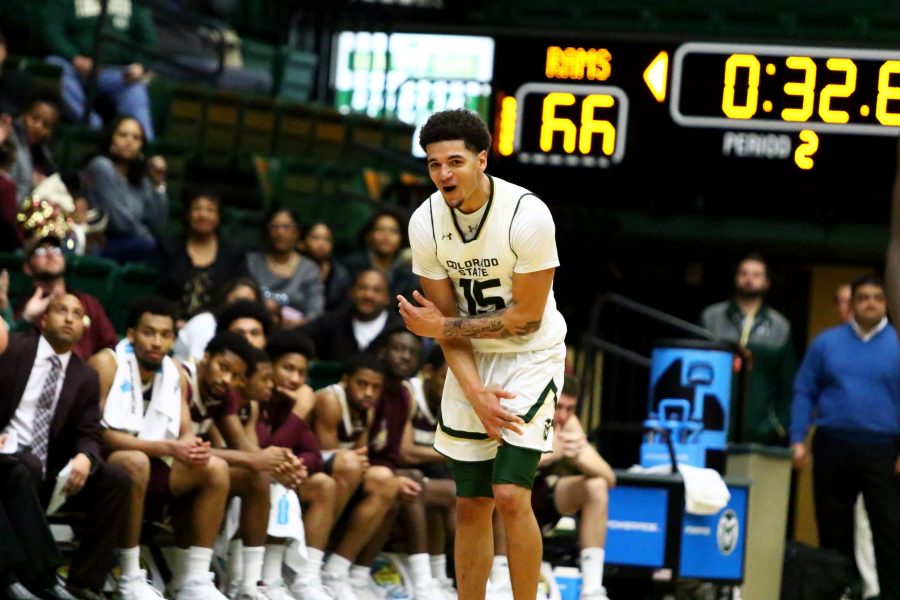 In a tale of two halves, a player unaccustomed to hogging the spotlight led the Colorado State men’s basketball team to a 66-58 victory over the Texas State Bobcats on Sunday afternoon at Moby Arena.

Redshirt sophomore Anthony Bonner matched a career-high 17 points to lead all scorers and carry the Rams to their fifth win of the season.

Not only did Bonner lead all scorers in the game, the guard also displayed extremely efficient shooting. Bonner went 4-of-5 from 3-point range, setting a career-high in converted 3-point attempts, and went 5-of-7 from the floor overall.

“I just needed something to build on and just tell myself to build on that,” Bonner said. “You know, that game is over, I have to be even better next game. I give a lot of credit to this dude next to me (Prentiss Nixon) and my other teammates. They just keep telling me, because I’ve been getting in my own head, to stay mentally tough and stay confident.”

Bonner’s performance was pivotal in the victory considering two of CSU’s three leading scorers, Prentiss Nixon and Jeremiah Paige, were ineffective. The two guards went 2-of-18 from the floor combined in the victory. Paige scored only two points and missed all six of his shots from the floor. Nixon was able to contribute 15 points because he knocked down all 10 of his free throws. However, the guard shot uncharacteristically poor from the floor, going 1-of-8 from beyond the arc and 2-of-12 overall from the floor.

“Our two starting guards were 2-of-18 and we still won and we won the way our teams win,” Eustachy said. “We really defended well and rebounded well. Guys made steps forward, like Anthony, who played more physical and harder.”

The Rams got off to an extremely hot start offensively and looked like they were going to run away with the game early in the second half. As a team, CSU made 15-of-27 field goal attempts in the first half. The 55.6 percent field goal percentage in the half was the highest for the Rams in a half so far this season.

The scorching start on the offensive end helped CSU build a lead as large as 13 in the closing minutes of the first half. The Rams went into the locker room leading Texas State 42-31 after trailing the Bobcats 24-23 with 6:52 left in the opening 20 minutes.

As he did for the entire game, Bonner led the way in the opening half. The guard was a perfect 4-of-4 from the floor at the break and already collected 11 points. Sophomore guard Lorenzo Jenkins also can be credited for the ideal start. Jenkins converted all three of his shots in the first half for seven points.

“It’s big. It just shows you that we aren’t just top heavy,” Nixon said. “We’ve got guys who can come in and be the leading scorer night in and night out. I think games like this builds his confidence (Bonner), it builds Doobie’s (Jenkins) confidence.

CSU struggled to maintain any of the offensive rhythm it had in the opening 20 minutes. The Rams began the half by missing their first seven shots before finally getting one to fall with 9:59 remaining in the game. Overall, CSU missed 15 of its first 16 attempts from the floor in the second half and shot 17.6 percent from the floor in the frame.

“I think we got a lot of open looks that we liked,” Nixon said. “They just didn’t happen to fall. It was one of those halves where things don’t fall, things don’t work out.”

The sudden lack of offensive chemistry allowed the Bobcats to creep back into the game. Texas State cut what was once a 13-point deficit to only three with 2:29 remaining.

However, Bonner’s final contribution in the game ultimately fended off Texas State’s rally and helped the Rams escape with a victory. With 33 seconds remaining, Bonner knocked down a three from the right corner after corralling an arid pass from Nico Carvacho to give CSU an eight-point lead. The shot put the game on ice and essentially defined Bonner’s brilliant performance.

“After I hit that first one in rhythm I was like, ‘Okay this might be a good day,'” Bonner said. “My teammates did a great job of finding me so I got to knock down that shot for them.”

Defensively, the Rams put forth their best performance of the season against Texas State. The 58 points allowed by the Rams is the lowest opponent point total against CSU this season. The Bobcats’ field goal percentage of 37.8 was also the third lowest against the Rams this season.