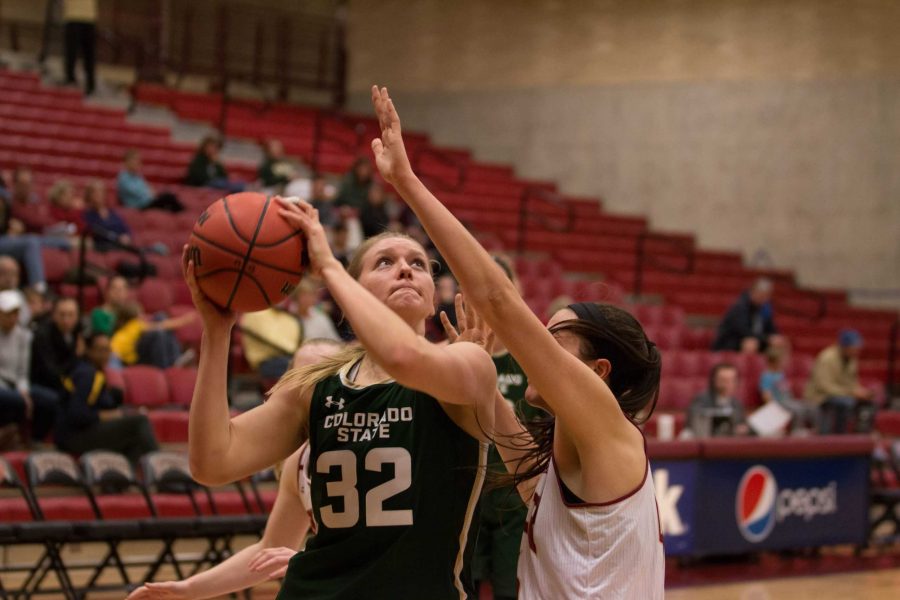 Approaching their showdown with the Rams, the Bears were riding high having won six of eight to open the year, including key wins over DePaul and Louisiana State. Coming into the game, they were undefeated through their first four contests in Greeley.

Held without a field goal for the first half of the second quarter, the Bears were relegated to outside shots by the zone defense of the Rams. In a game where they were dominant down low, the Rams were able to put pressure on every inside pass, forcing the ball back outside where the Bears were ice cold.

“Our post help was exceptional,” Williams said. “Leah (Davis) and Annie (Brady), Veronika (Mirkovic). What impresses me most is we always go into the game with two plans, plan A and plan B. So I just like how our kids executed our principles.”

Constant tipping and intercepting of Bears passes had the Rams rendering the Bears helpless as their offense was stalled. Going into the half, the Rams had forced five turnovers with senior Hannah Tvrdy leading the way with two steals. Along with the ball-hawking ways, the Rams held the Bears to 27 percent from the field, and seven percent from outside the arc.

“We went under one ball screen and gave up a three,” Williams said. “But, we did a really nice job of chasing them off the 3-point line.”

Going into the half, the Rams extended their lead to nine after a mere one-point lead coming out of the first. A 27-18 lead was a direct result of the Rams’ interior presence where they out-rebounded the Bears 25-11 in the opening half. The rebounding differential made up for the Rams’ nine opening-half turnovers, with a majority coming in the second quarter after a clean opening period.

The Bears came out of the half and implemented a full court press on the Rams, causing Williams to use an early timeout. Along with their defensive adjustments, the Bears began to find holes in the Rams’ zone defense, using cuts to the basket as a pivotal weapon. The Bears adjustments led them to cut the lead to only two points.

Even with a clean start to the game, the Rams’ youth reared its ugly head once again with the Rams turning the ball over 14 times in the game.

Despite mistakes, the Rams pulled away in the fourth quarter behind the offensive prowess of Brady who scored a career-high 20 points. A transfer for the Rams, Brady was inserted into the starting lineup over mainstay, Veronika Mirkovic. The switch allowed the Rams to prevail and control the ball down low without allowing the Bears to live at the free-throw line as they have become used to.

“We played really hard,” Williams said. “But, we played really smart. We anticipated really well, (we were) pretty aware and pretty alert to what was going on around us. We did a great job of locating shooters.”

After a split against in-state rivals in the week, the Rams moved to 6-3 with the win and 2-0 on the road. The Rams return home to Moby where they will get eight days to rest up for their matchup against Prairie View A&M Dec. 18. The Rams will follow it up with one more game at home before beginning their conference schedule.