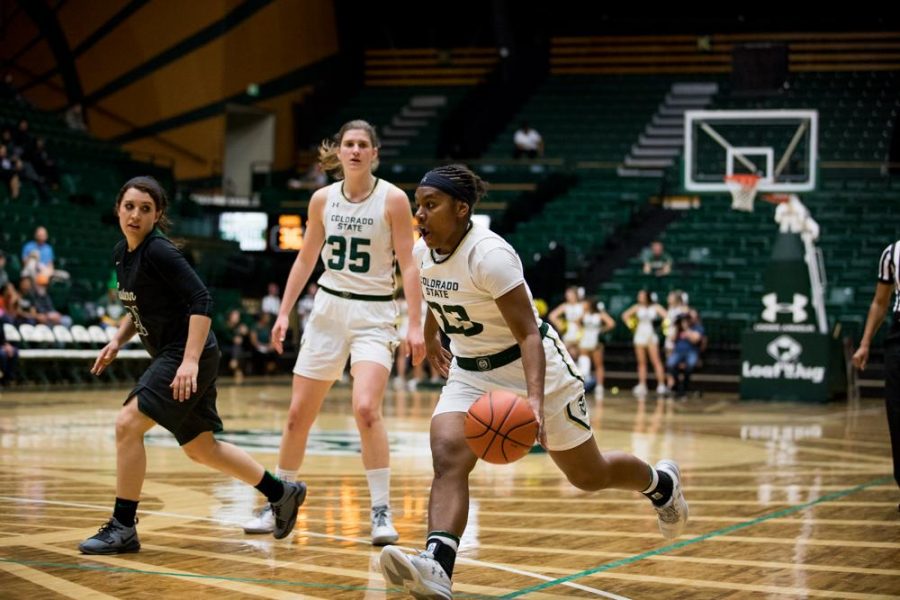 Redshirt Freshman Grace Colaivalu calling out for a teammate to take the ball. (Jordan Reyes | Collegian)

Redshirt freshman Grace Colaivalu joined the starting lineup and gave new life to the Colorado State women’s basketball team on its way to a lopsided 85-48 win over North Carolina Central.

Coming off a gritty performance against Oklahoma, coach Ryun Williams inserted Colaivalu into the starting five, and the Rams never looked back. Usual ignitor Sofie Tryggedsson was up to the task once again as she hit back to back 3-pointers to get the scoring started for the Rams.

The freshman duo of Colaivalu and Lore Devos led the way for the Rams from the start, with Devos dominating in the paint on both sides of the court. Devos racked up eight points and six rebounds in the first half, using her size as a virtue. Williams put the ball in Colaivalu’s hands early and often, having her bring the ball up for the Rams.

“Grace is just someone who gives a lot of energy,” Devos said. “She’s always there for the team and she helps us out a lot. I can learn a lot from everybody here.”

After senior leader Hanna Tvrdy voiced concern about defensive focus following the loss to Oklahoma, the Rams ceded little to the Eagles. In a game where the Rams’ offensive attack still lacked fluidity in the opening half, the defense became the focus, forcing 10 turnovers in the first two quarters.

The Rams hit just two of their first 11 shots from beyond the arc, and shot under 35 percent in the opening half. Their domination on the boards and on defense came to fruition as the Rams out-rebounded the Eagles 20-9 in the second quarter alone.

“The girls that went to the (offensive glass) really committed,” Williams said. “We kept a lot of balls alive, got some second chance points, got fouled, so I thought that was just good energy basketball.”

The frustration hit its boiling point for the Eagles as their bench was assessed a technical foul late in the second quarter, allowing the Rams to push their lead to 38-24 going into the final two periods. With the foul count favoring the Rams 15-5 in the first half, the officiating was called into question time and time again by the Eagles’ coaching staff.

Of the lopsided stats in the Rams blowout victory, the rebound differential served as the catalyst in a less-than-stellar offensive game. Devos, junior Annie Brady and senior Veronika Mirkovic led the way as the Rams out-rebounded the Eagles by 19.

The third quarter served as an opportunity to pull away and the Rams did just that, outscoring the Eagles 18-7 to push their lead to 56-31 going into the concluding quarter. As the Rams continued to push their field goal percentage up, the Eagles suffered an opposite fate, shooting a mere 13.3 percent in the third quarter, an indicator of the Rams’ bench stepping up.

“It was great to get a lot of kids on the floor,” Williams said. “Get them some game minutes and that’s how kids learn the best and the quickest. I thought as the game went on we started to play better.”

Finishing out the game strong, the Rams put in a handful of bench players to close it out. The closing quarter was the highest scoring for the Rams with 29 as the fatigue of the Eagles began to show. The Rams bench served as a change of pace, with defense being their strong suit. Devos and Tryggedsson were more than capable of picking up the slack, both scoring double digits.

“(Getting everyone minutes) is really important,” Tryggedsson said. “I think if we want to go far, we need everybody to play and it’s important for all of us to have minutes and just spread them out a little bit.”

The Rams head into their first road game of the year at 3-2. Traveling to Denver to play the Pioneers Thursday evening, the Rams will face one of many in-state opponents on their schedule that does not have them leaving the state of Colorado until January.