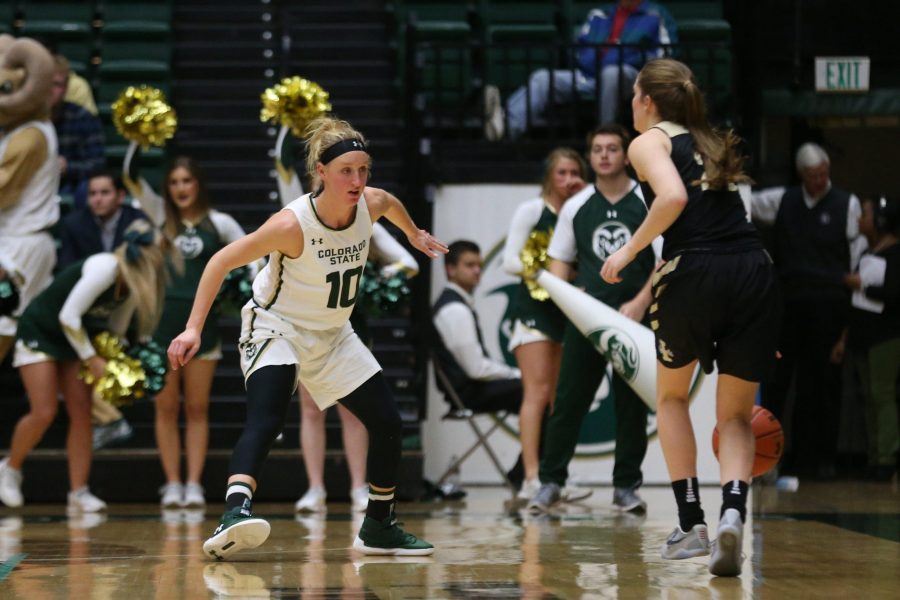 Senior Guard Hannah Tvrdy plays defense on a forward during the fourth quarter against the Idaho Vandals on Nov. 10. The Rams fell to Vandals 83-69 during the home opener at Moby Arena. (Elliott Jerge | Collegian)

After a long home stand, the Colorado State women’s basketball team will head out on the road for the first test of the season away from the confines of Moby Arena.

A 3-2 opening to the season that includes an upset over Gonzaga has the Rams riding a wave of momentum into their matchup against the University of Denver. Even though the game is within driving distance, the Rams will have their first true test of maturity on the young season.

Inconsistency amid a young team has been the lone downfall so far on a bright start to the season for the Rams. Going on her first road trip, freshman Lore Devos, who leads the Rams in scoring, will be leaned upon despite her college infancy. With an average of 12.6 points per game, accompanied by a team-leading 13 turnovers, Devos is adapting to the flow of college hoops and slowly growing accustomed to the new game.

“The road is always different,” coach Ryun Williams said. “It requires a different focus, you’re going to face some adversity, nobody is gonna be cheering for you. So it’s a real test and we need to be put in that situation, we need that.”

On the other end of the spectrum for the Rams, senior Hanna Tvrdy and junior Sofie Tryggedsson are leading by example on both sides of the court. As the facilitator of the offense, Tvrdy stands as the only returning player for the Rams that played over 1,000 minutes last season.

With veteran leadership on the team proving vital on their first road trip, a message has been given to the team through example in practice and preparation for their upcoming road trip.

“I think it’s about (the younger players) seeing whoever has been on the road before,” Tryggedsson said. “Just watching us and how it is to be on the road and I think it’s important that we get this road game before we start conference so it’s not so overwhelming.”

Coach Williams has created a dynamic duo for the Rams with the addition of redshirt freshman Grace Colaivalu into the starting lineup. A thunder and lightning pairing for the Rams, both players have brought the ball up and been allowed to create plays on and off the ball for a young Rams team.

Although Colaivalu has only gotten one start and has yet to break the century mark for minutes played, she is able to follow the tutelage of Tvrdy, who leads the team in minutes and has experienced the adversity that the road brings. Fellow senior Veronika Mirkovic has served as the leader for the Rams as well, as the main returning big down low.

The Pioneers are led in scoring by sophomore Madison Nelson, a forward that has height to rival any Ram defender. Nelson also leads the team in rebounds and will be a versatile cog in the Pioneer attack. With the Rams starting lineup failing to feature a single player taller than Nelson, the Rams will be put to the test on the inside.

“We’re trying to be more efficient offensively and defensively,” Williams said. “The biggest thing is awareness, our awareness of what the defense is doing, how they’re playing. It still has to improve and you saw that the other night but these kids are making progress.”

Denver and Greeley pose as the only road games of December for the Rams, but the foreign atmosphere still poses a threat. The Rams will head to Denver Thursday for their matchup against the Pioneers, tipping off at 7 p.m.