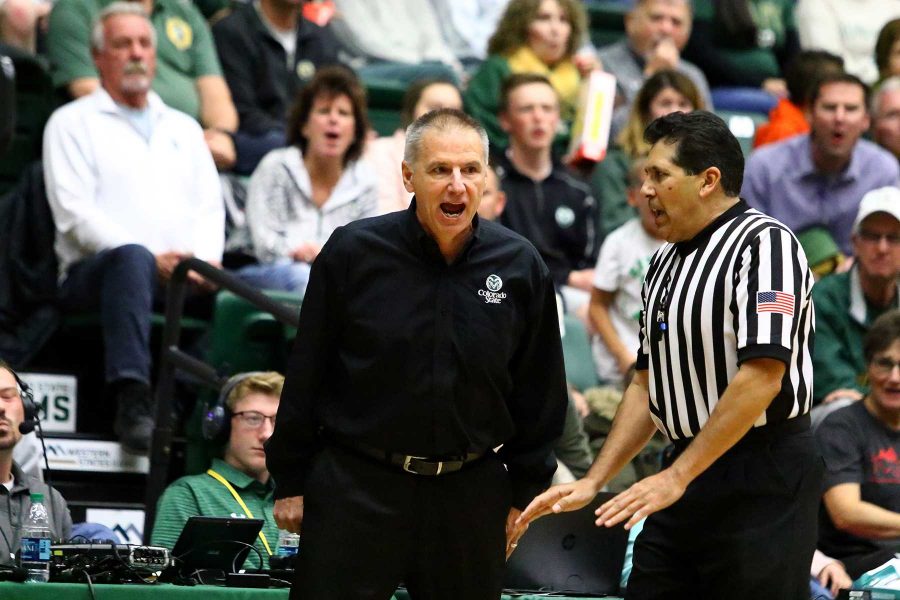 Head coach Larry Eustachy reacts towards a ref during the 2nd half of the Rams 80-76 win over Winthrop on Nov. 14 at Moby Arena. (Javon Harris | Collegian)

Nothing went right for the Colorado State men’s basketball team (2-1) Friday, as the Rams were dismantled by Tulane (3-0) 80-53 in the first game on the island of the 2017 Jamaica Classic.

The Green Waves started the game with a 9-0 run and never slowed down offensively. Led by guards Cameron Reynolds and Melvin Frasier, Tulane was able to do whatever they wanted with the basketball, finding ways to score from all areas on the floor.

In the first half alone, Tulane hit 8-of-15 3-point attempts for a total of 24 points which was ten more points the Rams scored at all in the half (14).

Contrarily, the Rams missed all eight of their 3-point attempts and started the game 1-of-17 from the field. CSU shot just 22 percent from the floor and trailed by 23 at halftime (37-14).

CSU did improve its shooting totals significantly in the second half, scoring 34 points in the final 20 minutes. But it was not enough to overcome the red hot Tulane offense and too many recorded turnovers (14).

While not much went right for the Rams in this game offensively, junior guard J.D. Paige was a lone bright spot for CSU.

Paige was extremely aggressive on the defensive end and consistently pressured the Tulane offense. He did not always get credit for a steal but the Colorado native’s efforts were crucial in keeping the Rams in the game at all.

Along with Paige, sophomore forward Nico Carvacho continued to perform well on the glass despite being limited by foul trouble. “The Big Chile” finished the game with eight points and seven rebounds. In the two games prior, Carvacho averaged nine points and a team-leading 17.5 rebounds.

The Rams will hit the court again on Sunday against Florida State. The game will tip off at 3 p.m. and will be televised nationally on CBS Sports Network. The matchup with the Seminoles provides Florida State-transfer guard Robbie Berwick an opportunity to play his former school.