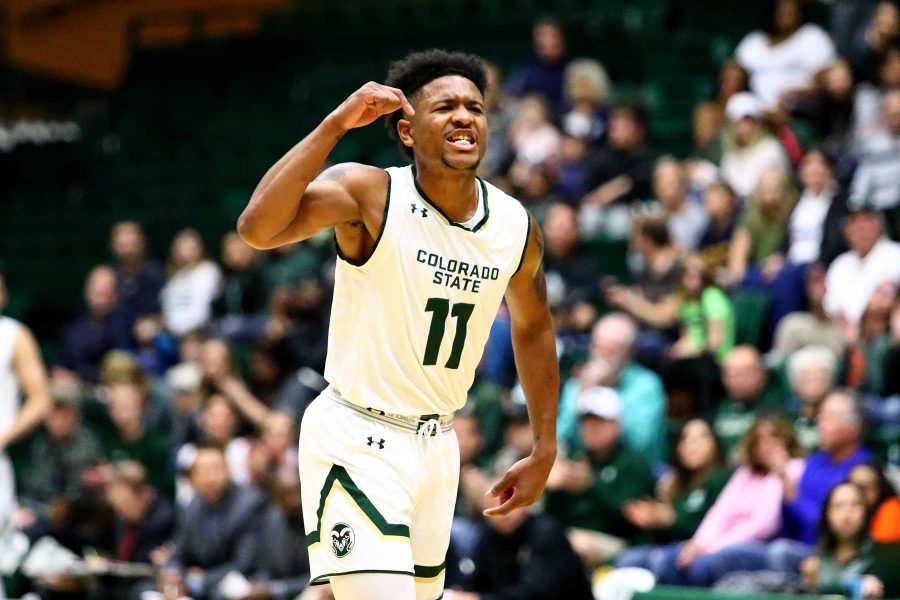 Junior guard Prentiss Nixon (11) yells at his teammate after a huge basket during the 1st half of the Rams 83-79 exhibition win over UNC. Nixon finished with 13 points. (Javon Harris | Collegian)

Colorado State men’s basketball (1-0) finished the second game of a Friday night double-header at Moby Arena with a 72-61 victory over Sacramento State (0-1). The Rams opened the contest with an 11-0 run over the Hornets and never looked back, handling the Big Sky opponent on both sides of the court and surrendering the lead only twice.

CSU forwards Nico Carvacho and Che Bob each sat for the majority of the first half after each picked up a pair of early fouls. Their presence was severely missed in the paint.

Bob played just five minutes but picked up three rebounds during that time. Carvacho was productive on the glass as well, adding four rebounds in only seven minutes. With both of CSU’s starting big men in early foul trouble, the result was a much closer game at halftime than head coach Larry Eustachy would have preferred.

“I think we are young. We showed it at times tonight,” junior guard Prentiss Nixon said. “Being up early and letting it slip away, we’ve still got a lot of room to grow.”

“You can see it with their body language,” head coach Larry Eustachy added. “They don’t handle adversity very well and it’s to be expected. We are really, really young.”

Coming out of the break with a slim 34-32 lead, the Rams’ big men were able to assert themselves back into the mix. Bob opened the second half with a pair of quick layups and five minutes into the half, CSU had re-built the lead back up to eight points.

From this point on the Rams were able to pull away from the Hornets, using efficient team basketball and aggressive play. It was not a great night shooting, as the team finished 24-of-63 (38 percent) from the floor, but what the Rams lacked in shooting they made up for in the paint and at the free throw line. Eustachy’s squad was an efficient 20-of-25 from the charity stripe.

“Terrible, that’s why we were 4-of-17 (from beyond the arc),” Eustachy said of his team’s shot selections.

Junior guard Prentiss Nixon led the way for CSU offensively. The Bolingbrook, Ill. native finished the night 5-of-13 from the field for a team-high 16 points. With the Rams’ big men in early foul trouble, Nixon was able to pick up the slack by playing 30-plus minutes before taking his first break on the bench.

“I loved the way we moved the ball,” Eustachy said. “We got it reversed. I think it would be shocking (to see) what we shot when we passed the ball over five times. It could be 80 percent-plus.”

Following the victory over the Hornets, CSU will host Winthrop on Tuesday, Nov. 14 in Moby Arena. Tipoff is scheduled for 7 p.m. MT.

Collegian Sports Director Justin Michael can be reached at jmichael@collegian.com or Twitter @JustinTMichael.