Rams looking to get back on track against Boise State 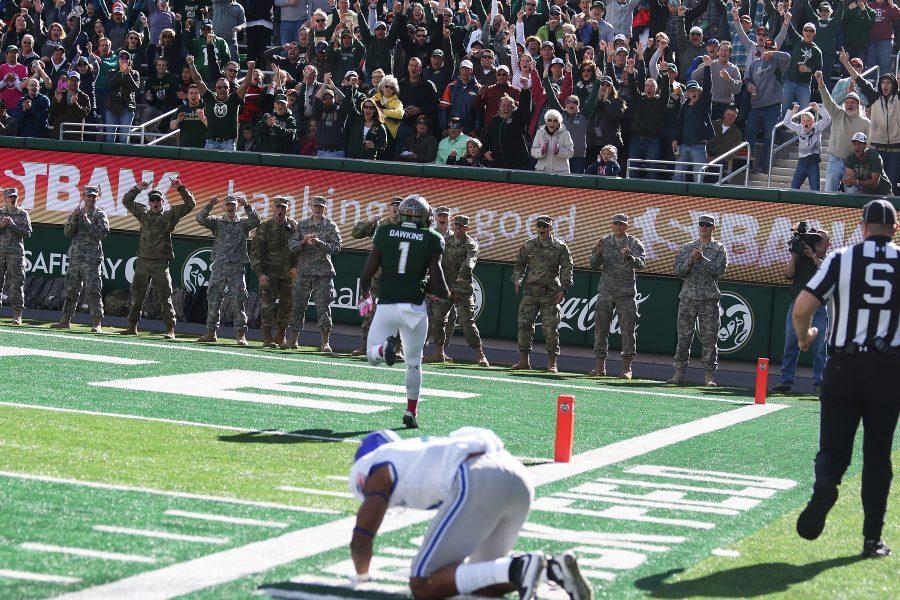 Running back Dayln Dawkins (1) lands in the end zone for the first touchdown of the game early in the first half. (Javon Harris | Collegian)

Coming off losses to Air Force and Wyoming, Colorado State football now turns its attention to Boise State, an opponent that the the Rams have never defeated. With the Broncos coming to town, the stakes are always raised for CSU. But 2017 provides a particularly important matchup for the green and gold.

After being embarrassed by Air Force at home and then losing in heartbreaking fashion to the Cowboys in Laramie, Wyo. last weekend, it would be very easy for this team to simply lay down and allow the Broncos to cruise into the Mountain West Championship.

But with a national TV audience and brand new alternate uniforms, both CSU players and coaches are hoping to put the last two weeks behind them and go compete with one of the conference’s perennial powerhouses.

“As a team, I think that the (Boise State) games have been kind of a downer for the last four or five years,” center Jake Bennett said. “Beating them would be something that’s never been done before, so I think guys are taking a lot of pride in that.”

Head coach Mike Bobo added similar sentiments, emphasizing that despite the team’s recent shortcomings, everyone in the Colorado State locker room has kept their edge. The team has competed well in practice throughout the week and now the mission is to execute on Saturday.

“Usually when you get out under the lights there is a little bit more energy,” Bobo said. “It was a little bit chilly but it wasn’t too cold. I think the guys moved around and competed well.”

While practicing under the lights may help raise the energy in practice and help prepare the team to once again play in the cold, it does little to help prepare the Rams for one of the most explosive and physical teams in the conference. Bobo knows that if the team comes out flat against the Broncos, they could potentially be in for a long night.

Boise State is extremely efficient with the football and can put big points on the board in any given matchup. Coming into the game, the Broncos have gone over four straight games without throwing an interception and have scored 30-plus points in three of the last four games.

Defensively, the Broncos are a fast and physical unit that knows how to limit an opposing offense. In nine games this season, the Broncos have surrendered more than two scores in a single game only two times, their only losses on the season.

If the Rams are going to reign supreme over the Broncos for the first time in program history, putting up big numbers offensively may be the key. In games where CSU scores at least 20 points, the Rams own a record of 6-2 in 2017.

However, putting the points on the board may be slightly more difficult for a CSU offense that will be missing its red zone finisher in running back Izzy Matthews. That said, without Matthews in the mix, an opportunity is presented for senior running back Dalyn Dawkins.

“This year we have had a lot of explosive plays through the run game,” Bobo said. “Obviously what we do helps that, being balanced and the way we throw the ball. But our running backs at the line of scrimmage have done a terrific job. Particularly Dalyn Dawkins.”

Along with looking to attack the Broncos on the ground, the Rams will look to re-establish themselves as a dominant passing offense. Statistically, Nick Stevens has been one of the more efficient players in the conference this season, but the senior quarterback has cooled off significantly over the last month.