On the road to redemption, Che Bob has found his role with CSU 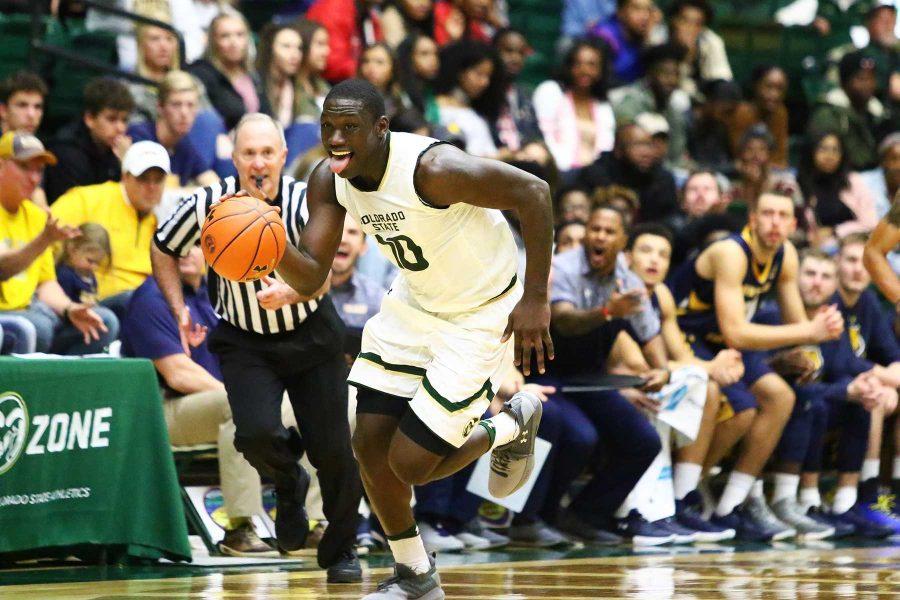 Che Bob (10) races up the court with his tongue out after a defensive steal during CSU's 83-79 win over UNC. Bob finished with a team high 25 points. (Javon Harris | Collegian)

Though it took some searching, the lone senior on Colorado State’s men’s basketball team has found his role in Fort Collins. Now entering year two at the Division I level, Bob’s confidence is soaring.

It wasn’t long ago that he was one of three Rams ruled academically ineligible for the second half of the 2016-17 season. Along with former Rams Devocio Butler and Kimani Jackson, Bob failed to attain the necessary grades to play for CSU.

And so the journey began. The 6-foot-6, 220-pound forward missed the final 15 games of the regular season and watched as his teammates moved through the Mountain West Tournament and into the NIT.

The more time he missed, the larger his yearning to play grew. It’s something that guard Prentiss Nixon noticed in Bob throughout the difficult process.

“It made him hungry,” Nixon said. “It made him not take this thing for granted and really just get down and get to work. It’s paying off right now.”

If the first two exhibition games are any indication, that renewed work ethic is certainly paying off. In the team’s first exhibition against Colorado Mesa, Bob led the Rams with 28 points in 31 minutes of action. He added 13 rebounds while shooting 60 percent from the field. Then against Northern Colorado, Bob again led the Rams in scoring, this time with 25.

Bob showed glimpses of promise both before CSU and in his first year as a Ram. As a sophomore at South Plains College Levelland, Texas, Bob averaged 16 points per contest and earned All-Western Junior College Athletic Conference First Team honors.

Through his first 16 games as a Ram, Bob eclipsed the 20-point mark twice and averaged 8.5 points per game. Had he played and maintained that average for the rest of the season, he would have finished fifth on the team in scoring.

After being sidelined for half of the season, Bob envisioned his long-awaited return.

“With my situation last year, I was ineligible for the second half of the season,” Bob said. “I waited a long time to get back on the court and prove myself.”

Perhaps the most noteworthy thing of Bob’s early performances this season is his propensity to get to the charity stripe. Through the exhibitions, Bob accumulated 27 attempts from the line, converting on 20 of them.

Playing with more aggression so far, this could be just the beginning to Bob’s offensive prowess.

Though Bob said he always envisioned himself as an offensive threat, his development on both sides of the court is noticeable. The bruising forward still has more than enough strength to battle in the low post. But Bob’s expanded range adds another tool to his scoring arsenal.

The long, physical forward proved he was more than just a threat down low, and it’s something Eustachy hopes to see in Bob as the season progresses.

“Emmanuel was not allowed to do anything but dunk the ball in junior college. So was Che,” Eustachy said. “So that’s another reason why you do expand your game, and he’s expanded it. He’s got a lot of freedom.”

Bob’s progress on the offensive end is encouraging, but his improvement on defense is something he worked on even more vigorously leading up to the season. Last season, his time on the court was limited due to his defensive ineptitude, Bob said.

He made the necessary improvements this offseason to stay on the court and impact both ends of the floor.

“Last year, my time was limited because of my lack of defensive positioning, knowing where I’m supposed to be,” Bob said. “I spent some extra time with (assistant) coach Willie (Glover) and coach Eustachy and I found my niche and found out the position I need to be defensively.”

Once again, the effort seems to have paid off. In two games, Bob has recorded three steals and two blocks while leading the Rams in minutes in both games. While it is just an exhibition, Bob’s ability to recognize weaknesses in his game and improve upon them is certainly an encouraging sight.

As the regular season lies on the horizon, Bob’s leadership on the court is paramount. Players like Nixon, J.D. Paige and Nico Carvacho are the unquestioned leaders of this team. But adding another veteran leader to that mix in Bob would negate the losses of Omogbo and Gian Clavell.

While he continues to settle into his newfound role with the Rams, Bob may soon be forced to deal with something he has not experienced in the last few years: success.

The script has been largely negative for him to this point at CSU, as Bob has forced himself into an abnormal amount of adversity in Fort Collins. Battling through his struggles, Bob now finds himself on the cusp of completing his redemption.

Eustachy notices the tides changing for the senior. More importantly, as a man who has overcome his fair share of downfalls, he understands how to keep Bob on the straight and narrow.

“When he first got here, it was just a struggle with him to get him to even be coachable. But he’s engulfed and believes in us, and we believe in him,” Eustachy said. “I think now he’s up to a new level of challenge of how he’s handling success. He’s got the perfect tutor, he’s got the perfect teacher on how it works.”