Herz: Yuli Gurriel’s slap on the wrist proves MLB does not have priorities straight 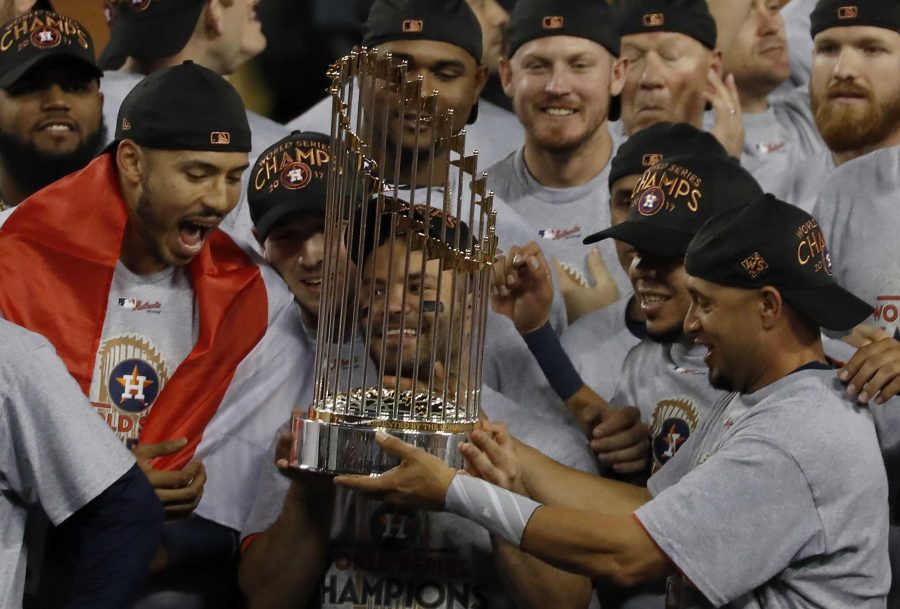 The Houston Astros celebrate after a 5-1 win against the Los Angeles Dodgers in Game 7 of the World Series at Dodger Stadium in Los Angeles on Wednesday, Nov. 1, 2017. (Luis Sinco/Los Angeles Times/TNS)

The outcome of the 2017 World Series may have been decided close to a week ago, but Yuli Gurriel’s actions during Game 3 of the fall classic and the MLB’s handling of the situation should not be forgotten.

Gurriel was blatantly caught on camera making a racist gesture towards Los Angeles Dodgers’ Japanese-American pitcher, Yu Darvish. It was also reported that Gurriel used the term “chinito”, which translates to “little Chinese boy”, to describe Darvish in the dugout during the World Series.

MLB Commissioner Rob Manfred responded by suspending Gurriel for the first five games of the 2018 season, even though at least two games remained in the 2017 World Series.

The punishment inflicted by Manfred was nowhere near harsh enough and sends a terrible message.

Manfred’s explanation of his decision entails that he didn’t want to hurt the entire Astros team because of one player’s actions. Though this is a valid argument in certain circumstances, it is far from acceptable in this case.

Handing a five-game suspension to Gurriel at the very beginning of a 162-game season essentially means nothing. Even if the Astros go 0-5 during that span, it likely won’t affect the outcome of their season. This means that Manfred truly didn’t take the incident seriously, undermining the gravity of the incident.

There is no denying that immediately suspending Gurriel could have affected the outcome of the World Series and stripped Houston of its first championship in the franchise’s 55-year history. However, in order to reflect that Gurriel’s actions were intolerable, the star first baseman needed to sit out for the rest of the World Series.

Gurriel’s derogatory actions are not acceptable in any circumstance, and especially not in this day and age. The MLB sent an awful message to every Asian-American. And ironically enough, Houston has the fastest growing Asian population in America, with an annual growth of around 5.7 percent over the last few years. In total, there are over 500,000 Asian-Americans living in Houston, all of which should be disgusted by Gurriel and even more appalled at the MLB’s handling of the situation.

To make matters worse, Gurriel didn’t even seem like he cared once he learned that his actions were caught on camera. Veteran teammate Carlos Beltran had to explain to Gurriel that he should show sympathy in response to the situation. The fact that Beltran had to tell Gurriel this says a lot.

Gurriel may be from Cuba, a very different culture than America, but the first baseman is 33 years old and has now lived in America for two full years. He should know better and he clearly didn’t learn from his actions. If the MLB gave him appropriate repercussions, maybe he would have learned something. But since the MLB completely diminished Gurriel’s consequences, there is no way he learned anything.

Do you really think sitting in the dugout for five games next season with a shiny World Series ring on his finger really upsets Gurriel? Absolutely not.

Had the MLB suspended Gurriel and the Astros lost the World Series, the team and its fanbase would certainly be frustrated. But regardless, Gurriel should not have been allowed to see another pitch in the World Series after his actions. The fact that this occurred during the World Series should be irrelevant.

Whether Gurriel acted this way in April or October, the MLB needs to respond appropriately and show the Asian-American community that these derogatory actions are unacceptable.

Manfred did not do that, though. Instead, he prioritized the outcome of the game over multiple blatant acts of racism committed by Gurriel.