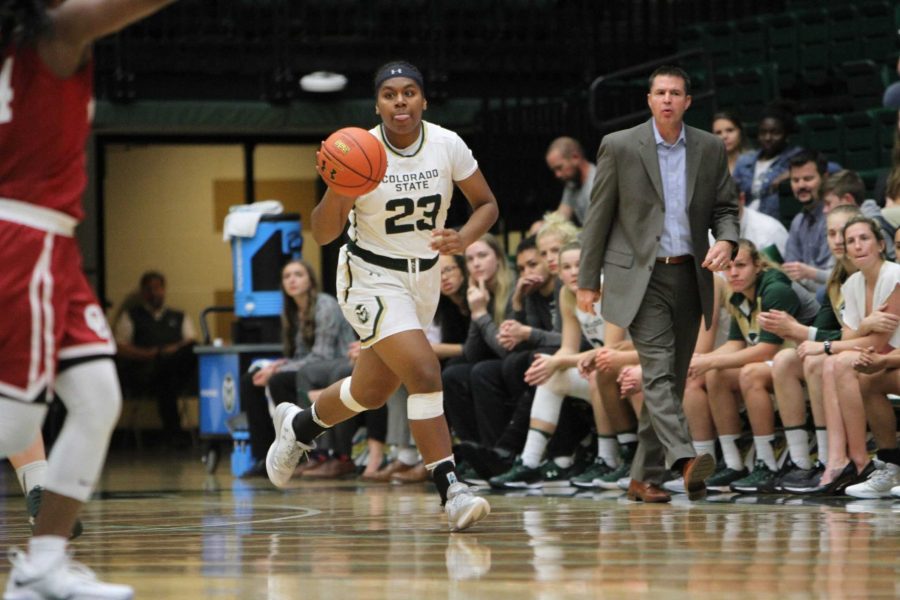 In the first game away from Moby Arena, redshirt freshman guard Grace Colaivalu shined for a team-leading 13 points and four assists in the Colorado State women’s basketball team’s 61-56 win over Denver at the Hamilton Gymnasium in Denver.

The Rams’ victory is their fifth consecutive win over the Pioneers and their eleventh win versus an in-state opponent in their last 12 opportunities.

CSU and Denver struggled out of the gates offensively on Thursday night before Colaivalu opened the scoring with a field goal three minutes into the contest. Colaivalu tacked on the Rams’ next two baskets, but was the first Ram to sub out after accumulating two personal fouls in the first six minutes.

Colaivalu did not let the early foul trouble get to her aggressive mindset, though, and remained a key factor for the Rams throughout the evening.

“Sometimes you get into foul trouble, but that can’t keep you from trying your best and trying hard each play,” Colaivalu said. “I just tried not to go for the highlights on the blocks and that kind of kept me out of foul trouble.”

With Colaivalu on the bench, the Rams shot 53 percent from the field for the rest of the opening frame, highlighted by a Stine Austgulen 3-pointer to give the Rams a 19-12 lead. Though Austgulen’s three hit nothing but net, the Rams failed to convert from downtown for the remainder of the half, going just 1-of-14.

The Rams appeared like they were starting to pull away at the end of the first, but a Ciera Morgan layup at the buzzer kept it a two-possession game heading into the second quarter.

Callie Kaiser built the Rams’ lead back up to seven early in the second, but Jordyn Alt led the Pioneers on a 7-0 run to knot the game at 23. Redshirt senior Hannah Tvrdy squashed Denver’s run with a highly contested layup as the shot clock buzzer sounded late in the second quarter and the two sides went into the break tied at 25.

Despite a 7 percent mark from beyond the arc in the first half, Tvrdy got the Rams out of their 3-point funk with a wide-open look in front of her bench.

“Coach challenged us at halftime,” Tvrdy said. “We were getting great shots in first half they just weren’t falling in. He’s like, ‘You know it’s just your mindset,’ so we really just wanted to come out in second half still shooting because they are going to fall eventually and that’s what we did.”

As a team, the Rams shot 67 percent from three in the third quarter, led by a pair from Hannah Tvrdy and Stine Austgulen. While clicking on both ends of the court, CSU played much of the third quarter with a double-digit advantage and entered the final frame with a 52-36 lead.

The Rams built their lead up to 18 early in the fourth, but the Pioneers soon cut it to just four amid a 14-0 run, featuring four straight possessions in which Denver converted from three.

Despite Denver’s prolific run, head coach Ryun Williams didn’t think his team was taking their foot off the gas.

“I think DU made a lot of tough shots with the three-ball,” Williams said. “They went to a four-guard lineup and really stretched us defensively and made some really difficult threes. I’d give DU more credit than the mistakes that we made.”

With four minutes to go and a four-point advantage, Stine Austegulen netted her third three of the game to make it a three-possession game. Denver’s Lauren Loven responded with her team leading third three-ball, but that’s the closest the Pioneers got against the Rams’ stout defense.

With just over a minute reaming, Sofie Tryggedsson came up with her lone steal of the game to set up Colaivalu for a layup to put the game out of reach.

“We have some poise to this team,” Williams said. “Although there was some inexperience out there, I thought our leadership and did a great job making sure this team didn’t get rattled and made sure we got to the finish line.”

The Rams head back to Moby for a showdown against BYU on Saturday at 2 p.m.