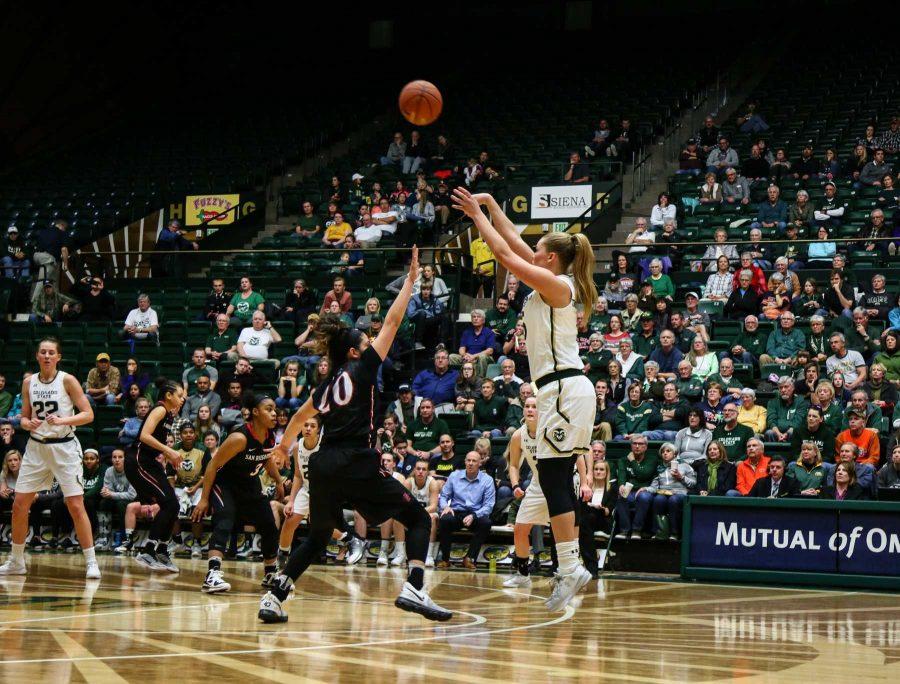 In a parade of shots for CSU women’s basketball, a true firework emerged and lit up the gym for the Rams coming off the graduation of two stars.

With the loss of roughly half their total scoring from last season, CSU women’s basketball has found their new offensive fire starter in junior Sofie Tryggedsson and embraced the power of the well-timed 3-pointer in the face of adversity.

In college basketball, graduation serves as the doomsday for many teams, an ultimate test of a culture. With the loss of key players, new leaders are expected to emerge without missing a beat. Leading such a young team, Tryggeddson and her fellow upperclassmen have continued the tone of winning and excellence in Moby Arena.

As a team that dominated in the mid-range and post game last year, the Rams have lost some of their size this year and in turn adapted a new mindset, one of finding the open player and getting the best shot possible, inside or out.

A common trend in basketball, the 3-point shot has become the spark plug for the engine that is offense in present day play. Tryggedsson, the Rams fifth-leading scorer from last season, has risen to number two on this year’s team to this point, with a large lead in 3-point makes.

“When we need a three, she’s one that can give it to us,” senior guard Hannah Tvrdy said. “We always know if we give it to Sofie, more than likely it’s gonna go in so when we are having (hard) times offensively where we can’t get a shot, we know that Sofie is a really good option for us.”

A sniper from beyond the arc, Tryggedsson makes a living over 20 feet from the basket and serves as the pilot of each crowd the team draws. On the road, Tryggedsson can bring silence over a crowd with a dagger from deep, while the Moby faithful come to their feet with a stalwart roar with each made shot.

On a team where Ellen Nystrom and Elin Gustavsson led the team in scoring by a wide margin and aided the Rams on the boards each game, Tryggedsson still stood second on the team in made 3-pointers. Though she only started 17 games last season, she has yet to come off the bench this year, serving as a staple in the fluctuating Rams lineup.

Tryggedsson has pushed the Rams to top five in 3-point field goal makes on the season (43).

As a junior, Tryggedsson was able to spend two years next to two of the premier stars in Colorado State women’s basketball history in Nystrom and Gustavsson. Learning from their tutelage and applying their game to her own was vital to the success that Tryggedsson is experiencing to this point.

“They brought different qualities to the team,” Tryggedsson said. “Ellen really led by example, she always said the right thing at the right time. Their mind set was always, ‘We’re gonna win this game and do as well as we can,’ and that’s something they definitely (left) with this program.”

Not to be ignored, a silent but deadly aspect of Tryggedsson’s game is her perimeter and interior defense. As a bigger guard for the Rams, coach Ryun Williams has placed extra responsibility upon the shoulders of Tryggedsson and relied on her to set the tone defensively for a young Rams team.

“She guards the shooters for us which is really important,” senior forward Veronkia Mirkovic said. “Since we’ve seen film and we know what (other teams) can do, they’re not able to since she’s got them. It makes us think, ‘Hey I need to step up, my player is not going to score either.'”

In a year where the Rams have dealt with losing two of their longer and taller players, Tryggedsson has kept the culture of excellence intact and propelled the Rams to hold their opponents to a .337 shooting percentage from the field, and the lowest points allowed as a team in the Mountain West Conference.

With an added dimension of perimeter defense, Tryggedsson has also aided the Rams in their feat of holding opponents to the third lowest 3-point percentage in the conference (.280). Being on the court has become a necessity for a young Rams team and Tryggedsson.

“Everybody looks at Sofie and they look at a shooter,” Williams said. “Sofie’s a really good defensive player. She’s our best perimeter defender, I’m not sure (it gets noticed). That’s why it’s so hard to not have her on the floor a lot.”

As a newfound leader for the Rams and their young nucleus, Tryggedsson’s fire on both sides of the court continues to push the mindset of consistency forward and add a new level of maturity to a team seeking guidance.

Being recruited out of Denmark, Tryggedsson was brought to the Rams to continue the same game she featured prior to college. Williams sought to allow her the freedom to shoot, while pushing lessons upon her from the CSU women’s basketball lesson plan. Atmosphere and culture were the main draws for a foreign player looking for a basketball home stateside.

“There was a good culture around here,” Tryggedsson said. “We have a lot of fun with the team and we just play hard and just want to go out and win. There was a tradition of winning with this team and it’s something I wanted to be a part of.”

A mainstay in the starting lineup currently, Tryggedsson started on the bench her freshman year, taking lessons from the players who took the court every night. Instead of getting down on herself, Tryggedsson used it as a learning opportunity and a drive for the future.

With another year remaining after this one, Tryggedsson will be relied upon heavily to overcome two large and influential graduating classes. Tryggedsson will look to become the stabilizer and harmony of the Rams.

“It’s a good pressure, I want to take more responsibility,” Tryggedsson said. “We’re not gonna grow if we don’t get more responsibility so it is a good kind of pressure and it’s been on a lot of us because there was no, ‘Oh this is gonna be our new Ellen.’ It’s kind of open for everybody.”

With a 3-2 start for the Rams, including an upset over Gonzaga that was led by daggers from Tryggedsson, the Rams have continued their winning culture. As the season continues, they will lean upon their returning players, including new, every-game starter Tryggedsson.