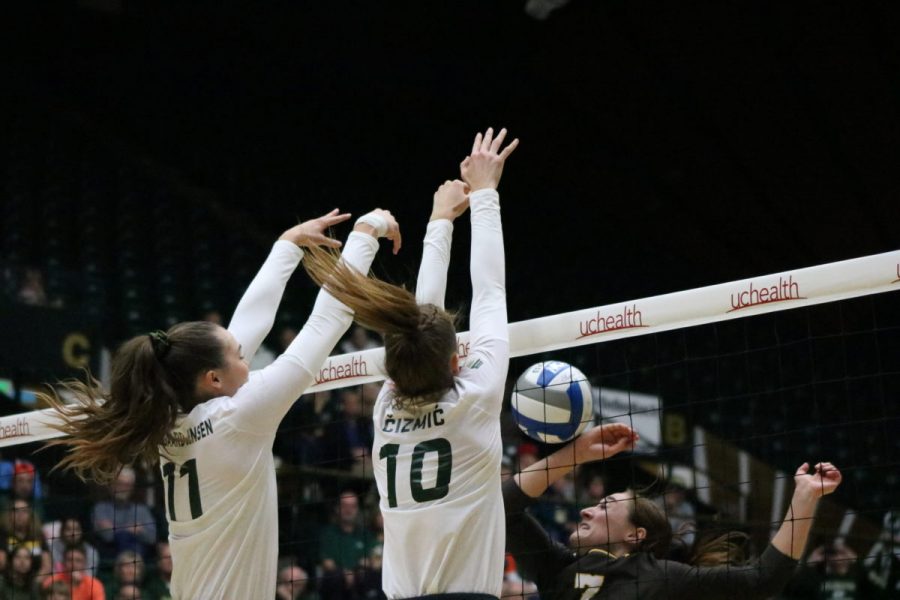 Paulina Hougaard-Jensen and teammate Sanja Cizmic go up and get a block during their win against Wyoming in the Border War. (Joe Oakman | Collegian)

Culture in the United States is different from any place on the planet. And apparently Americans’ love of a particular condiment is unique, at least in the eyes of Colorado State volleyball’s Sanja Cizmic.

“A lot of ranch, we don’t have ranch,” Cizmic said. “Food was a big (culture change), especially going to dorms. I was eating just salads and chicken my first month here.”

Cizmic hails from Split, Croatia and travelled 5,579 miles to the U.S. in fall of 2014 to begin her playing career for CSU. A change in culture would be expected to be a huge obstacle for someone coming from a place so vastly different, but since she played with American teammates on her volleyball teams back home, Cizmic had an idea of what she was getting into.

Still, America presented a completely new home that required quite a bit of paperwork to fill out to even come over. Once here, fellow senior Jasmine Hanna remembers meeting the Croatian and trying to figure out some of the questions she asked. One specifically dealing with local animals.

“One of my first memories of her is that we were driving together and she was asking me about some sort of animal that we had,” Hanna said. “She’s like, ‘It’s the really porky animal.’ It was probably 15 minutes of me trying to guess what it was and come to find out it was a porcupine.”

The outside hitter did know what kind of program she was getting herself into. At the time, the Rams were coming off their 19th consecutive trip to the NCAA tournament and dominated the Mountain West Conference every year. Head coach Tom Hilbert even made a trip to Slovenia in order to convince Cizmic to move Fort Collins.

That type of dedication to her and the success of the program played a major role in Cizmic deciding to be a Ram. Colleges in Croatia did not allow for her to go to school while also playing volleyball, so the decision seemed pretty simple.

On the court, Cizmic has been instrumental in the Rams’ march towards a 23rd consecutive NCAA tournament, which they clinched last Saturday by winning the conference again. Earlier in the year, Cizmic was named Player of the Week by the AVCA after putting up 35 kills in a three-match weekend, 13 of which came in the Rams’ sweep of then-No. 16 Michigan.

Her role is larger than getting kills on the court, however. Both Hilbert and Hanna echoed the statement that Cizmic is the “team mom.” She is constantly checking on her teammates to see how they are doing and learning about who they are.

“She’s been like a team mom from the minute she walked in the door,” Hilbert said. “That’s what we are going to miss the most about her. She’s a great leader and a great person and she’s a servant leader as well as being a great player.”

“That’s how I was raised, that there is always a why behind something,” Cizmic said. “I’ve always tried to understand some of the teammates and why someone is the way they are so that is probably why they say I’m the mom of the team.”

That motherly role expanded a couple years ago once sophomore Paulina Hougaard-Jensen joined CSU. The Denmark native came 4,848 miles to become a Ram, and Cizmic was there from the beginning.

“I remember last year when I was really homesick the first semester I talked to her about it,” Hougaard-Jensen said. “She was comforting me and was like, ‘It’s going to get better.’”

As with Cizmic, Hilbert made a similar trip out to Copenhagen to recruit Hougaard-Jensen to Fort Collins and she was hooked. She described how people in Denmark do not pay too much attention to volleyball, as seen by the couple hundred people who would show up for the championship matches she played in. An average attendance of around 2,000 from the CSU faithful at Moby Arena was a huge plus.

“Our federation made these rules that all the games you had to have 150 people watching otherwise you would get a ticket,” Hougaard-Jensen said. “We would get tickets all the time…the biggest game I played in Denmark, like the championships, we probably had less than Moby on a bad day.”

The middle blocker has quickly become a centerpiece for the Rams after injuries to fellow middles Kirstie Hillyer and Alexandra Poletto thrusted Hougaard-Jensen into the spotlight. She has responded well by having a .466 hitting mark which ranks third in the entire country. Her 1.32 blocks per set also ranks second in the Mountain West.

“She’s a person that if I say, ‘You can’t do this, you’re not good enough at this,’ then she will spend the next two months trying to prove you wrong,” Hilbert said. “She comes to practice every day wanting to get better. She almost has a chip on her shoulder all the time like, ‘I have something to prove.’”

The European duo is quietly putting their mark on the No. 19 team in the nation. Most of opponents’ attention goes to the other outside attackers in Breana Runnels and Hanna who are the top two Rams in kills. Instead of focusing on Hougaard-Jensen, teams look at the 6-foot-6 inch Hillyer and worry about her.

But the interest in culture goes both ways as Cizmic and Hougaard-Jensen’s teammates were certainly curious about life in Europe. Over the summer, the team got to find out those answers for themselves.

The Rams toured across the continent playing some local clubs and national teams while also enjoying their summer vacation. The second stop on that trip?

“I thought it was really cool, even Tom said that he now realizes why in some situations I am the way that I am,” Cizmic said. “I made them all jump into the water because they were scared of sharks…it was really fun, I really liked it.”

“You remember certain things in your coaching career about certain players and that I will remember forever,” Hilbert said. “It helps the other way, too, because the players learn a whole different side of her. They understand who she is and why she is the way she is so I think that was so cool to watch that happen.”

Cizmic showed her closest friends, her teammates, exactly what her life was like and introduced them to her family and friends. Even Hougaard-Jensen, who said she has been all around Europe, had never been to Croatia.

“This team that we have right now, we are basically the same team that we were last year and that’s probably the closest team we’ve had at CSU in a long time,” Cizmic said. “I wouldn’t say it brought us closer because we were already really close but I would say it definitely helped us work through some situations together.”

The Rams will need that kind of unity at the start of December when they embark on the challenge that is the NCAA tournament. The deepest a CSU team has ever been is the third round, meaning it will take quite an effort from this group to do something CSU has never done.

For now, the team and their Euro duo will focus on getting better and maybe staying away from all the ranch dressing that the U.S. has to offer.