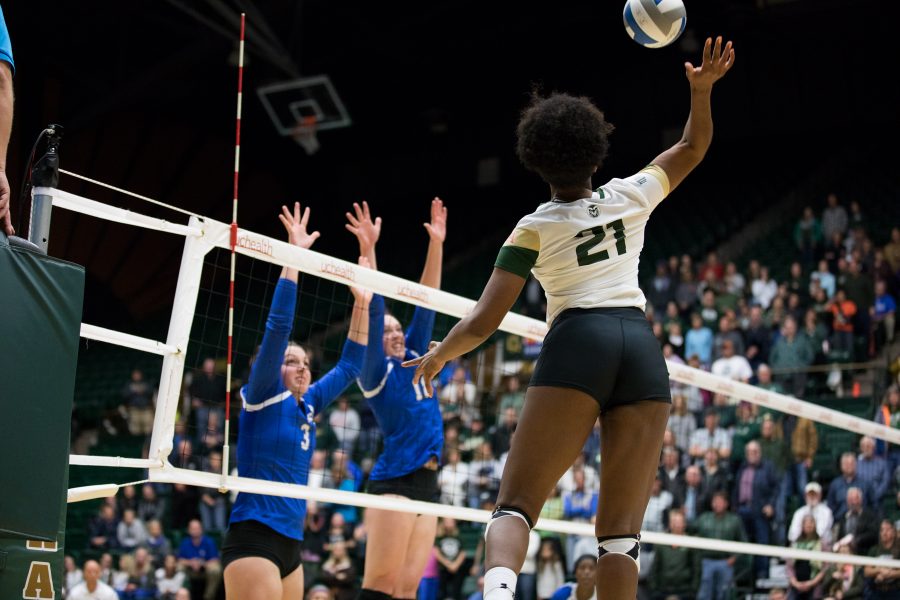 Redshirt Sophomore Jessica Jackson about to make an attack against her opponents. (Jordan Reyes | Collegian)

The NCAA Volleyball Tournament does not start until Nov. 30, but the No. 20 Colorado State Rams might clinch a spot in the bracket this week when they take on the Utah State Aggies and the Boise State Broncos. CSU has made the postseason 22 consecutive times and anticipate this year being no different.

The Rams are currently 12-0 in conference play which is four games better than the Wyoming Cowgirls in second at 8-4. A conference clinch could come Thursday against the Aggies, but the Rams would need Wyoming, San Jose State and San Diego State to all lose that day as well.

If that scenario does not happen, the Rams can still clinch if they beat Utah State and defeat the reigning Mountain West champs, Boise State, on Saturday.

Picking up both wins is not a given, however, as Boise State is one of only five teams to push the Rams into a five-set match this season. The Broncos took the first two sets of their earlier conference match back in Boise in early October. The Rams came back to take the final three sets, highlighted by sophomore Kirstie Hillyer getting a solo block on the Mountain West’s all-time leader in kills, Sierra Nobley, to give the Rams a 16-15 lead in the fifth set. CSU won the match on the next point.

Nobley thrashed the Rams for 24 kills last time, but this was more of a result of her being set 61 times. She finished with 11 attacking errors and a .213 hitting percentage. Overall, CSU did well against the Broncos’ attack by holding them to a .209 hitting mark as a team.

The problem for the Rams was their inability to get their hits through the blocks of Boise State as their hitting clip was actually lower than the Broncos at .195, including a -.167 in the second set. BSU also bested the Rams in blocking, 14-13.

Redshirt freshman Breana Runnels had the most success with a team high 17 kills, but Hilbert and the team know that it will take a greater effort the second time around.

“We try to grow every day from the stand point of what we do offensively,” head coach Tom Hilbert said. “We flipped Paulina (Hougaard-Jensen) and Kirstie (Hillyer), we have really focused a lot on how we’re going to use our outside hitters in different ways. We still don’t pass the ball very well, we’re trying to improve as a passing team, we’re trying to make it so other teams can’t target Sanja (Cizmic) as much.”

Senior Sanja Cizmic has been the victim of more defensive pressure as she has only one double digit kill match in the past six the Rams have played (11 at New Mexico). The Croatia native hit a low against San Jose State when she had only one kill and a .-182 hitting mark. Cizmic is still excited about how well the team has played thus far and is eager to see what they can do when it is tournament time.

“Everyone is really dialed in to postseason and we don’t have people that are slacking or don’t want to work on this stuff,” Cizmic said. “That’s really exciting, especially because it’s my senior year like you always want to end up good.”

Heading into conference play, BSU and CSU looked like the two teams who would compete for the Mountain West crown. CSU was picked to win the conference in the preseason with the Broncos close behind in second. However, after the Rams’ victory that put the Broncos at 4-1 in conference, Boise State went into a tailspin.

They lost their next four matches to drop out of contention as CSU continued to win and moved to 9-0 at that point. The rest of the conference has beat up on themselves with many teams having four, five or six losses. All the hype around winning the conference is exciting for the team, but Hilbert does not enjoy all of the talk.

“I hate even talking about it,” Hilbert said when asked about his team potentially clinching. “Should we clinch it early, we are still going to wait until the end of the season to celebrate it.”

For Utah State, the Rams dominated them like they have most conference opponents by sweeping them in Logan, Utah in early October. The Aggies hit a .174 mark while CSU was almost double that at .306. The Rams also stunted the Aggies at the net with a season-high 16 blocks.

The quest to finish the Mountain West race begins Thursday with the matchup against Utah State starting at 7 p.m.. If CSU defats USU, then the match against Boise State at 1 p.m. on Saturday could be the title-clincher and the mark of a 23rd consecutive postseason appearance.