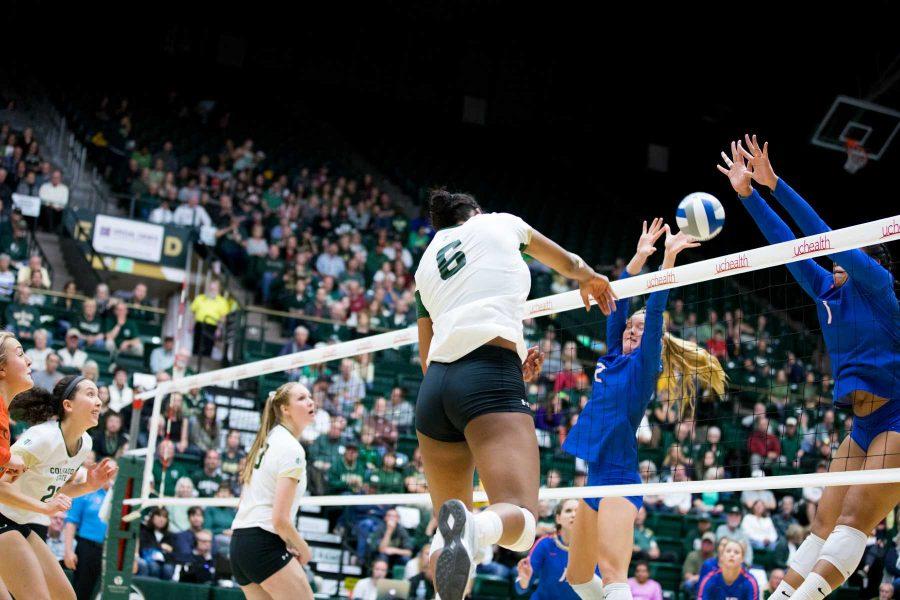 No. 20 Colorado State volleyball swung their way to a sweep over conference rival Boise State and clinched the Mountain West Conference title with multiple weeks left in the season (27-25, 25-13, 25-22).

In a match that treated the populous of Moby Arena to three very different sets, the Rams were able to take each set, regardless of the obstacle.

After a season in which the Rams yielded the conference championship to Boise State, revenge was on the mind of the senior-led Rams and they came through in front of a raucous Moby Arena. Going out with a Mountain West title was a focus from the end of last year and the team took a renewed vigor into the offseason.

“We’ve come into conference and treated everybody the same,” Jasmine Hanna said. “We’re playing somebody big every night and we’re not overlooking anybody because the conference is so tight. Any night, anybody can beat you.”

The defending champions came out slow early but the Broncos came back in a hurry late with a 6-0 run to eventually bring the score even at 24. Led by Kirstie Hillyer, the Rams held off the Broncos, taking the set on a Hillyer block. Despite being picked to finish second in the pre-season, the Broncos have had a letdown this season, now at 6-8 in the conference. After taking the Rams to a fifth set in their first meeting, the Broncos were unable to pose much of a threat on the road.

A reversal from the first set, the Rams got out to another double-digit lead but never took their foot off the throttle taking the set by double digits. In a set that featured a .417 hitting percentage by the Rams and a reduction of service errors from four to two, the Broncos were held to a lowly -.088 hitting percentage, their lowest in a set this year.

A catalyst for the Rams’ domination was their .366 hitting mark in the match, a far cry from the usual percentage allowed by the Broncos which before the match sat below .200 on the year. In another juxtaposition from the first of their two meetings, the Rams held Boise State to a .125 hitting percentage, a key element to the sweep.

“We prepared really well,” Paulina Hougaard-Jensen said. “Our scout team was really good and we were talking a lot about serving and blocking today, knowing if we served to a certain player we could back off (other players).”

With leads that reached double digits in two out of three sets, the Rams were front running for much of the match, riding a wave of momentum created early. In a season full of leading, the Rams were able to handle Boise State with ease, despite senior Alexandra Poletto being in street clothes for the match. Hougaard-Jensen once again filled in admirably for the injured Poletto.

Given the roller coaster of injuries the Rams have dealt with this year, the leadership and top flight play of senior Hanna has been a constant force for their success. Hanna once again led the Rams with 13 kills to add to her Colorado State all-time record in the modern scoring era. Each kill distances the already elusive record and adds to Hanna’s legacy as one of the best hitters in school history.

“(The seniors) really wanted to win (the Mountain West),” Hanna said. “It’s our last time playing Boise and I think we still have that memory of losing last year so it’s important to win all of these matches.”

In the final and clinching set, the Rams flexed their comeback muscles after trailing early. After consecutive sets of hitting over .400, their percentage dropped to .281 in the concluding set, but were picked up by their defense, limiting the Broncos to .143.

After an early conclusion to the Mountain West title race, the Rams have secured a spot in the national tournament and will begin their preparation for the tournament against conference foe Nevada on the road Thursday evening.

“We now need to look beyond,” coach Tom Hilbert said. “Every match we play from this point on and every practice that we have is preparing us for the postseason. We’re still gonna prepare for our Mountain West opponents, but we’re going to step things up intensity and competitive wise in practice.”

The Rams have three of their final five matches on the road before concluding the year at home Nov. 25 against the University of California, Davis. An RPI boost in the remainder of the season would allow the Rams to host, though the lackluster season by Boise State will hurt the Rams, despite their season sweep of the Broncos.