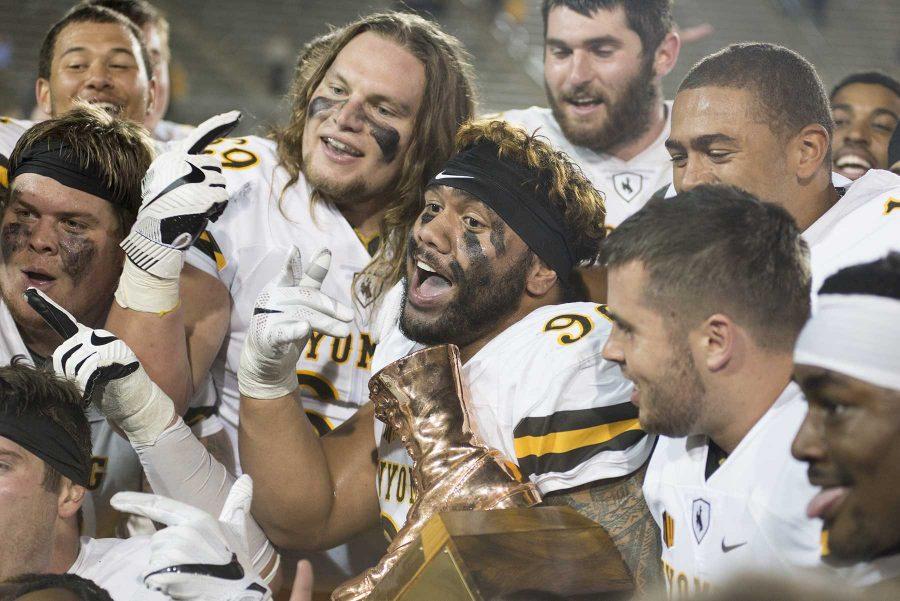 Colorado State football will face its oldest rival on Saturday when the Rams travel to Laramie, Wyoming for the 107th installment of the annual Border War.

Having faced each other in every season since 1946, the CSU-Wyoming rivalry is the longest continuous series west of the Mississippi River.

Dating back to 1899, CSU owns a record of 57-45-5 against their rivals to the north. However, the Cowboys hold a slight 25-24 advantage since the Bronze Boot was introduced as the official traveling trophy in 1968. After losing 38-17 in Fort Collins last season, the Rams will look to bring the Bronze Boot back south of the Wyoming border line in 2017.

“In my time here, there seems to be a more passionate fanbase on both sides of (the rivalry) when you talk about this game,” head coach Mike Bobo said.

Bobo explained that obviously the goal is win every single game but when it comes to rivalry matchups with teams like Air Force, Colorado and Wyoming, the stakes are naturally raised a little bit.

“There is so much tradition with this game,” Bobo said. “I’ve heard so many stories of great plays and things that have happened here in Fort Collins or in Laramie. Games where there were missed opportunities and it still hurts them to this day because Wyoming beat them on this night or this day.”

With so much history between these two programs, Bobo knows what is at stake this Saturday. Winning the Border War is not just about the players on the field. It is about playing for this community, this university and everyone that has ever suited up for the green and gold.

“We talk about it all the time, we don’t just play for us,” Bobo said. “When you add the tradition and the history of this game, it’s that much more important.”

Along with the excitement of facing one of their biggest rivals, Saturday’s matchup with Wyoming will be one of the most important conference games of the season. With each team coming into the game with one conference loss, whoever is defeated this weekend will likely no longer be in contention for the Mountain West Championship.

If the Rams are going to have any chance of defeating the Cowboys in their own house Saturday and keeping those title dreams alive, slowing down Wyoming’s quarterback Josh Allen is going to be crucial.

After giving up 45 points and 477 yards of total offense against Air Force last week, Allen will once again be a big test for the Rams’ defense. Senior defensive end Jakob Buys embraces the challenge and is hoping to help get the unit back on track.

“Honestly we were riding too high,” Buys explained Wednesday. “We were winning these close games but they should not have been that close… If we want to be the most dominant Mountain West team, we can’t let that happen.”

The 2017 edition of the Border War will kickoff at 5 p.m. on Nov. 4 in War Memorial Stadium. The matchup with the Pokes will be nationally televised on CBS Sports Network and can be listened to locally on the radio on FM 102.9.