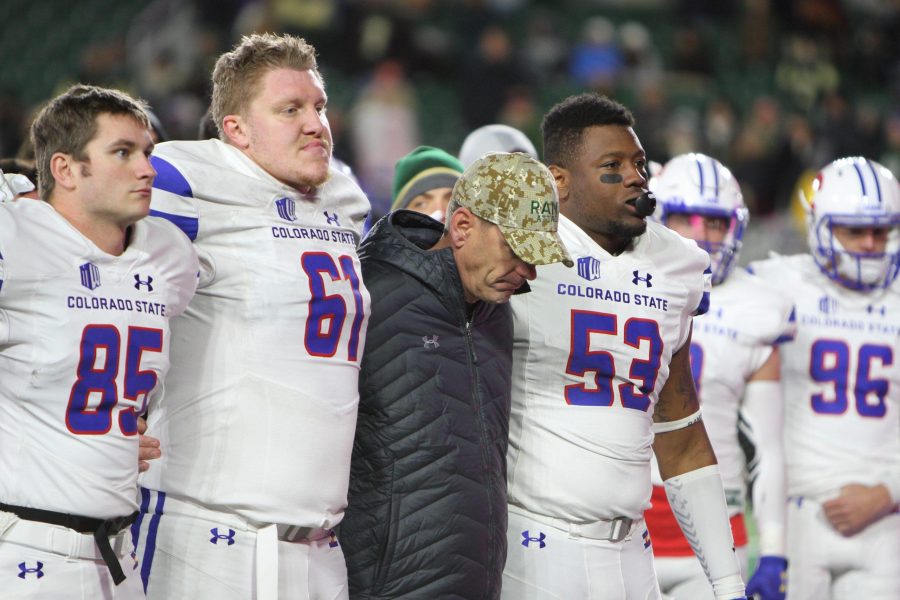 Mike Bobo sways with the CSU football team following the loss to Boise State on Nov. 11. (Tony Villalobos May | Collegian)

What looked like a promising Saturday in Fort Collins turned sour early Sunday morning for a Colorado State football team that surrendered a 25-point lead in a 59-52 overtime loss to Boise State.

The Rams cruised for most of the game, holding a 14-point lead with under four minutes to play. Led by junior quarterback Brett Rypien, though, Boise State clawed its way back in quick fashion. Rypien found wide receiver Sean Modster for a 13-yard score to cut the lead to seven. Following a perfectly executed onside kick, the Broncos regained possession with less than two minutes to go. Rypien hit tight end Jake Roh for his second score of the evening, tying the game at 52.

In overtime, the Broncos struck first on a four-yard rush from running back Alex Mattison. On the ensuing possession, CSU running back Rashaad Boddie fumbled the ball near the goal line as Boise State completed the seemingly improbable comeback, winning 59-52. The win marks Boise State’s biggest comeback in 33 years.

“There’s a million plays in my head right now that were opportunities to finish game, and we couldn’t finish,” head coach Mike Bobo said. “We can’t seem to find the ability to make that play to get us over that hump, and it’s disappointing. Not just players, coaches too, myself included.”

After back-to-back losses in rivalry games, the Rams came out firing on offense. Running back Dalyn Dawkins set the tone on just the second play of the game with a 39-yard rush to move into Broncos’ territory. Five plays later, Dawkins punched it in from 10 yards out to give CSU the early lead.

The Rams scored on their first five offensive possession of the contest to take a 35-17 lead into halftime.

“I felt really good about the start, I felt like we were moving the ball really, really well,” Stevens said. “We put up 52 points against a really good defense. I think you can attribute that to the fast start and execution. But at the end of the day, you didn’t make enough plays and you’ve got to live with that.”

After the break, though, it was a whole new ballgame. It took Boise State just two plays to cut into the 18-point lead. Running back Alex Mattison broke free for a 70-yard touchdown that changed the entire outlook of the game. A depleted Boise State team found life as the Broncos began their comeback.

On the next drive, CSU established its groove once again. Stevens connected with wide receiver Warren Jackson on a 32-yard pass to move inside the Broncos’ 20-yard line. Two plays later, the senior quarterback kept the ball on the read-option, juked one defender and scampered into the end zone for a 10-yard score.

The Broncos responded with a 10-play, 86-yard touchdown drive to trim the lead back to four. Early in the fourth quarter, CSU moved the ball down to Boise State’s 1-yard line before being stopped on third down. With a four-point lead, Bobo elected to take the field goal and seven-point lead.

“We had three downs to score before that and we didn’t score,” Bobo said. “You go up seven points and I thought that was the right decision…Hindsight is you knock it in there and go up 11, but we could have scored on the first three downs. We didn’t.”

Boddie added a touchdown late to give the Rams a 14-point lead, but it was not enough for the victory. For the second week in a row, the defense failed to maintain a late lead.

“It’s something that we’ve kind of got to look at in the film room the following day. Finishing has been a struggle for us, we’ve just got to figure it out, got to get over the hump.”Safety Jordan Fogal

Boise State running back Alex Mattison torched the Rams’ defense for 242 yards and three touchdowns on just 23 carries. The performance marked the third most rushing yards by a Bronco in school history.

Stevens finished the night 29-of-43 for 309 yards, throwing two touchdowns and one interception. Gallup once again served as his favorite target, registering 102 yards and one touchdown on 10 receptions. Gallup now has six 100-yard receiving games on the season.

With the loss, CSU is officially eliminated from Mountain West Championship consideration. CSU finishes up the regular season next Saturday at home against San Jose State. Kickoff is set for 1:30 p.m. at Sonny Lubick Field.