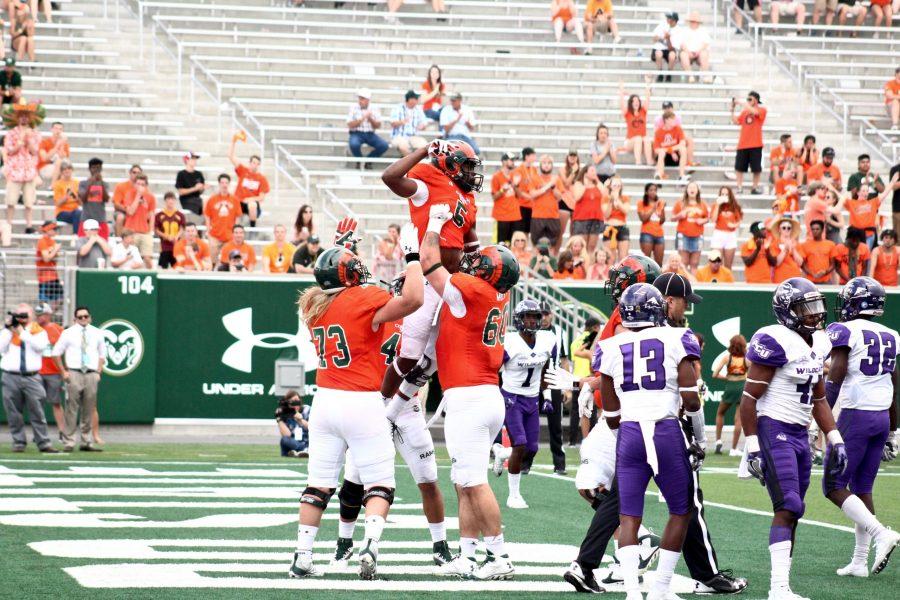 The Rams returned three linemen with experience in center Jake Bennett, tackle Zack Golditch and guard Trae Moxley. But they were also left without All-Mountain West guard Fred Zerblis and two starters in Nick Callender and Paul Thurston. All three seniors played significant roles on what was a dominant and versatile line in 2016.

Their departure left a massive hole in the Rams’ offense, one that was impossible for the returning linemen to ignore entering 2017.

Despite losing three veteran linemen, the offensive line has held its own so far this season. At the center of their success is Bennett, widely considered to be the glue of the front five. After earning second-team All-Mountain West honors as a junior last season, Bennett was selected to the first team this preseason. He has started CSU’s last 32 games, dating back to the first game of his sophomore season.

“Jake’s kind of the centerpiece of that line and the glue that holds them together,” head coach Mike Bobo said.

Moxley and Golditch also bring leadership to the offensive line. As fifth-year seniors, the two have started alongside Bennett in all six games this season and the trio have played numerous games together in the trenches over the years. With so much time spent together in offensive coordinator Will Friend’s system, chemistry between them continues to grow day-by-day.

“Me, Zack and Trae have been here for the last five years together,” Bennett said. “Not only that, we spend five hours a day together. I think no matter what, you are going to build some sort of chemistry off of that.”

Regardless of the success of CSU’s experienced offensive linemen, other Rams have been forced to step up to fill the line. Though there have been some growing pains, a few of the less experienced linemen have begun to establish themselves. Specifically, three former junior college players in Nicho Garcia, Ben Knox and Tyler Bjorklund have all experienced success on the line.

Garcia, who redshirted his first season in Fort Collins last year, has been a consistent starter at right guard. Knox has played in four games this season, starting two at right tackle. Though starting the season slower than others on the line, Bjorklund started the last two games at right tackle.

It can be extremely difficult to transition from junior college to Division I football. The way in which some of these less experienced linemen performed at the beginning of the season makes that apparent. However, their weekly improvement has made CSU’s offensive line a much stronger unit. When comparing the offensive line’s performance in week 1 against Oregon State to last week against Utah State, that massive improvement is apparent.

“We have a few JuCo (junior college) guys in there that are still getting used to the system a little bit,” junior running back Izzy Matthews said “You can tell just how exponentially better they are getting week-to-week. I mean, these guys are just making incredible strides. From week 1, we got guards pulling the wrong way, stepping the wrong way. To every single person on the same page right now.”

The offensive line becoming more solidified as the season has progressed shows in the stats, too. One of the line’s biggest strengths thus far has been protecting quarterback Nick Stevens from getting sacked. In fact, the offensive line has only allowed an average of 0.33 sacks per game, the fourth best mark in the FBS. Stevens has not been sacked in five of the Rams’ six games played this season.

The line has been instrumental in the offense’s scorching play to begin the season. Through six games, the Rams rank fourth in the FBS in total yardage (3,037) and 14th in yards per game (506). A large part of that has been the team’s efficiency on third down, something Stevens credits the line for. At 54.7 percent, only two teams in the FBS have converted third downs at a higher rate than the Rams.

Within their fast start offensively, the Rams have seen success running the ball. CSU has already scored 10 touchdowns on the ground and have gone over 100 more rushing yards as a team in all six games this season. A large reason the rushing game has seen such consistent success is due to the work of the big uglies up front.

The offensive line has consistently created ideal holes for the Rams’ running backs to burst through. In turn, they have been able to gain plenty of yardage before first contact, a dream for any running back.

“I would say that this year more than any has been the kind of year where on the plays that are executed well for the backs, the backs aren’t getting touched until we are four or five yards down the field,” Matthews said. “This opens up the run game tremendously. You’re seeing (Dalyn) Dawkins in there getting a 13-yard run and 20-yard run right after the other. Just the strides they’ve (offensive line) made has been incredible.”

Despite a mix of experienced players and some players who had not started a game until this season, CSU’s line continues to mesh and find its identity each game. Still, there are plenty of areas for the unit to improve upon. This offensive line is far from a finished product and is miles away from what Bobo hopes it will be by the end of the season.

Though they have limited sacks, the offensive front has allowed Stevens to be hit far too frequently. This presents a risk to Stevens’ health and his ability to deliver accurate passes to receivers.

“We’ve let up way too many pressures and way too many hits,” Moxley said. “For us, the thing that kind of annoys us more than allowing a sack is the pressures because we have consistently let him get hit. So we have to clean that up.”

This unit has been growing and working through kinks all season long. Though they have improved each week, there is no reason why the offensive line cannot eliminate their flaws. Bobo believes continuous hard work and more repetition for the inexperienced linemen is the key for success during the thick of Mountain West play.

“The more reps they get, the better we’ll become as a unit,” Bobo said. “We are still not there as a unit by any means. But we are a tough group. They play hard, and if they do that week in and week out we have a chance. We’ll keep coaching them on the finer things of playing as a unit, of playing together. If we keep doing that and keep our toughness and stay healthy, we have a chance to be a really good offensive line.”