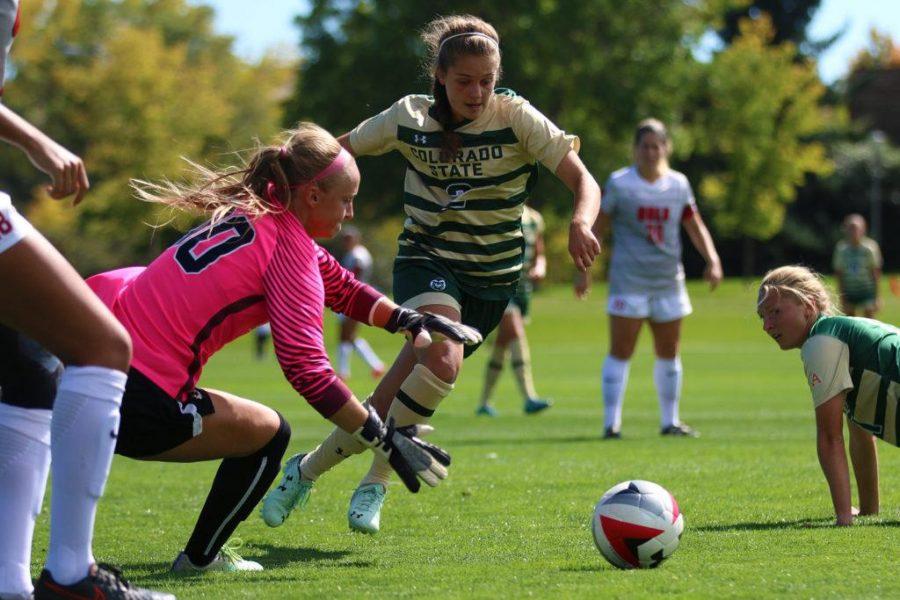 CSU Freshman Alex Lanning (2) beats UNLV Goalkeeper Jordan Sallee to the ball but can not put the ball in the net. (Elliott Jerge | Collegian)

With a critical three points up for grabs in the Mountain West standings, the San Diego State Aztecs shutout the Colorado State women’s soccer team 3-0 on Sunday afternoon at the SDSU Sports Deck.

The Rams needed to win their last two matches to stay in contention for their first Mountain West Championship berth. However, they were unable to generate any momentum versus Mia Root and the red-hot Aztec offense under the sweltering San Diego sun.

Since dropping their Oct. 13 match at Colorado College, the Aztecs have won three straight, outscoring the opposition 9-1 over that stretch. Root has been at the forefront of the Aztec offense all season and posed the biggest threat against the Rams on Sunday.

The freshman forward nearly opened the scoring in the 10th minute with a curling strike from thirty yards out. The shot would have been trouble for CSU goalie Hunter Peifer, but the far post deflected the attempt out of harm’s way.

In the 18th minute, Peifer reached to make a brilliant save on Chloe Frisch, but the ensuing corner kick produced another golden opportunity for Root. This time from the top of the penalty area, Root collected a failed CSU clearing attempt and drove a ground ball to the near corner of the goal and past Peifer’s diving reach.

The Rams looked for a quick equalizer and successfully drew a corner kick moments after the initial goal. Makenzi Taylor found Kaija Ornes with the set piece, but Ornes pushed the shot wide of the net. Although missing scoring opportunities is never ideal, Ornes’ miss was especially troubling for the Rams because SDSU added to their lead minutes later.

From a corner kick, the Aztecs worked the ball to Root for a header, but a heads-up play by Alex Lanning on the near post kept the shot from crossing the goal line. The Rams weren’t able to switch fields, though, and Aliyah Utush had enough space on the end line to hit Root in front of the net for a tap-in goal.

Down by two scores, the Rams were finally able to put some pressure on the SDSU backline before entering the half. CSU drew a free kick from 30 yards out and called on Beth Plentl to deliver the set piece. From Plentl, Emma Shinsky volleyed a pass to Hannah Gerdin for a header, but Gerdin’s shot struck the top of the post.

“(We) weren’t able to hold onto the ball much,” CSU head coach Bill Hempen said in a statement. “When we did have it, we tried to make the killer pass, but just couldn’t, and not for a lack of effort. It just wasn’t to be today.”

The Rams tilted the pitch towards the SDSU net for the first five minutes of the second half, but their momentum was short lived as the Aztecs only needed one shot to take back control of the game.

From deep in her own zone, Dani DeRosa found Utush streaking down the left hand side of the pitch with a towering through ball. Utush beat the CSU defenders to the end line and connected with Angela Mitchell for another tap-in tally.

Although Peifer had no chance of stopping Mitchell’s shot, senior Paige Brandt replaced the redshirt sophomore keeper in the 60th minute.

“We fought and gave up three goals, three good goals,” Hempen said. “In some cases they could have been preventable; they weren’t goalkeeper error.”

Brandt joined every Ram senior, besides the injured Maddi Rodriguez, in playing Sunday’s penultimate game of the season.

Senior Taylor Hodgson nearly broke the shutout in the 81st minute when SDSU goalie Kate Hart bobbled her free kick. However, no Rams were in the area to put the shot away. The game ended 3-0, yet Hempen is not overlooking his team’s ability, given their limited opportunities on Sunday.

“Certainly, we are a good enough team, but we were chasing the game and weren’t able to hold onto the ball much,” Hempen said.

The Rams return to the CSU Soccer Field for their final game of the season versus Wyoming on Friday at 1 p.m.