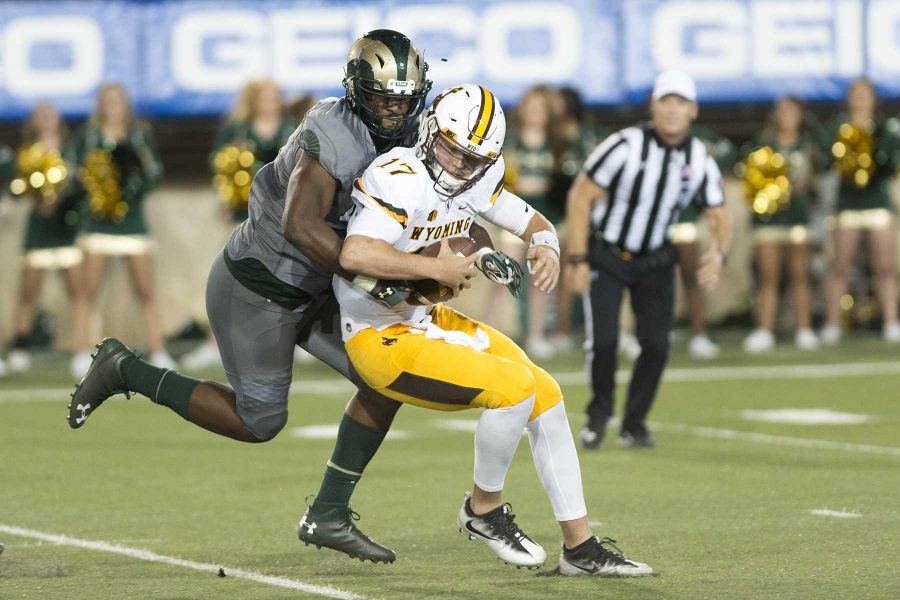 When Colorado State travels to Laramie, Wyo. for the Border War Saturday, all eyes will be on polarizing quarterback Josh Allen.

The junior came into the season as a surefire first-round pick in the 2018 NFL Draft. Some analysts even pegged the talented, unproven quarterback as the first overall selection.

Through eight games of the season, though, Allen has yet to unleash the potential that has so many NFL scouts drooling. Allen is completing just over 50 percent of his passes on the season, racking up 1,450 yards, 12 touchdowns and six interceptions. He has also added four more scores on the ground.

Regardless of his play in 2017, CSU head coach Mike Bobo recognizes the superb physical attributes Allen possess. And when they are on display, he has game-changing abilities.

“I can’t say enough about (Allen), he makes them go,” Bobo said. “He is about impossible to tackle. He makes plays after plays with his legs and his arm…Countless times over the last two years, this guy has made plays to win ballgames. Truly, truly impressive kid.”

Possibly more than anything else, Allen’s arm strength presents the biggest challenge for opposing defenses. His ability to make strong, accurate throws on the run had Bobo awestruck. It’s not as if he just dumps the ball off in the flat, either. Allen routinely completes 40-yard strikes across his body, leaving defensive coordinators scratching their heads.

Bobo, a father of three daughters and two sons, knows a physical mismatch when he sees one.

“He throws people down like they’re my little son, Jake. Like we’re playing in the backyard,” Bobo said. “It’s like a big boy playing with little kids out there.”

Despite the raw athletic talent, Allen’s mediocre statistics have many retracting their former praises for the young quarterback and replacing them with doubts. However, Bobo believes this has only sharpened Allen’s mental toughness.

From a potential first-overall pick to someone who doesn’t look like the best quarterback in their conference, Allen has competed with the same ferocity.

“His toughness impresses me. They lost some pieces around him, and a lot’s on this kid’s shoulders,” Bobo said. “And he keeps coming out every series with the moxie and the confidence that ‘I’m gonna put this team on my back offensively.’”

Coming off his best performance of the season in which he tied a career-high for total touchdowns (five), that confidence is likely to be soaring come Saturday. Still, Bobo and the Rams know what it takes to slow him down.

One week after failing to slow down Air Force, CSU will try to contain the talented Allen-led offense. Kickoff is set for 5 p.m. Saturday at War Memorial Stadium.