Michael: With bright future ahead, CSU would be wise to lock down Mike Bobo 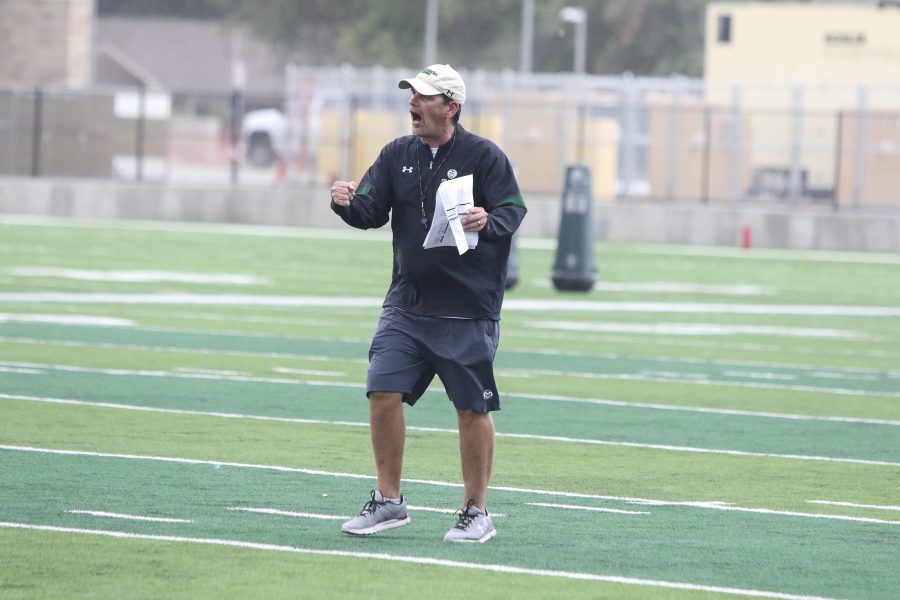 Head Coach Mike Bobo shows some intensity and emotion during one of the CSU Football drills on August 1st at the new CSU stadium practice field. (Javon Harris | Collegian)

Colorado State football (4-2) moved to 2-0 in conference play for the first time since 2005 with last Saturday’s victory over Utah State.

The win over the Aggies was momentous for a variety of reasons, but none more than keeping the season-long goal of winning a Mountain West championship alive. Saturday’s victory was also extremely telling of where the program currently sits and what the expectations for this season are within the locker room.

While Ram fans have long heard promises of Mountain West championships to come, no new banners have been raised since the 2002 season. Naturally, there has been room for skepticism in the past.

Even in successful seasons, such as the 2014 campaign when CSU finished the season 10-2 and ultimately reached the Las Vegas Bowl, an early conference loss at Boise State made competing for a conference championship extremely difficult.

Through the first six games of the 2017 season, it is obvious that this football team understands they cannot afford to take any opponents lightly and that a single loss in conference play will really handicap this team’s ultimate potential.

The players deserve much credit for this mindset. Going back to spring ball, it was obvious that this team had a different vibe than in years past. Both on and off the field, it was clear that this team was focused and primed to make a run at a conference title.

The coaching staff also deserves high praise, especially head coach Mike Bobo. Now in his third season with the program, Bobo has CSU football competing at a high level on a weekly basis. Had the team not been jobbed by the officials in week 2, the Rams very well could be 5-1, with the lone loss coming to No. 1 Alabama.

“I’m proud of our team because we are getting better. We’re taking nothing for granted. Each game is a championship football game,” Bobo said.

Six conference games remain in the regular season so there is still much to accomplish. But if this team continues to perform as they did in the first half of the season, the Rams will very likely be favorites in all of those games, four of which will be in Fort Collins.

Realistically this is the best chance CSU has had to secure a spot in the MW Championship in quite some time, so the next two months will be very exciting for the faithful Ram fans. Even if the team falls short, with a brand new stadium, a stacked young roster and future recruiting class, the future of the program is bright.

This is why it would be wise to lock down Bobo with a contract extension right now. With how much potential this football program has to make noise on a national level over the next few seasons, failing to secure the leader of the ship would be a huge mistake.

Having watched Jim McElwain bolt for Florida and countless other Group of Five coaches poached by bigger programs over the years, CSU knows exactly how deflating it can be for a program to lose its leader at the first sign of sustained success.

While I am not sure CSU will ever be able to protect itself against a football powerhouse from one of the nation’s elite conferences, giving Bobo a nice new deal would at least give the Rams some form of security against other job offers.

Bobo is currently the highest paid coach in the MW with a base salary of $1.55 million. The salary is based on his original 2015 deal when the coach signed a five-year contract, starting at $1.35 million and increasing by $100 thousand each season through the end of 2019.

Bobo’s contract also includes a variety of incentives including bonuses for stellar academic performance or success on the field. What should be concerning to Ram fans is the details of his buyout clause.

If I were President Tony Frank and Athletic Director Joe Parker, I would lock Bobo down with a sweet new deal now and avoid the heartache of losing another head coach in the future.