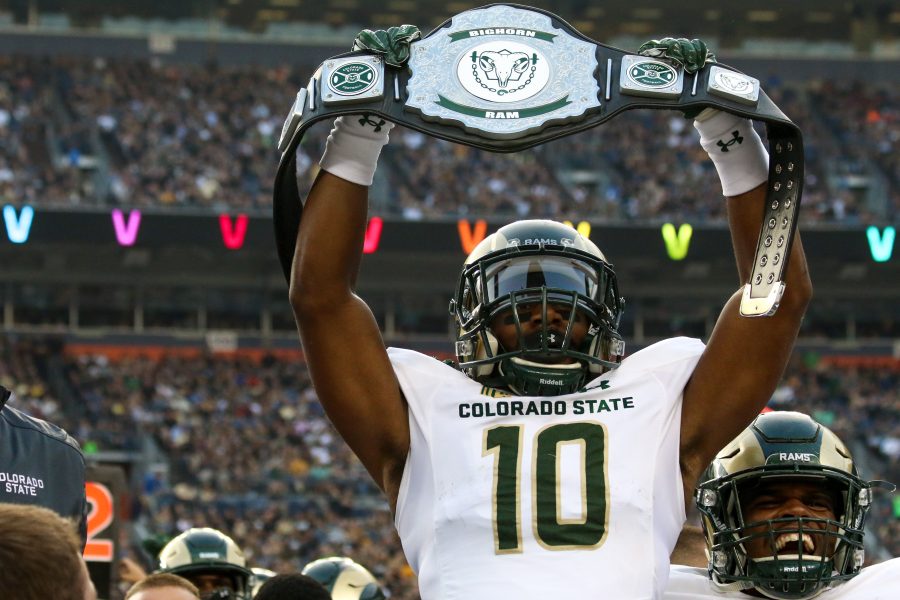 Cornerback Kevin Nutt Jr. holds the "Bighorn Ram" belt after making a big defensive stop at the Rocky Mountain Showdown on Sept. 1, 2016. The belt is passed off between players who make big plays during the game. (Jack Starkebaum | Collegian)

A player’s talent on the field can only take them so far. If mental demons linger in the background, they will find a way to inhibit success on the field.

Colorado State senior cornerback Kevin Nutt Jr. learned this the hard way. But Nutt’s performance this season makes it apparent there are no longer any mental factors stopping him from excelling.

Nutt gathered plenty of accolades upon graduating from Edison High School in Fresno, Calif. in 2014. The future CSU defender served as the captain of Edison’s football team as a senior and was a first-team All-County running back as a junior in 2012.

His speed and athleticism extended to more than just football, though. Nutt played basketball, baseball and ran track at Edison. Nutt was also part of a 400-meter relay team that brought home a California state title in 2014. Coming out of high school, Nutt held football offers from Houston, Boise State, Fresno State, Eastern Washington and San Jose State in addition to CSU.

Though the cornerback recorded 12 tackles as a true freshman in 2014, Nutt’s primary role in his first two seasons was on special teams. In 2015, Nutt gained 187 yards on six kick returns, including a touchdown.

It wasn’t until the following season that Nutt finally settled into his role as a cornerback. Last season, Nutt recorded 29 tackles. Though it was a major improvement on his combined 16 tackles in the previous two seasons, Nutt had yet to unleash his full potential. Still, starting 11 games on defense was invaluable in his development heading into his senior campaign.

“All that repetition of being on the field and getting used to playing in live game action really helped me grow as a player,” Nutt said. “It allowed me to be more loose and confident when I’m on the field. Practicing hard and creating those good habits in practice was leading me to perform better.”

While Nutt’s 2016 campaign can be considered a success compared to his first two years, what he has done this season shows that last season was only the beginning.

Nutt has already recorded 27 tackles through the Rams’ first six games this season, only two less than his 2016 total and good for second most on the team. The cornerback leads CSU in turnovers with three, and his two interceptions are tied for the team lead. In addition, Nutt has matched his career-high of five tackles in a game on four occasions this season.

Though physical improvements should not be overlooked, the main factor contributing to Nutt’s breakout season is handling his mental weaknesses.

“In the past few years, when I did something wrong I would get down on myself and I would allow that to lead me to consistent bad plays,” Nutt said. “With the new mindset I’ve had, every time I have a bad play I kind of use that as motivation to do good on the next play. I put it behind me, correct what I did wrong, and use it to help me perform better the next time around.”

Conquering these mental demons is no easy task. It’s not as if the cornerback woke up one day and everything was solved. It could be a new level of maturity that allowed Nutt to get over the hump. Maybe Nutt didn’t even recognize the flaws of his mindset when he was an underclassman. Regardless, coaching is one of the leading factors to Nutt’s improved mental toughness.

“You saw the talent there, but it was more upstairs with Kevin,” head coach Mike Bobo said. “He would get emotional about every little mistake that he made and it would affect his play. I think he finally started taking coaching and working on the things that can improve and eliminate some of those mistakes. And he started performing better because of him taking coaching and letting his athletic ability shine. He’s become more of a competitor.”

In addition to Bobo’s coaching, cornerbacks coach Terry Fair has been instrumental in promoting this shift in attitude. Fair has a particular level of insight and experience that not all cornerback coaches possess. As a former first-round pick in the NFL Draft, Fair possess plenty of knowledge and wisdom to pass onto his players.

More importantly, Nutt is making the most of it.

“He’s a guy that, when you walk around the corner, he’s sitting in coach Fair’s office,” Bobo said. “Meeting with him extra, talking about the little things that is going to help him play better and help us play better defensively.”

Nutt gives credit where credit is due. The senior recognizes that Fair’s coaching has benefited him immensely.

“He (Fair) knows what it takes to be the best,” Nutt said “He always stresses that you have to hone in on your technique because that’s what’s really going to take you far. It’s not really about your athletic ability, it’s about if you can keep your technique consistent and good. That’s what’s going to get you over the hump.”

Through six games of the season, the Rams are surrendering six fewer points per game than last year. Much of this success can be attributed to their red zone defense.  CSU has only allowed opposing teams in the red zone eight times this season, which is tied for the least in the FBS. What’s more, opponents have only scored on 62.5 percent of those opportunities, a mark that is seventh best in the FBS.

The ability to stop opposing teams from scoring many points this season has resulted in a high level of confidence for CSU’s defensive unit as a whole. Nutt builds off his teammates’ energy and uses it as motivation on the field.

“Every time I see one of my defensive backs make a play, I get so excited,” Nutt said. “They make me want to go out there and do the same thing. I use it as a confidence booster. That’s how we all do it. We make it a competition. Who can make the most turnovers, who can make the most plays. That’s the mindset that we go out there every single game. Even in practice, who can be the best of the day.”

Nutt has already set career-highs in interceptions, fumble recoveries and turnovers. It’s only a matter of time before he breaks his career-best in tackles during what is already a career-year for the senior cornerback.

After bursting through his prior mental barriers, Nutt has finally unleashed his full potential as an impact defender, hungry for a Mountain West championship.