Herz: CSU’s defense is trending in the wrong direction 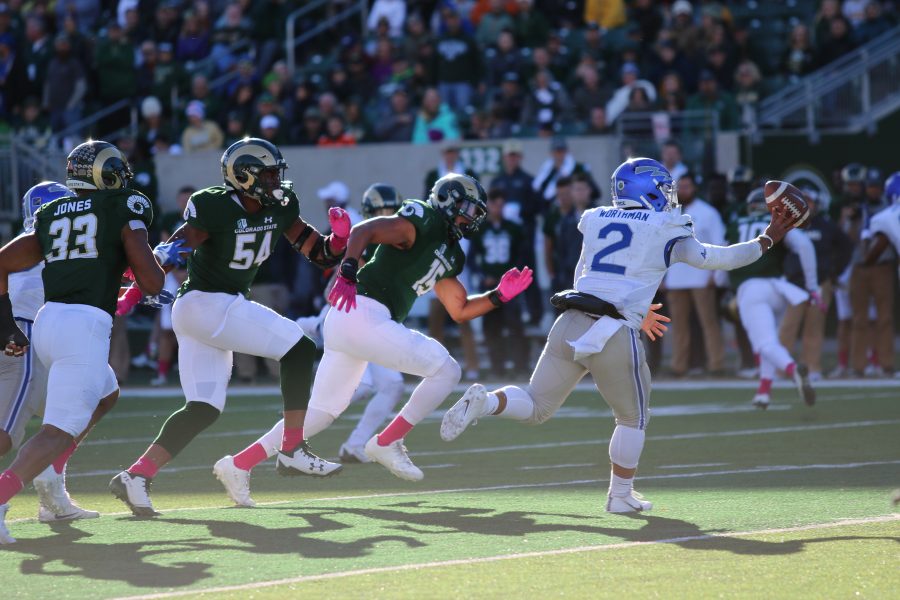 The Colorado State defense looks to tackle the Air Force Falcons quarterback as he throws the ball away. (Jack Starkebaum | Collegian)

Luckily for Colorado State, the triple option portion of the schedule has concluded this season. Considering how the defense performed against New Mexico and Air Force, the Rams should honestly feel fortunate that they won one of the two games, despite how they were heavily favored in both.

In last week’s narrow 27-24 victory over the Lobos, CSU’s defense had fits handling New Mexico’s run option offense. The Lobos rushed for 318 yards in the game and executed head coach Bob Davie’s offense quite well. At the time, this was the most yards on the ground the Rams have allowed in a single game this season.  Air Force didn’t let that last long though.

The Falcons ran for 413 yards, scored four touchdowns on the ground, and averaged 5.6 yards per carry over their 74 total rush attempts Saturday. Similar to when they played New Mexico,  the Rams’ defense was absolutely dominated at the line of scrimmage. Frankly, CSU’s defense arguably only put together one good play in the game, which was Anthony Hawkins’ first half interception.

I get it, the triple option can be tricky. But you’d think the Rams would be more prepared to face it this week after playing a team who also uses it last week. I guess not. Air Force essentially did everything they wanted on offense. It seemed the only times they weren’t putting together a successful play were the two portions of the game in which the Falcons kneeled the ball.

Air Force didn’t punt once in the contest. And within their 74 rushes, every single one was for a positive gain. You heard that right, the Rams had zero tackles for loss in the game. That is flat out embarrassing.

“The thing to me that was disappointing is we did not knock them back,” head coach Mike Bobo said. “They were finishing runs…We had a chance to get some guys on the ground to hopefully get ahead of the chains and they were able to finish runs for extra two, extra four, extra six yards.”

Of course, not having Jamal Hicks in the defensive backfield hurts. But Hicks playing wouldn’t have made this defense look that much better.

The defense was faulty in all aspects, from the line, to the linebackers, to the secondary. I wasn’t expecting CSU to shut down the Falcons’ offense entirely, as Air Force came in averaging 341.4 rush yards per game and statistically have the fifth best run-game in the FBS.

However, it’s unacceptable that Air Force’s offense got absolutely everything they wanted and undoubtedly controlled the tempo of the game. Sure, they have a great rushing attack, but they were 3-4 going into the game for a reason. They are beatable and the Rams had honestly been a better team than Air Force in 2017.  That’s why they entered as 11.5 point favorites. However, it didn’t look like that today.

“We could not stop them defensively,” Bobo said. “They basically did whatever they wanted: fullback, quarterback, the perimeter game.”

You could say that, well, the Rams just couldn’t figure out the triple-option and they don’t play any more teams who run that style of offense, problem solved. However, from the opening weeks of the season, CSU’s defense has been trending in the wrong direction overall.

The problem extends to more than just not being able to handle the triple option. Overall, CSU’s defense has been shaky this season, with the exception of two or three games, and it seems to be getting shakier. The bottom line is that if the Rams can’t begin to improve and figure things out defensively, they might be in trouble in their upcoming games against Wyoming and Boise State.

Yes, the Rams lost their first conference game in a disappointing manner today. But they are still very much in the hunt for a Mountain West championship. If they want to bring home the conference title, they need to find more balance as a unit.

The Rams’ defense needs to get their swagger back, it’s as simple as that.

Collegian sports reporter Eddie Herz can be reached by email at sports@collegian.com or Twitter @Eddie_Herz.