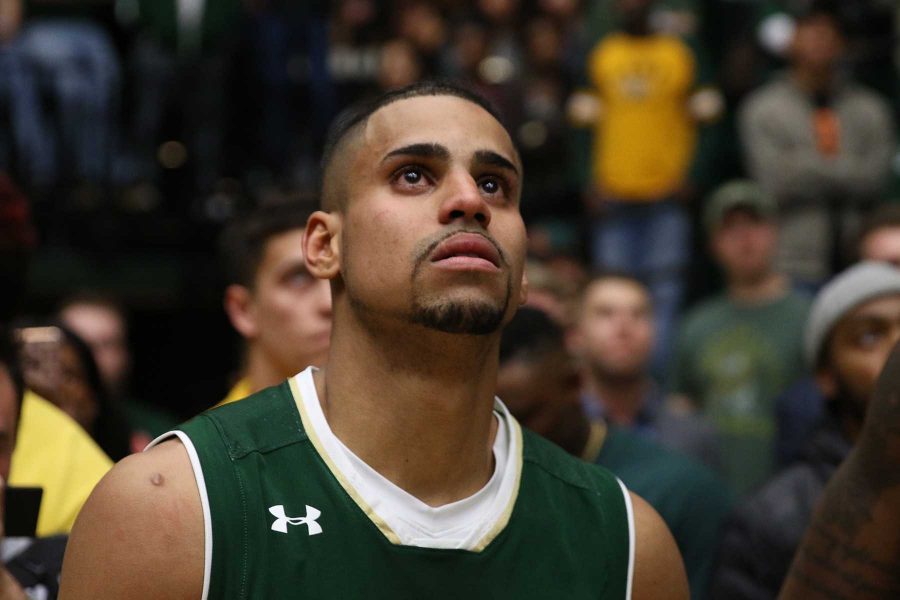 CSU Senior Gian Clavell stands and watches his video on the jumbotron before being honored at Senior Night on February 28. (Elliott Jerge | Collegian)

Former Colorado State guard and 2017 Mountain West Player of the Year Gian Clavell is officially a member of the Dallas Mavericks organization. The team announced that they exercised the option to convert his initial deal to a two-way contract on Tuesday. The former CSU standout agreed to the deal after being one of the team’s breakout players during the NBA preseason.

In five games with the Mavs, the Puerto Rico native averaged eight points, three rebounds, one steal and one assist per-game. Clavell shot particularly well from beyond the arch, finishing the preseason with a 3-point shooting percentage of 39 percent.

Prior to playing with Dallas in the preseason, Clavell played for the Miami Heat in a pair of NBA summer leagues. In ten total games with the Heat, Clavell averaged nine points, three rebounds and shot 37 percent from the field in 23 minutes per-contest.

While at Colorado State, Clavell was one of the league’s most prolific scorers. In 70 career games with Rams, Clavell averaged 15 points per-game. In his final two seasons at CSU, Clavell played an average of 37 minutes per-game and improved in nearly every major statistical category.

The 2017-18 season will be the first time that the NBA will use two-way contracts. According to league rules, teams will be permitted no more than two players under two-way contracts.  These players will spend the majority of the season in the NBA G League and cannot spend more than 45 days with their NBA team. Only players with less than four years of NBA experience are eligible for a two-way contract.

The Dallas Mavericks are currently affiliated with the Texas Legends, an NBA G League team based out of Frisco, Texas. Former CSU forward J.J. Avila is currently on the Legends roster. Avila averaged 17 points and seven rebounds per-game while at CSU from 2013-2015.