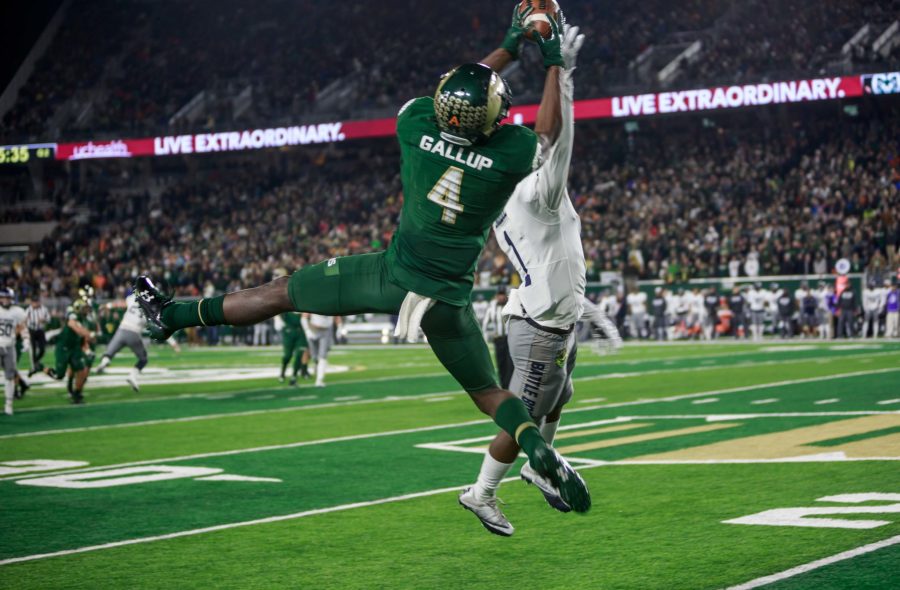 Senior wide receiver Michael Gallup brings in the reception over a Nevada defensive back during the 2017 homecoming game. (Davis Bonner | Collegian)

Following the best statistical performance of his collegiate career, Colorado State wide receiver Michael Gallup has been named the Mountain West Offensive Player of the Week.

Gallup led the Rams to a victory over Nevada with 13 receptions for 263 yards and three touchdowns. In doing so, he set a new career-high in receiving yards and tied his previous best in receptions and touchdowns.

The senior wide receiver now leads the NCAA in receiving yards (948) and ranks as the NCAA’s active leader in yards per game (110 over 20 career games).

In addition to his recognition from the Mountain West, Gallup has earned national praise from Pro Football Focus. On the site’s scale of 0-100, Gallup earned a 99.4 rating. This marked the best grade for any college player in the nation last weekend.

Through seven weeks of the season, PFF rates Gallup as the best wide receiver in the nation. His grade of 93.1 ranks three points ahead of the second place receiver.

The performance marked the fourth time Gallup has eclipsed 100 receiving yards in a game this season, two of which have gone for more than 200 yards. In his career, he has three 200-yard outings and is the only Ram to have more than one.

Gallup is the first CSU recipient of the MW Offensive Player of the Week since Nick Stevens won the award on Sept. 7, 2015.