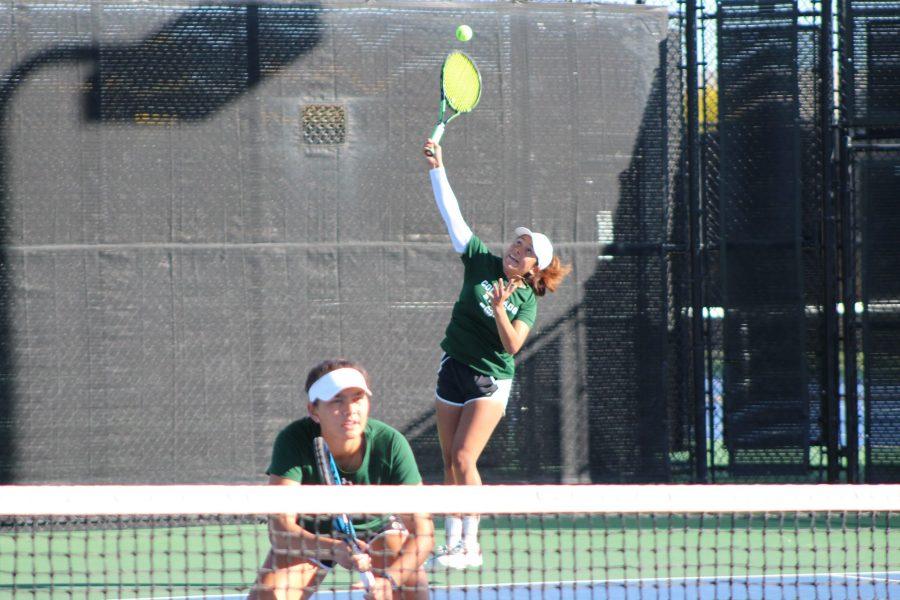 When the second annual Invitational came to an end Sunday afternoon, the Rams secured three doubles wins and a plethora of individual victories.

Freshman Emily Luetschwager and junior Emily Kolbow began the tournament with a doubles victory on Friday over Northern Colorado, 7-5. Success continued for the Rams in the individual portion of the day as six players won their individual match. Leutschwager, Kolbow, sophomores Solene Crawley and Alyssa Grijalva and freshmen Priscilla Palermo and Emma Corwin all won their individual match to begin the three-day tournament on a high note.

Saturday, Palermo and Grijalva teamed up to defeat Iowa State, 6-3. Another successful duo, Crawley and Corwin, edged out Northern Colorado, 6-3.

Palermo’s title was secured Sunday after her final match against Wyoming’s Magdalena Stencel. After dropping the first set 1-6, Palermo stormed back to win the final two sets 7-5, 7-6 (5) to claim individual honors.

Alyssa Grijalva finished right behind her doubles partner with a second-place finish.

“I felt better than the first tournament,” Grijalva said. “I felt more prepared and we felt more like a team, we felt more together. Playing at a home court is so much better. You have the crowd support and love and you’re just used to playing on your own court.”

The team’s primary focus of the tournament was unity and confidence coming off a successful opener at the Creighton Bluejay Invitational.

With a large gap of time until the final fall tournament, there are still some tactical pieces to work out on the court.

“Positioning on the court in doubles is big,” Camerota said. “We have to make sure our positioning is good and focus on getting our feet to the ball. We gotta put in three good weeks of work and then that’s out last fall tournament. It’s our last chance to compete until January against CU.”

The substantial gap between competition dates will give the Rams an advantage to prepare for next month’s tournament.

“We have one more tournament in the fall and honestly I’m just really excited,” Palermo said. “We’ll be down at sea-level so I think that’ll be a good advantage.”

The Rams’ next tournament will be hosted by Western Michigan in Kalamazoo, Mich. on Nov. 5-8.