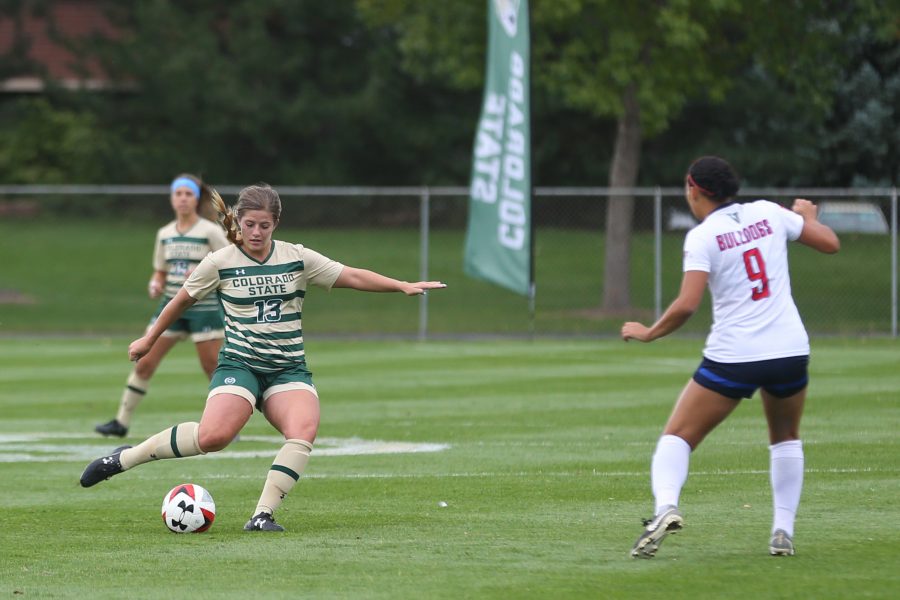 Midfielder Caeley Lordemann sends the ball into Fresno State Territory during the first half of action on Oct 1. The Rams are currently 2-5-4 on the season. (Elliott Jerge | Collegian)

Three unanswered goals from Fresno State in the second half sent the Bulldogs to a 3-1 victory over the Colorado State women’s soccer team in Sunday’s rain delayed match at the CSU Soccer Field.

CSU midfielder Caeley Lordemann opened the scoring in the 27th minute by drilling home a Janelle Stone crossing pass from inside the penalty area, the last of a series of terrific passes that led to the score.

“I think the whole goal in general was just very good,” Lordemann said. “We started on one side of the field and finished on the other. And I thought it was a majority of teamwork, not just me.”

Lordemann led the Rams with five shots in Sunday’s game, an area CSU coach Hempen believes the transfer sophomore can continue to excel in.

“We want her (Lordemann) to shoot because she can,” Hempen said. “There’s some that attempt shots and it’s not in their bag, but she’s got a lot of different things in her bag. She can bend balls, she can clip balls in behind defenders. She’s quite a good player.”

FSU responded in the 63rd minute by jumping on a CSU turnover and setting up Myra Delgadillo for her third tally of the season. At this point in the match, the two sides were neck and neck, mirroring each other in scoring opportunities and goals on the rainy CSU Soccer Field. All that changed in the 75th minute when rain gave way to lightning and the 1-1 game halted until the strikes ceased.

Both teams went into the locker rooms for over an hour, but the Bulldogs came out of the delay playing like a completely different team.

In the 78th minute, FSU forced a throw-in in the CSU defensive zone. The Bulldogs worked the ball to the far side of the pitch and delivered a pass across the goalmouth to an open Carly Brecken. The pass forced CSU goalie Hunter Peifer to move right to left, leaving the FSU forward with an open net to take a 2-1 lead.

Moments later, Lordemann made a terrific individual effort to break into the FSU penalty area and tie up the score, but the ball rang off the crossbar.

FSU collected Lordemann’s rebound and immediately carried the ball back into the CSU penalty area. Senior Peyton Cline worked the ball to Julia Glaser on a cross and the Lörrach, Germany native tallied her seventh goal of the season.

“We’ve been good defensively, but that little onslaught after the rain delay was just shocking to me,” Hempen said.

After the game, Hempen equated playing through the delay like playing in overtime, an area the Rams have struggled so far this season.

“I told the girls it almost felt like overtime,” Hempen said. “If we look at it that way, the last two games we’ve given up goals pretty early in overtime. That’s something that we as a staff have to address.”

Fresno State’s offensive resurgence following the weather delay put Sunday’s game out of reach for the Rams. Despite the loss, Lordemann is pleased with the way her team competed through the unusual circumstances.

“I thought we played really well,” Lordemann said. “I mean obviously the rain delay kind of messed us up, so now we just have to bounce back from it, but I thought we fought hard today.”

The Rams head to Nevada to take on UNLV on Friday at 6 p.m. before wrapping up the week with Nevada on Sunday at 2 p.m.