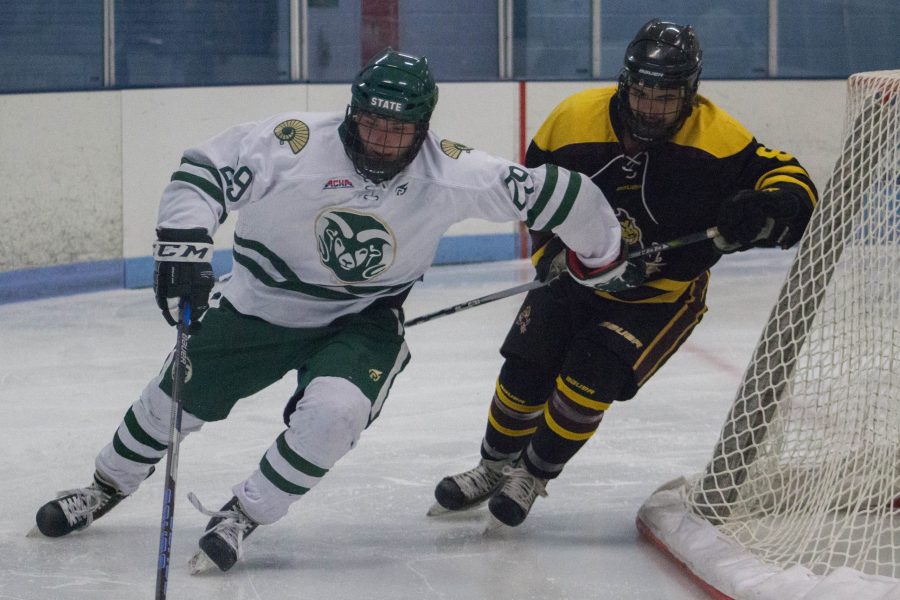 Forward, Austin Ansay, skates behind the Arizona State goal and attempts to score from behind during the game on Friday, Oct. 20. The Rams won 3-2 after a very physical game. (Ashley Potts | Collegian)

During a high-scoring weekend, Colorado State club hockey reversed its recent woes with a 2-1 record. The Rams lost to Arizona on Thursday but rebounded to defeat Arizona State in consecutive games to close the weekend.

In the first game of the weekend, the Rams played Arizona at the Epic Center in Fort Collins. The high scoring affair saw the Wildcats beat the Rams 6-3. Goals from Alec Orme, Austin Ansay and Riley Defazio were not enough for the Rams to overcome the flurry of late goals from the Wildcats.

Arizona applied pressure on the CSU net throughout the third period, resulting in three goals in the final frame alone. One of the goals came on the power play after a penalty on CSU’s Jared Southwell left the Rams shorthanded.

In a bounce back effort from the Rams, CSU overcame Arizona State on Friday evening. CSU started the game with a quick goal from Kyle Riley. However, an ASU goal just minutes later erased the early advantage. Two more goals from Austin Ansay and Ben Joseph were enough for the Rams to get past the Sun Devils despite a late ASU goal.

Dax Deadrick’s performance in net saved the Rams on multiple occasions throughout the night. Deadrick made several saves that allowed CSU to stay in the game even when CSU defenders were beaten down the ice.

“Dax really stole the game for us,” CSU coach Jeff Degree said. “We were outplayed for stretches, but they were just not able to get the puck past him.”

In the final game of the weekend, ASU was out for revenge after the hard-fought loss the night before. The game featured physical play from both teams that lead to many penalties and power plays throughout the game and the ejection of an Arizona State player.

Ansay and Orme once again showed their scoring prowess, giving CSU an early two-goal advantage after the first period. Crisp passing allowed CSU to develop their plays, eventually leading to the goals.

Arizona State bounced back with two goals of their own in the second period to even the score. However, CSU went on to close out the game with four consecutive goals, claiming the 6-2 victory.

CSU freshman Greyson North turned heads this weekend, especially during the second game against Arizona State. On several different occasions, North served as the the last line of defense against an attack ASU offense. Each time, he was able to stop the Sun Devils from advancing on goal. North added two goals of his own late in the game that changed the momentum on the ice and sealed the CSU win.

“Greyson had a great game on Saturday,” Degree said. “In addition to being a strong defender, he scored two goals in the third period that sealed the game for us. He is one of several freshmen we have that are getting better each game and making major contributions for the team.”

After the weekend, CSU has an overall record of 4-5-1-0 on the season. Up next is a daunting task for the Rams as they prepare for undefeated Minot State (9-0-0-0) in Fort Collins at the Epic Center on Oct. 26.

Collegian sports reporter Evan Grant can be reached by email at sports@collegian.com or on twitter @EGrantSports.