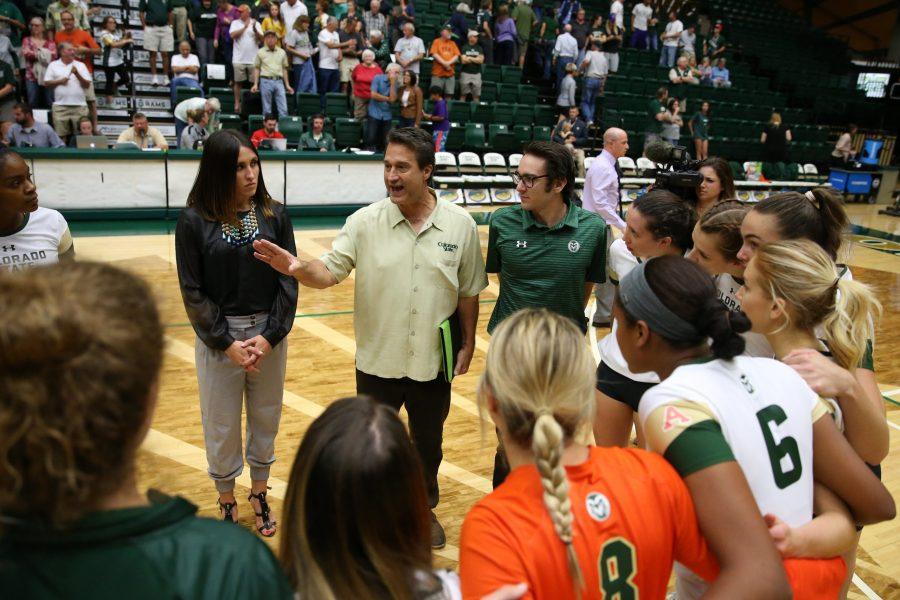 Colorado State Volleyball Head Coach Tom Hilbert talks to his team after a win over the University of New Mexico on Sept 21. The Rams are now 11-2 on the season and 1-0 in the Conference. (Elliott Jerge | Collegian)

Jasmine Hanna led the Rams into their first showdown of the conference season and started hot with four of the team’s first eight kills, enabling an 8-2 lead to be built. Despite slight adjustments by the Lobo front, the Rams were still able to build on their lead, eventually taking the set without ever trailing. A familiar face rejoined the starting lineup as well with Kirstie Hillyer making her way back from injury.

“It was super important (to get back),” Hillyer said. “I worked my butt off trying to get back for conference and I think having the team play so well tonight was awesome. I wanted to be there for my team.”

Hillyer started along with Paulina Hougaard-Jensen as the Rams created a wall, holding the two best New Mexico hitters in Lauren Twitty and Mariessa Carrasco to modest nights by their standards. The duo was only able to muster 18 kills on a lowly .250 hitting percentage.

At the start of the second set, down 1-0, the Rams stuffed three consecutive kill attempts by the Lobos to tie the set, setting the tone for the battle that would ensue. Though heavy favorites, the Rams were forced to scrap their way through the set, finally taking it 25-18 on a net violation by the Lobos. The comeback for the Rams began with a pair of service aces by Amanda Young sandwiching a Breana Runnels kill. Following the service success, Paulina Hougaard-Jensen put together a run of kills to allow the Rams to finally pull away.

“These guys… I find them interesting to watch,” coach Tom Hilbert said. “You have some players on the team, Jasmine is one of them, that when play is not going on, they just kind of walk around, they are cool. I like the personality that this team has taken on, they do not look disrupted hardly ever.”

Timely hitting and not faltering under pressure has been a vital part of the Rams’ persona in their 11-2 record to date. In a match where they played their first familiar opponent of the year, the Rams accomplished what they were expected to do and executed in a quick fashion. With the match flowing the way it did, the Rams were able to take advantage of Hillyer coming back and rested Alexandra Poletto and Hillyer for separate sets in the match.

Hitting was no problem for the Rams with two of their top hitters resting for parts of the match. Riding a hot streak while cooling the Lobos, the Rams out-hit their opposition .337 to .221. The usual culprits in Hanna and Runnels led the way for the Rams on the outside, with Hanna leading the entire match with 15 kills. Katie Oleksak set her hitters up in typical fashion after a down match against the University of Colorado with her 42 assists to easily lead the field. Hitting with vitriol, the Rams sought to avenge their lowest hitting percentage of the year in their previous match (.201).

“I thought Katie Oleksak did a nice job with tempo and doing the things she needed to do,” Hilbert said. “It was also one of the best service receive matches we have had I think.”

Hanna surpassed 1,000 kills and sits at 1,007 kills, inching her way to the all-time kills record for the Rams held by Megan Plourde (1,066). Starting on the left side, Hanna was able to take advantage of the Rams spreading of the ball, which usually leans to the right and middle side of the net.

The Rams will host the UNLV Saturday night in their second conference game of the year. Though the Rebels have been unsuccessful to this point, the Rams will look to play to their full potential and come away undefeated in conference before traveling to Wyoming.