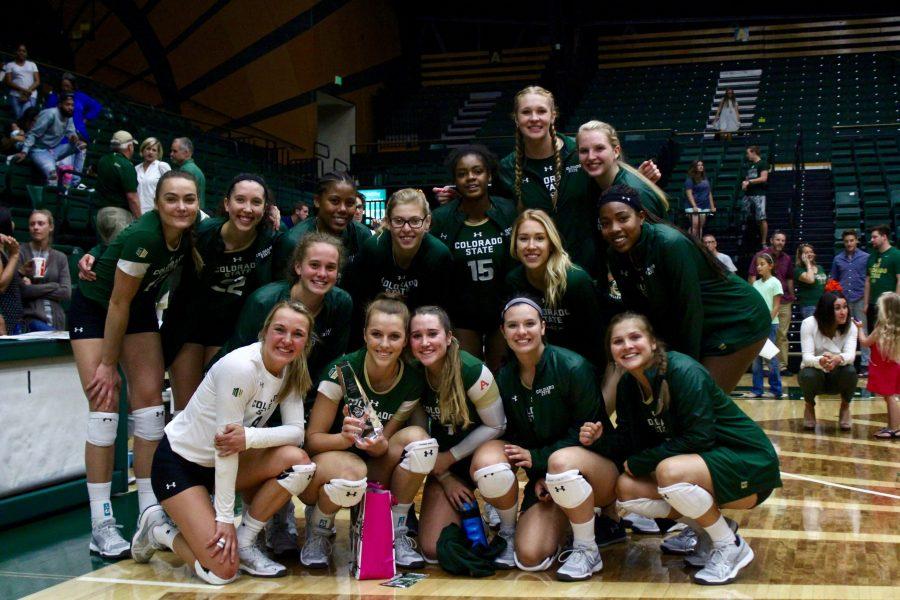 As the volleyball tournament concluded on Sunday September 10, 2017, CSU was the overall winner. During the Sunday game they swept the game versus Idaho Sate winning three consecutive sets. (Matt Begeman | Collegian)

No. 25 Colorado State volleyball won its eighth consecutive game with a sweep over the Idaho State Bengals (25-17, 25-20, 25-18) Sunday to win the tournament hosted by CSU.

Sophomore Katie Oleksak and redshirt freshman Breana Runnels were named to the all-tournament team while senior Sanja Cizmic earned tournament MVP honors. Runnels finished the weekend with a team high 44 kills while Cizmic maintained a .415 hitting percentage for the three matchups. CSU took care of Ball State University and Michigan University on Friday to go 3-0 for the weekend.

As for Idaho State Sunday afternoon, the Bengals (3-7) did not stand much of a chance against the Rams (8-1) as they were clicking in every aspect of the match, head coach Tom Hilbert described.

“I thought we played really well, I think Idaho State just didn’t have a whole lot of opportunity to do much against us,” Hilbert said. “There are still some things we got to get better at but I’m happy with this win.”

Runnels and Cizmic dominated the Bengals defense with 13 and 10 kills, respectively. Runnels had quite a few kills the whole weekend, but also racked up the attack errors in the first two matches with 18. Those mistakes went away against the Bengals as the outside hitter had only three errors.

The tournament MVP, Cizmic hit .421 for the match, highlighted by five kills and a .571 hit percentage in the first set. She helped set the tone for the Rams as they led most of the way in the first set and carried that dominance into the next two sets.

Senior Jasmine Hanna stepped up in the second set with five kills of her own as the Bengals struggled to find the holes in the Rams’ block as CSU had five denials in the set.

The blocking force would continue into the third behind sophomore Paulina Hougaard-Jensen’s four blocks in the final frame. The Denmark native was called upon this weekend to step up in the middle with injuries to Kirstie Hillyer and Alexandra Poletto.

“I think Paulina, of the weekend, she was one of the people that really stepped up and got better from what she was in practice last week and even in last weekend’s matches,” Hilbert said. “I think she saw this opportunity to play a huge role for us and did it.”

“She has definitely grown on the slides, we were connecting really well with that,” Oleksak added. “That’s nice to see that I can trust her, I can dish it out to her back there and I’ll know she will get a kill.”

Senior McKenna Thornlow was also injured all weekend, forcing freshmen Maddi Foutz and Anna Detry to be more involved on the defensive side. The two defensive specialists were able to make big digs throughout the tournament, including another highlight reel play from Foutz.

The Bengals had a short serve over the net in the first set that resulted in the Rams dig flying into the back of their court. Foutz was able to sprint towards the ball and punch it backwards over the net with her left hand. The save ultimately led to a kill by Cizmic and allowed for the Rams to tie it at four.

“They did a nice job,” Hilbert said. “Those kids are very young kids and they are going to make some mistakes but they play hard and they pull out some defensive stuff I really like.”

Overall, the Rams walk away from the weekend with their eighth straight win, still feeling as if they have not fully hit their stride. The injuries have racked up early for CSU and it is tough to imagine what they can accomplish when they are all fully healthy.

“I don’t think we even know yet,” Cizmic said on the team’s ceiling. “I think we realized that we are better than we thought we were going to be…our goal is to try to go undefeated until the NCAA tournament.”

Up next for the Rams will be another home tournament where they will welcome Albany, Xaiver and rival Colorado. The tournament begins for the Rams on Friday, Sept. 15 at 7 p.m. with a matchup against Albany.