Rams knock off No. 16 Michigan to continue dominant week 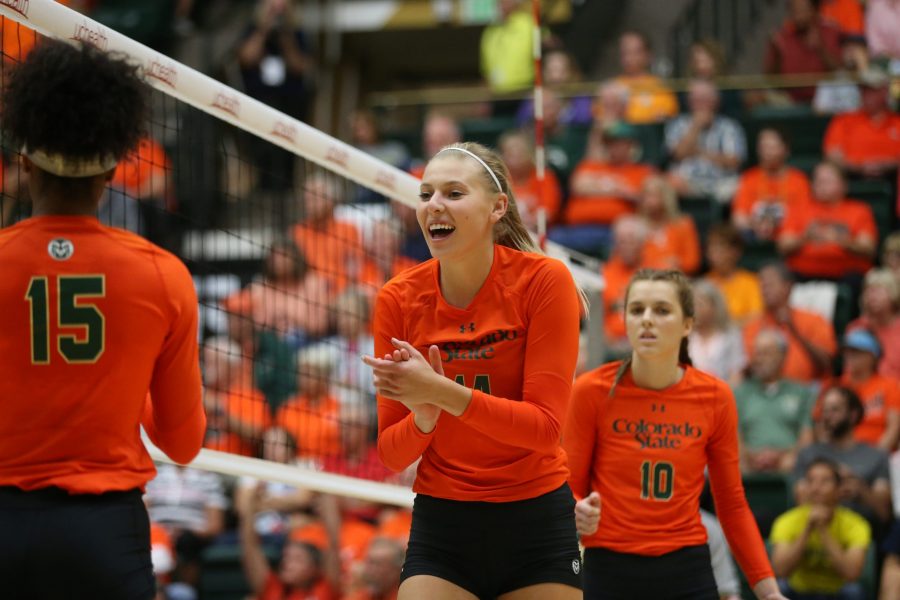 Senior Alexandra Poletto (middle) celebrates a point against the University of Michigan on Sept. 8. The Rams defeated the Wolverines in three sets. (Elliott Jerge | Collegian)

The Colorado volleyball team is making a habit of upsets as they beat No. 16 Michigan in straight sets on Friday night after upsetting then-No.15 Florida State last weekend.

Following a less than stellar effort against Ball State to begin the day, the Rams came out firing in front of a CSU crowd that measured sixth-highest of all time, including many alumni adorned in orange. Opening up the first set with a 6-0 run, aided by an overturned call for the final point of the run, the Rams led the entire set.

The Rams got a familiar face back in their lineup as senior Alexandra Poletto returned to the middle and provided a spark, hitting .625 in the match.

“After yesterday’s practice, I did not think she was going to get to go,” head coach Tom Hilbert said. “I thought she did well, Katie (Oleksak) used her exactly how she should. She was a pretty good blocking force up there.”

Not to be forgotten, Paulina Hougaard-Jensen shined in place of Kirstie Hillyer. Hougaard-Jensen finished two behind kills leader Sanja Cizmic (13) and finished with a lofty .611 hitting percentage. Hougaard-Jensen has performed at a high level amid an injury-riddled Rams team and has provided a wall in the middle.

Going into the second set with all of the momentum, the Rams fell behind early before going on a 6-0 run with a pair of blocks to go up 7-4. Outside of the beginning of the set, the Rams controlled the set throughout and kept the ball in their court, taking the set 25-22.

Despite seeming to tweak her leg in the first set, Cizmic battled through and turned in a gritty performance, indicative of CSU’s season. The Rams have overcome adversity from the first match of the year, losing a five-set match to Duke. Maturity has been the key to the Rams’ success and ability to persevere through trouble.

“We played with really great maturity,” Hilbert said. “These guys are stepping up in (big) situations.”

Michigan fell victim to a lackluster defensive performance in which every ball seemed to roll in the Rams’ favor. Wayward dig attempts were the story for the Wolverines’ lack of momentum and came often throughout the match. The team’s effort level rivaled that of any match they have played this year as they sought to impress in front of past CSU volleyball personnel.

“We got a lot of messages the past week,” Cizmic said. “We wanted to show them we can continue the tradition.”

The Rams cruised through the third and final set, taking it 25-18 with few high stress points intertwined. Michigan hit .368 in the final, their lowest of any set in the match. Meanwhile, the Rams hit with success as they swung .500 in the deciding set.

Katie Oleksak continued to be the glue of the team with another 42 assists to add to her season total of 359. Oleksak played a smart game and was able to incorporate several hitters. As a team, the Rams had three players with double-digit kills, as well as Jasmine Hanna who finished with seven, coming on strong at the end.

“Katie did a good job of distribution,” Hilbert said. “She really got some good opportunities for (Hougaard-Jensen and Cizmic). She picked great times to set and we had one-on-one opportunities at kills.”

In its entirety, the match featured a mere four blocks for each team, allowing the Rams outside hitters to send uncontested attacks over the net. Despite the advantage on the outside, both teams hit well in the middle and the Wolverines were able to take advantage of the Rams’ dwindling depth. In spite of a lack of blocks, the Rams still applied pressure and played at a high level on the defensive side.

“We only stuffed four balls,” Hilbert said. “But we funneled stuff and did a nice job on their pin hitters. We dug stuff that came off the block and we took the line for the most part to the very end.”