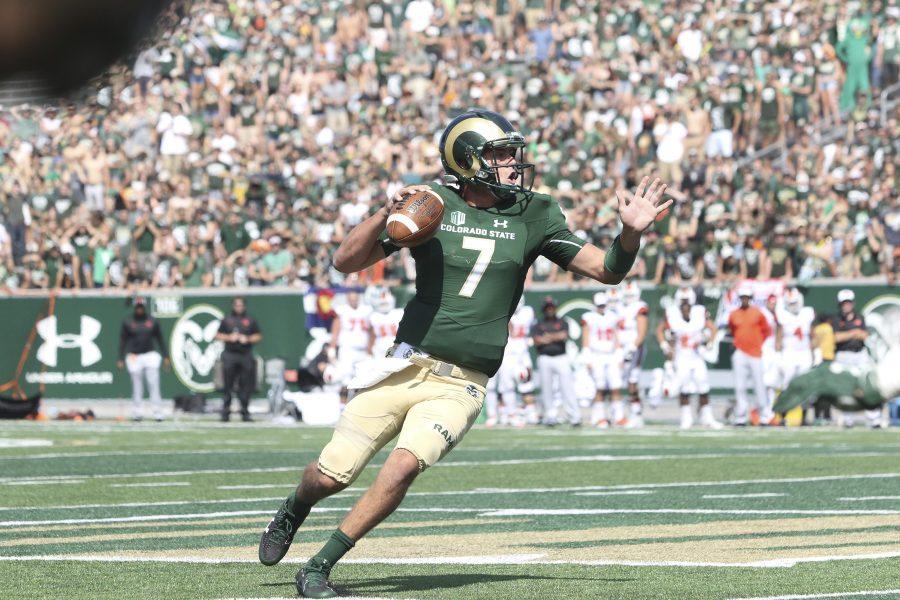 Senior Quarterback Nick Stevens (7) scrambles out of the pocket looking downfield for an open receiver during the second half of the 58-27 victory over Oregon State on Aug. 26, 2017. (Javon Harris | Collegian)

An easy interception into the hands of Colorado safety Tedric Thompson was the nail in the coffin for Colorado State quarterback Nick Stevens during the 2016 Rocky Mountain Showdown.

At that point, the game was all but over for CSU. The Buffaloes were already leading 34-0 in the third quarter and Stevens had thrown his second interception of the game. In more than two quarters of play, Stevens threw for only 31 yards and coughed up a fumble to go along with the two interceptions.

Head coach Mike Bobo had seen enough. Faton Bauta replaced Stevens for the rest of the contest. After starting 14 consecutive games for the Rams, Stevens became a backup.

“I definitely felt personally responsible,” Stevens said. “Obviously you wish things could be different, but you can’t blame him (Bobo) for that. At the end of the day I didn’t play well and what happened, happened.”

The future for Stevens was up in the air after the forgettable showing against CU. However, it was unknown at the time that last season’s RMS would be the lowest point of his career.

After backing up freshman Collin Hill and senior Faton Bauta for the next five games, Stevens reignited his success. Bobo once again named Stevens the starting quarterback against Boise State in mid-October after Hill went down with an injury. This time, Stevens didn’t let the chance slip away. The Rams have gone 5-3 overall since then and Stevens has thrown 22 touchdowns and only four interceptions.

Teammates have noticed a much improved Stevens heading into the 2017 RMS.

“I think he is worlds better,” junior wide receiver Olabisi Johnson said. “He gets benched after the CU game which is tough but he kept his head up. Collin gets hurt and he came back in and had a great year. There aren’t a lot of guys out there that can do that. Nick kept his head up the whole time and I praise him for that. We all see how much Nick has grown. He has become such a big leader for our offense and for our team.”

Though Stevens was on the team during CSU’s 31-17 victory over CU in 2014, he did not play. The first time Stevens played against the Buffaloes was in 2015. Stevens threw for 282 yards and a touchdown while turning the ball over twice in that game. Although he was effective, the Rams still lost the game 27-24 in overtime. Stevens is hoping that the third time against CU will be the charm.

“I think it would mean a lot if we went out and won this game,” Stevens said. “We have something to prove and coach hasn’t won yet (against CU) and he’s wanting to change that. I think we have the team this year to do that.”

Beginning the season 2-0 against Pac-12 opponents would be a significant confidence booster for CSU. Winning every game is obviously important to Stevens, but given his performance last season, there is a chip on his shoulder.

“Human nature is when you don’t perform well you want to go out and redeem yourself,” Bobo said. “So I’m sure he wants to go out and put a better showing than we had last year. We have to do the things that will help us be successful. I think he’s mature enough to know that’s going to help him perform better than he did last year.”

The Buffaloes have dominated the all-time series with the Rams, winning 64 of 88 contests and seven of the last 10 games. Despite the fact that Stevens wants to bring home a victory to redeem himself, he also wants to win for CSU supporters.

Even though the quarterback grew up in California, the rivalry is just as significant to Stevens as it is to Colorado natives such as Olabisi Johnson. Stevens wants Rams fans leaving Denver happy on Friday.

“I think we have to come out and really show up for our fans,” Stevens said. “You want to give them a good show and we have a lot of good momentum going right now. We don’t want what happened last year to happen again. The rivalry means a lot to all of us and we have to do our best to come out and have success.”

The Rams are one of 10 teams to have played a game so far in the 2017 season. In most cases, the first week of the season is the game in which a team knows the least about itself. Game one almost always serves as a crucial time for players to get accustomed to the intensity of regular season play. The difference between fall camp and four quarters of real football is immense.

On the other hand, The Buffaloes have yet to play a game so far this season. While CU’s core players haven’t played a snap together since February, CSU’s are fresh off a convincing victory over Oregon State.

Nick Stevens thinks this early action could be an advantage for the Rams.

“We are battle tested,” Stevens said. “I think it gives us a huge edge. We know that we’ve been to war together and we’re able to depend on each other.”