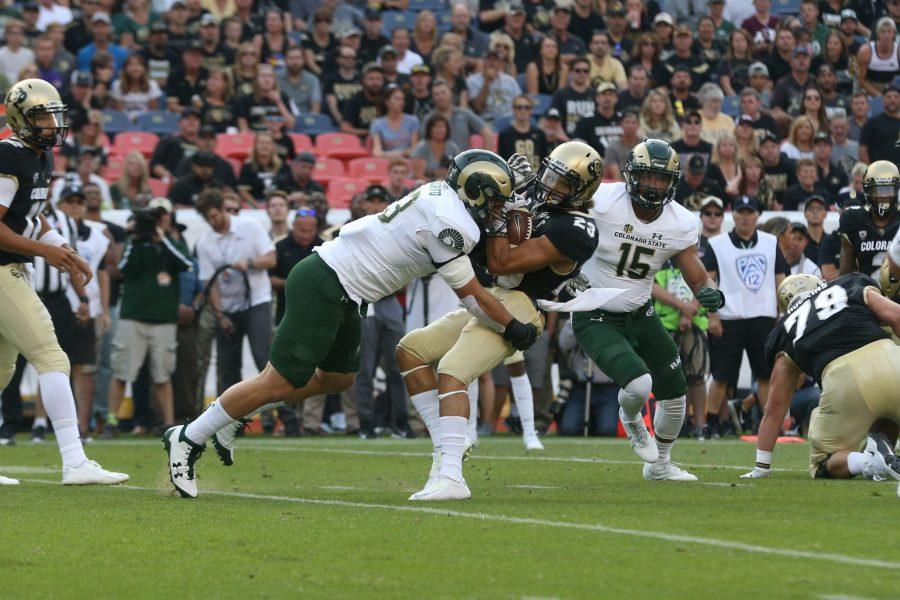 DENVER- Colorado State senior Evan Colorito makes a tackle on a CU player during the first quarter of action during the Rocky Mountain Showdown. The Rams lost 17-3. (Elliott Jerge | Collegian)

Colorado State redshirt senior linebacker Evan Colorito was practically born with a football in his hands.

Colorito’s older brother grew up playing football and his father, Anthony, had a lengthy playing career that took him to the NFL. Colorito recalls a childhood filled with tossing the pigskin around the yard and spending weekends watching games on TV. Even around the holidays, his eyes would be glued on the television for Thanksgiving NFL games.

It comes as no surprise that a football oriented family watches football while surrounded by friends and family on Thanksgiving. However, there is something unique about the Colorito family’s Thanksgiving pigskin viewing tradition.

For as long as he can remember, the Coloritos would watch a replay of the 1986 AFC Championship every Thanksgiving, a game in which the Denver Broncos defeated the Cleveland Browns 23-20 at Cleveland Municipal Stadium.

This game was the peak of Anthony Colorito’s playing career. Anthony was a rookie at the time, and served as a backup nose tackle for the Broncos after being selected 134th overall out of USC in the 1986 NFL Draft. His career was cut short soon after Denver’s Super Bowl loss to the Giants that season after suffering a knee injury in a 1987 exhibition game.

Regardless, watching his father play alongside John Elway, Karl Mecklenburg and other Bronco greats put a twinkle in young Evan’s eyes. Evan started playing tackle football in third grade, but the Beaverton, Ore. native yearned to put on the pads before then.

“Evan really wanted to play ever since second grade,” Anthony said. “I almost put him on a third-fourth grade team when he was in second grade because he was so eager to play football. As soon as he was able to play contact football, he played it.”

Anthony experienced Evan’s early playing days in a hands-on manner, coaching his son from third to eighth grade. Evan played on both sides of the ball during this stage of his career, playing running back and linebacker under his father’s tutelage.

Even through high school, the CSU linebacker also played running back. Evan’s involvement was not a result of his father being the head coach, it was because he dominated. That’s not to say his father went easy on him in any way, though.

“He was way harder on me,” Evan said. “If I would mess up, he would yell at me. If someone else messed up, he would kind of baby them.”

It was no secret that Anthony was pushing his son harder than the rest of the team. Whether one agrees with this tactic or not, Anthony did this for Evan’s sake. He knew what it took for his son to be great and he wasn’t going to settle for anything less than 100 percent. As a 22-year old senior in college, the CSU linebacker recognizes how his father’s approach has benefited him.

“I think he understood I could take the pressure and understood the potential I had, which allowed him to be harder on me,” Evan said. “It just helped in every aspect of my life. He was a great coach and a great father figure as a football dad. It really helped me become the player I am today.”

Anthony’s coaching extended to more than football. Evan described how his father always made sure he gave everything his all. From school, to homework, to hobbies, Anthony expected effort in everything his son did. Whether it is because Anthony did what it takes to make the NFL or just because he was an ideal role model and leader for Evan, it is evident that Anthony’s influence has made a difference in his son’s life.

Anthony instilled key values such as hard work, perseverance, determination and grittiness into Evan at a young age. All of the values are still evident in Colorito’s game today, something that does not go unnoticed by head coach Mike Bobo who praises Colorito’s work ethic and uses his efforts in practice as a model for the rest of the team. Bobo gives Colorito all of the credit he deserves, but he also acknowledges that Colorito’s approach to the game very well could trace back to his NFL roots.

“It’s evident that he was raised to know what work ethic means,” Bobo said. “He works extremely hard. Guys with NFL history know the value of hard work and what you get out of it. They’re those guys that you only need to say something to one time and they’ll go to the standard you expect.”

Colorito has been a team captain for three of the Rams’ four games so far this season. More than anything else, this is a testament to the way he approaches the game every day.

“His eagerness and demeanor about football is like no other,” fellow CSU linebacker Josh Watson said. “He has that dog mentality. He loves to compete and hates to lose.”

While he does deserve some credit for it, Anthony believes his son is the player he is today because of his work ethic. This hard-knock mentality on the field goes back to Evan’s early days playing under his dad.

During one of his first seasons playing tackle football, Evan got his forearm crushed between two players during a play in practice. Anthony took his son to get X-rayed, only to find that the results were negative. Evan refused to sit out a game. Since there was no visible damage, Anthony allowed him to keep playing.

Just a few games later, Anthony noticed his son clutching his arm against his body. After being re-evaluated, it was discovered that Evan had a stress fracture that didn’t show up on the initial X-ray. It turned out that Evan played two full games with a broken forearm without wearing a cast.

Still, he didn’t say anything about the crack in his forearm before doctors discovered it. Not even a peep. That’s just the type of player Evan was, and still is to this day.

“Nothing describes his toughness more than when he broke his forearm in fifth or sixth grade,” Anthony said. “He’s the type of kid that will play with a broken arm to support his team and won’t even say anything.”

While Anthony technically stopped coaching Evan in high school, his frequent advice and critiques never stopped. Anthony continued to discuss the game with his son. He even described that he watches Evan’s games like he watches game film and believes their relationship today is stronger than ever.

“Every week he sends me a breakdown of the team I’m playing or a breakdown of what I need to do to be better in the upcoming game,” Evan said. “He comes to every game he can as long as it doesn’t conflict with work. He’s always been one of my biggest supporters on and off the field.”

Though the NFL hype surrounding Evan is not as prominent as it was for his father, Anthony has no doubts about his son’s potential.

“In a lot of ways I think he’s a better football player than I was,” Anthony said. “I think he’s got more upside right now than a lot of guys because of his speed. He’s still growing, he’s still putting on strength and he hasn’t had any major injuries. I think he has a lot of upside and definitely has a chance to play at the next level.”