Next level Rams: Former CSU players cut over the weekend 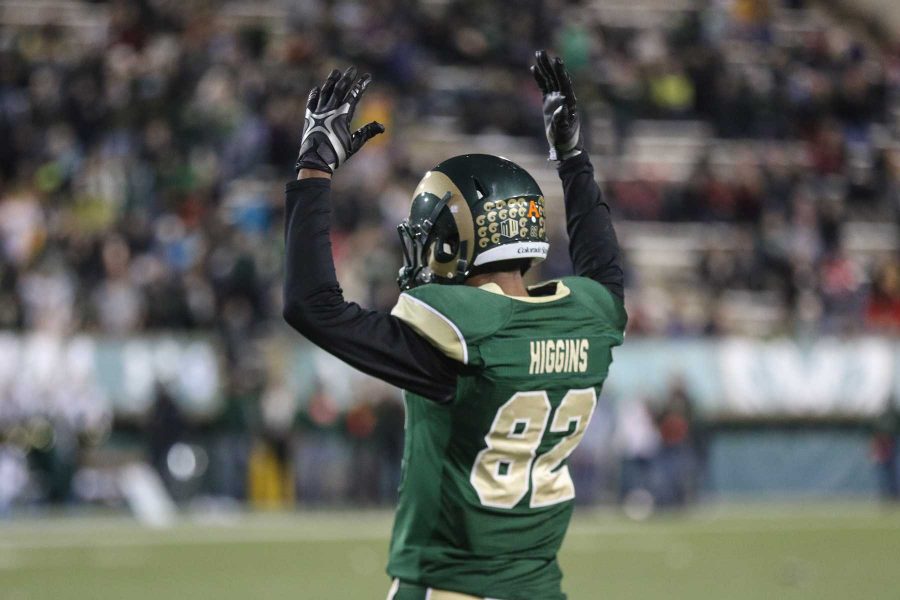 Colorado State wide receiver Rashard Higgins could have a big day against Nevada's secondary in the Arizona Bowl. (Abbie Parr/Collegian)

Labor Day weekend was an unfriendly one for many former Colorado State football standouts. With NFL teams announcing their initial 53-man rosters for the 2017 season, many notable former CSU players experienced the harsh reality of being cut.

For the first time in the history of the National Football League, organizations were able to hold up to 90 players on a roster before final cuts on Saturday, Sept. 2. At the end of the process, five former Rams were cut from their respective rosters.

Rashard Higgins, Garrett Grayson, Kapri Bibbs, Kevin Davis and Crockett Gillmore were all waived before the end of the day Saturday.

DeAndre Elliott, who was expected to contribute for the Seattle Seahawks at the cornerback position, was placed on the team’s injured reserve after suffering a broken ankle during the team’s third preseason game. Elliott made the roster as an undrafted free agent in 2016. In 43 career games at CSU, Elliott recorded 124 tackles (92 solo) and seven interceptions.

Higgins was drafted in the fifth round of the 2016 NFL Draft by the Cleveland Browns. He recorded six receptions for 77 yards during his rookie season last year. Coming into 2017, he figured to compete for a roster spot with other young receivers in Cleveland. Higgins logged 26 yards on three receptions this preseason before being cut. After clearing waivers, Higgins reportedly signed with Cleveland’s practice squad.

The New Orleans Saints waived quarterback Garrett Grayson after a less than enthusing preseason performance. In his final preseason performance, Grayson completed two of 13 passing attempts for 32 yards. A former third-round pick, Grayson had spent the majority of the past two seasons on the Saints practice squad. Grayson has yet to sign with another team.

Prior to going down to the big easy in 2015, Grayson had one of the most successful careers of any CSU quarterback ever. The Washington native owns CSU career records for yards with 9,191 and completions with 688. Against Boise State in 2013, Grayson set the CSU single-game record for completions with 36.

Of the cuts, running back Kapri Bibbs may have had the most success in the NFL to this point. As a member of the Denver Broncos last season, Bibbs was given playing time down the stretch before injuring his ankle. He was traded to the San Francisco 49ers in the offseason, but was unable to beat out other running backs.

Last year’s defensive MVP for CSU, linebacker Kevin Davis went undrafted before signing with the Los Angeles Rams at the end of April. Davis cleared waivers and was subsequently placed on injured reserve by the Rams after suffering an undisclosed injury. According to CBS Sports, Davis will likely be given an opportunity to earn a roster spot again next season.

Similarly, tight end Crockett Gillmore was placed on the Baltimore Ravens’ injured reserve after clearing waivers. Gillmore tore his MCL prior to the beginning of preseason, a common trend in his three seasons with the Ravens. When healthy, Gillmore has been a reliable target in the passing offense, but the former CSU tight end has missed 16 games due to injury since 2014.

That said, there are still plenty of former Rams who made a roster and figure to make a significant impact in 2017.

Weston Richburg, center for the New York Giants, is widely regarded as one of the best centers in the NFL. Pro Football Focus rated Richburg as the best pass-blocking center in 2016. The former second-round pick will look to build on his impressive campaign.

Denver Broncos linebacker Shaquil Barrett will start for the team during week one. Barrett missed the preseason while recovering from a hip injury. The young outside linebacker has played significant snaps for the Broncos in each of the last two seasons.

In the same division, linebacker Cory James will start for the Oakland Raiders. As a rookie last year, James started five games and recorded 31 tackles.

Offensive tackle Ty Sambraillo was traded from the Broncos to the Atlanta Falcons this preseason. The former second-round pick is currently listed as the team’s backup left tackle.