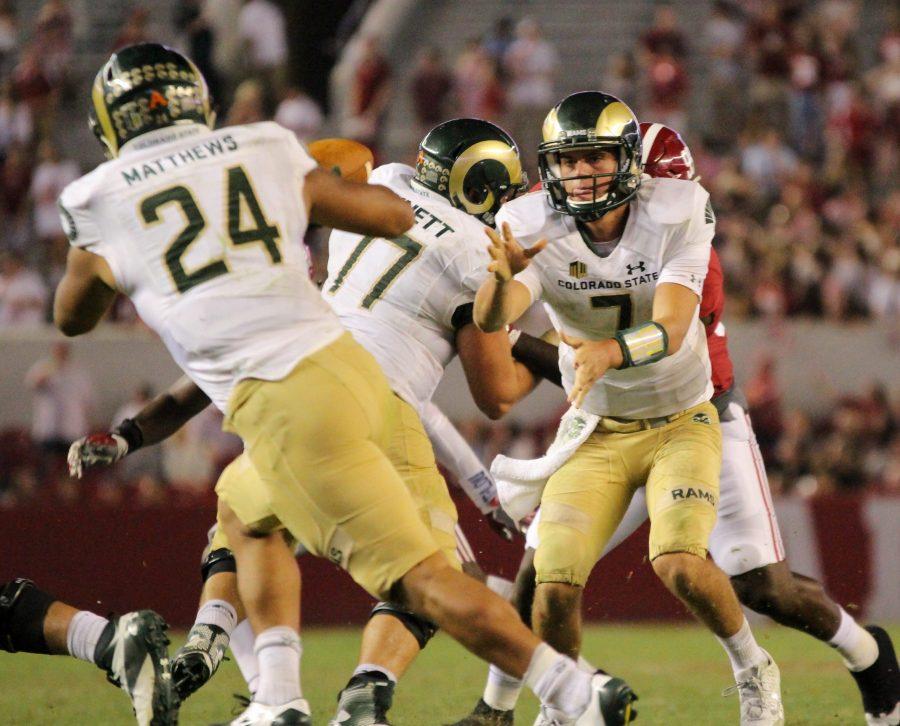 TUSCALOOSA - Quarterback Nick Stevens (7) pitches the ball to running back Izzy Matthews (24) during the second half against Alabama on Sept. 16. (Sam MacDonald | Crimson White)

When I began the roughly 1,400 mile journey from Fort Collins to Tuscaloosa, Ala. last week, the first thing I thought about was how special it was for all of the Colorado State players, coaches and fans to get to experience college football at the highest level.

As someone that has followed both the Alabama and CSU football programs throughout my entire life, getting to cover a game between them was something I personally had looked forward to for months. It was genuinely a dream come true. I grew up watching SEC football every Saturday on the couch with my father and have spent the last five years involved with Mountain West football, so actually getting to experience the game firsthand was probably the greatest experience of my young life.

Going in I knew that a game day in Roll Tide country would be like nothing that I had ever experienced before. I had heard the tales of crazy Alabama fans and certainly have attended plenty of college football games in my day, but witnessing the juggernaut that is the Alabama football program in person is truly an experience in its own.

A sea of crimson with over 100 thousand fans cheering on the Nick Saban-led Tide, everything about Saturday surpassed my wildest expectations. From the miles of tailgates stretching every direction from the stadium, to the Tide faithful singing “Sweet Home Alabama” at the top of their lungs to the Walk of Champions, everything about the game day experience was larger than life.

While the intensity and passion of the Crimson Tide fans was never in doubt, the hospitality displayed was quite surprising to me. Walking around the Alabama campus in the hours leading up to kickoff, fans everywhere were extremely welcoming and eager to hear about how our trip was going.

Many offered us a plate of food or a seat in their canopy. Everywhere that I went, the people were genuinely hospitable and welcoming. Of the nearly 30 CSU fans that I interacted with on the trip, their experiences mirrored mine. Even dressed in green and gold, the CSU supporters were not harassed by the locals. Instead, they were offered an ice cold glass of Yellowhammer, an Alabama game day classic.

When the Rams entered the field Saturday, there were naturally some jeers from the fans, but they did not come out to a truly hostile environment. They came out to a crowd that got loud on third down and supported their team from start to finish.

Following the contest, the students sang and the fans filed out of the stadium. Business as usual for the Crimson Tide. But for CSU, who scored 23 points against one of the elite defenses in the nation and proved they can hang with anybody, the experience was invaluable.

From a talent standpoint, the Rams know that they just competed with the best team in the country. If they execute similarly in conference play, they are going to have a serious chance to make a run at the Mountain West title.

From an experience standpoint, CSU once again proved to be a mentally strong unit, responding and competing with the Tide after going down 17-0 early. Not to mention the fact that this team once again performed well when the lights were brightest, a common theme in 2017 so far.

The Rams also benefited from exposure, going toe-to-toe with the No. 1 team in college football in front of a national TV audience. CSU has had its moments in the spotlight over the years, primarily under Sonny Lubick at the beginning of the century and most recently in 2014 when the team finished 10-2. There is no denying that hanging with No. 1 Alabama on ESPN2 is the most relevant the Rams have been on a national scale in the last few years though.

More than the exposure and fat paycheck that comes from playing the Crimson Tide at Bryant-Denny Stadium, Saturday’s game was a chance for quite a few childhood dreams to come true.

Leading up to the game, head coach Mike Bobo explained that getting a chance to play athletics at any collegiate level is something to be proud of. But the reality is that every young football player grows up dreaming of playing in premier places like Death Valley, the Rose Bowl or Bryant-Denny Stadium. Last Saturday, the majority of players were stepping onto an SEC field for the first time and that it something they will remember for the rest of their lives.

There are many people who believe that the Power Five should not play schools from the MW, but for all of the reasons listed in this column, Saturday was an overwhelming success for the CSU football program and a great experience for everyone involved.

With multiple opportunities to see the Rams in SEC country over the next five years, I highly recommend hitting the road and experiencing the epitome of a perfect college football game experience.