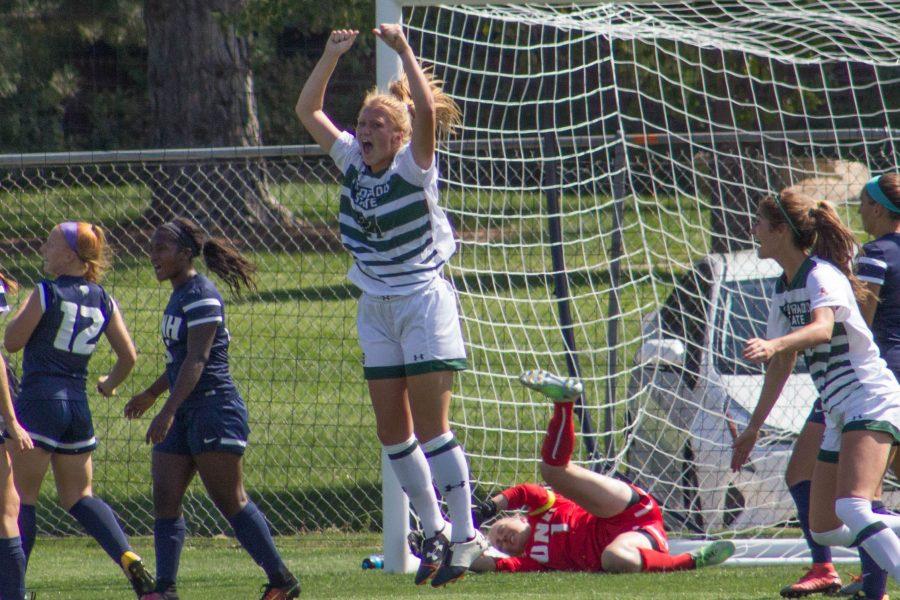 Halley Havlicek celebrates scoring her first career goal with the Rams during the game against University of New Hampshire on Sunday afternoon. The Rams lost 2-1. (Ashley Potts | Collegian)

A New Hampshire goal in the 75th minute broke the 1-1 tie and sent the Wildcats home with a 2-1 victory over the Colorado State women’s soccer team on Sunday afternoon at the CSU Soccer Field.

Following Friday’s convincing 5-1 win over New Mexico State, CSU looked to carry the offensive momentum into Sunday’s match. However, it was New Hampshire who rattled off the first four shots of the game.

With the game scoreless in the 23rd minute, CSU subbed in Hannah Gerdin and Rams’ leading scorer Ally Murphy-Pauletto to give the team an offensive spark. Gerdin had CSU’s only two shots of the half, but the Rams couldn’t capitalize and went into the break scoreless.

CSU was unable to execute a penalty shot at the beginning of the second half. When New Hampshire’s leading scorer Brooke Murphy had an opportunity in the 55th minute, she sent a shot over the head of CSU goalkeeper Hunter Peifer and into the roof of the net.

Despite being down by a goal and not having much offensive momentum, the Rams stuck to their core values and showed resilience.

“Resiliency is one of our core values that we’ve been really focusing on,” CSU sophomore defender Halley Havlicek said. “I even write it on my wrist before every game. I think we’re definitely fighting back more. We’re not putting our heads down when we’re behind, we’re picking it up and going back at them.”

CSU took back the offensive momentum following the UNH goal when Havlicek cashed in on a powerful shot from just outside the penalty area in the 74th minute. Assisted by Maddi Rodriguez, the game-tying goal was the first of the sophomore defender’s collegiate career.

“(My first career goal) felt amazing. I have been waiting for this forever,” Havlicek said. “I’m defense so I don’t get many opportunities, but it felt nice to put this one away.”

Havlicek’s goal began off a corner kick, an area of the game coach Bill Hempen believes the Rams are excelling in.

“(Corner kicks) are moments of the game that are battles. You out-duel your opponent,” Hempen said. “Your judgment for the service is just a little bit quicker than the opponent. We’ve been doing a lot of that right now.”

The Rams piled around Havlicek following her first career goal, but the excitement for CSU was short-lived. One minute after CSU tied the game, UNH marched through the CSU defense and forward Kaylan Williams snuck a shot past Peifer.

“I was miffed by the lack of defensive pressure really all the way up the field,” Hempen said about the game-winning goal. “It felt like we were looking at each other saying ‘you do it, you do it’ instead of ‘I’ll do it.’ It looked like there was some confusion defensively on if they were going to pressure or not.”

In the final 15 minutes, the Rams battled to tie up the score, but couldn’t find the equalizer. The Rams’ ability to capitalize on scoring opportunities is an area Hempen thinks the team can improve on.

“We run out of ideas in front of the goal too often,” Hempen said. “We tend to give into what’s ever there in front of us when there might be a better option.”

The Rams’ next chance to get back in the win column will be on the road this Thursday at 6 p.m. against SIU-Edwardsville.