CSU volleyball set to host tournament highlighted by No. 16 Michigan 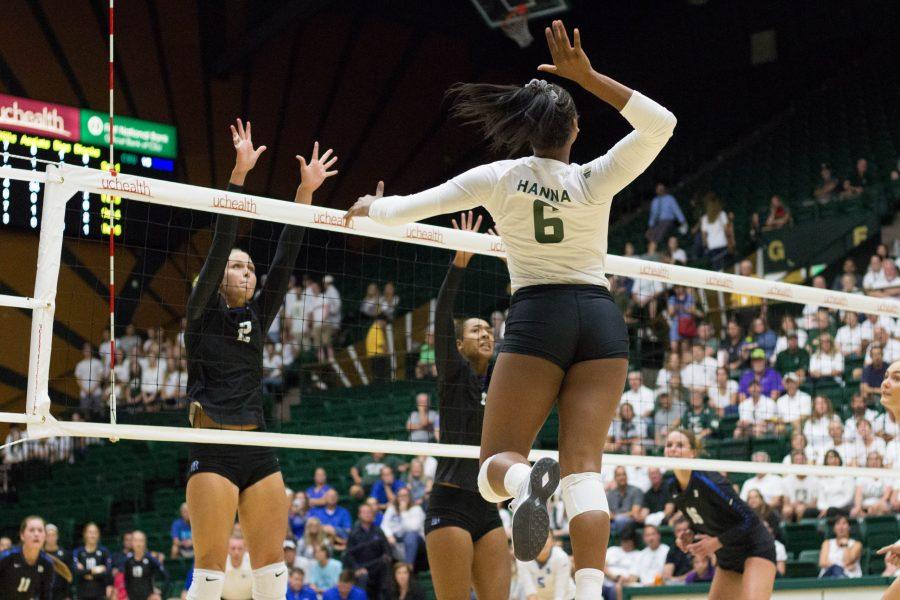 Senior outside hitter, Jasmine Hanna, jumps up for a hit against two Duke blockers on August 25. The rams lost the home opener after a hard fought five sets. (@ashleypottsphoto | Collegian)

Freshly ranked at No. 25 in the nation, the Colorado State volleyball team returns home this weekend to host its first tournament of the season at Moby Arena. Ball State, Michigan and Idaho State will all make the trip to Fort Collins to participate in the action.

The tournament begins Friday for CSU (5-1) who will look to continue its five-game winning streak with a matchup against the Ball State Cardinals (5-2). The Cardinals boast a roster that tries to use height to its advantage. Out of the 18 girls on the roster, 10 of them are at least 6-feet tall, including 6-foot-6 Meg Starling.

“We were surprised how physical they were,” head coach Tom Hilbert said. “You do the same things (to combat height)… You just play the game the best you can and try to use your athleticism to beat theirs.”

Starling leads the Cardinals in total blocks with 23 through their first seven games. She also has the team’s best hitting percentage at a .337 clip and has 48 kills on the year. The offense will not solely come from Starling, though, as junior Brooklyn Goodsel leads the Cardinals with 90 kills through seven matches.

Ball State will not be the only challenge Friday as the Rams will have to gear up again when they take on No. 16 Michigan on Friday evening.

Last week, the Rams were able to take down the then-No.15 Florida State Seminoles on the road despite not having Mountain West Player of the Week Kirstie Hillyer for half of the match.

In the absence of Hillyer, sophomore Paulina Hougaard-Jensen stepped up in the middle blocking position and was able to help guide the Rams to a win with a team high four total blocks. That will have to be the case again this week as coach Hilbert announced Hillyer is not available this weekend due to her knee injury.

The Rams will need all the blocking help they can get in their second matchup as Michigan already has four players with 50 kills or more through six games and another player at 48 kills. Of the Wolverines five wins, four have been sweeps and their one loss was on the road against the University of Southern California.

While Michigan is not as tall as Ball State, the Wolverines still have many options for attacking which includes senior Adeja Lambert who leads the team in kills with 65. Right behind her is junior Carly Skjodt and senior Claire Kieffer-Wright who have 58 and 55 kills, respectively.

“They are challenging because they’re so talented that…if we commit to one thing and they see it they’ve got players who could just bury the ball,” Hilbert said.

The Rams will end the week on Sunday when they match up with Idaho State (3-4). The Bengals come to Fort Collins on a two-game losing streak and will face Michigan and Ball State the days before.

Redshirt senior Chloe Hirst is the Bengal with the loudest roar this year as she leads her team in kills with 97. However, she only hits at a .202 clip. The Bengals as a whole hit only .236 while allowing their opponents a .234 percentage.

Those struggles are seen by their low blocking numbers as redshirt sophomore Brooke Pehrson leading the team with 19 total blocks. The Rams outside hitters of Jasmine Hanna, Breana Runnels and Sanja Cizmic will try to take advantage of the Bengals’ potential weakness.

Game one against Ball State is set to begin at 12 p.m. Friday before the Rams face Michigan at 6 p.m. The matchup against Michigan will serve as the team’s annual Orange Out game. The week will end on Sunday against Idaho State with first serve set for 12 p.m.