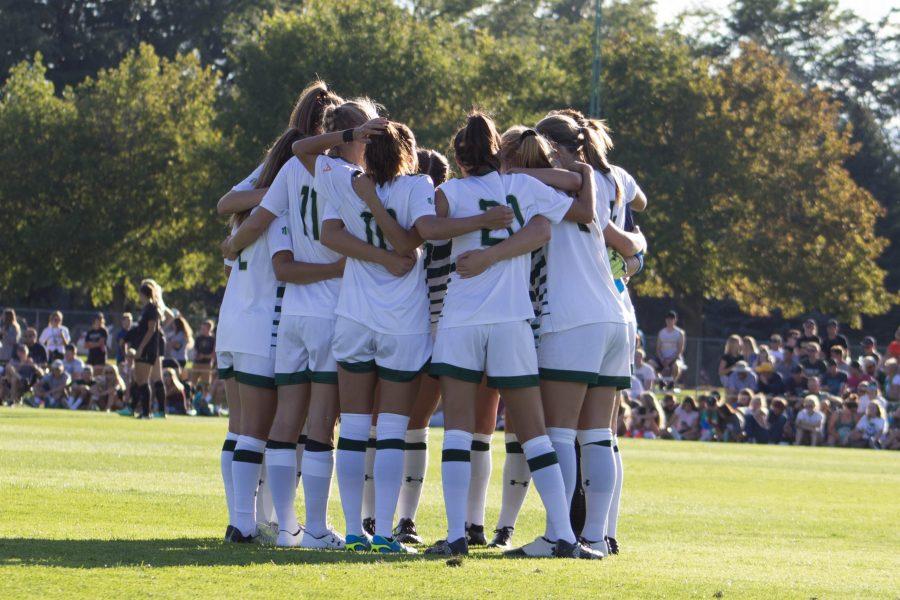 The Rams huddle up before taking the field for overtime play during the home opening game against the Buffs on Friday, August 18. CSU and CU ended the game tied at zero. (@ashleypottsphoto | Collegian)

The Colorado State women’s soccer team wrapped up its non-conference schedule on Sunday with a 3-2 overtime loss to Kansas State and a 2-4-2 record. That record can be thrown out the window, though, as the Rams shift their attention to competing for a Mountain West title.

Since the Rams joined the 12-team league in 2013, CSU hasn’t finished above 11th place. In that same timeframe, San Diego State has claimed the regular season title three times. Although it’s a new season, the Mountain West coaches expect the trend to continue as the Aztecs are selected to win the conference and the Rams are projected to finish 11th.

Despite the preseason rankings, CSU coach Bill Hempen thinks there’s too much talent in the league for one team to run away with the title.

“I really think this conference is pretty talented,” Hempen said. “I think anybody can beat anybody on any given day. No matter the surface, whether it’s a home, or away game, every game is going to be grind.”

The Rams’ goal is to win a conference title, but finishing in the top six would be a program first and earn them a berth in the conference championship at the end of the year. To make that a reality, Hempen knows the Rams have to capitalize on the little things in such a competitive division.

“We talked to the kids this week about how the difference between winning and losing has gotten so much narrower,” Hempen said. “Slide tackles, diving headers and anything you can do to be one step ahead of your opponent more often than not is one of the things we’ve concentrated on a lot heading into conference play.”

CSU opens conference play this weekend with two games in Colorado Springs, beginning with Air Force on Friday night. Last season the Falcons finished 10th in the conference, the same position the Mountain West coaches project them to finish this season.

Although Friday’s game is only the conference opener, the Rams are anticipating a battle.

“Right out of the shoot you may think, ‘Ok we can ease into the conference,’ but no you can’t,” Hempen said. “Especially when you’re playing the likes of an Air Force Academy who’s going to come up and punch you right in the nose right from the time the whistle blows.”

On Sunday afternoon, the Rams head across town to take on Colorado College. CC finished the 2016 season ninth in the conference and the Mountain West coaches expect them to do the same in 2017.

Only a handful of miles separate the Falcons and Tigers, but the crosstown rivals’ playing styles couldn’t be more different.

“The Academy kids run through a wall, that’s what they’re supposed to do and they do it on the soccer field as well,” Hempen said. “The Colorado College kids are probably going to try and finesse us to death. They’re probably going to have the ball a good bit of the game, so we have to make sure we’re in the right spots to pick them off.”

Regardless of the playing style or opponent, Hempen and the Rams know that every Mountain West match will be a fight to the finish.

“Every game is going to be a battle,” Hempen said. “Everyone is fighting for those six spots, so it’s going to be knockdown, drag-out from the time the whistle blows on Friday evening until it ends in October.”

CSU takes on Air Force on Friday at 7 p.m. and Colorado College on Sunday at 1:30 p.m. The Rams return to the CSU Soccer Field next Friday at 4 p.m. for a showdown versus San Jose State.