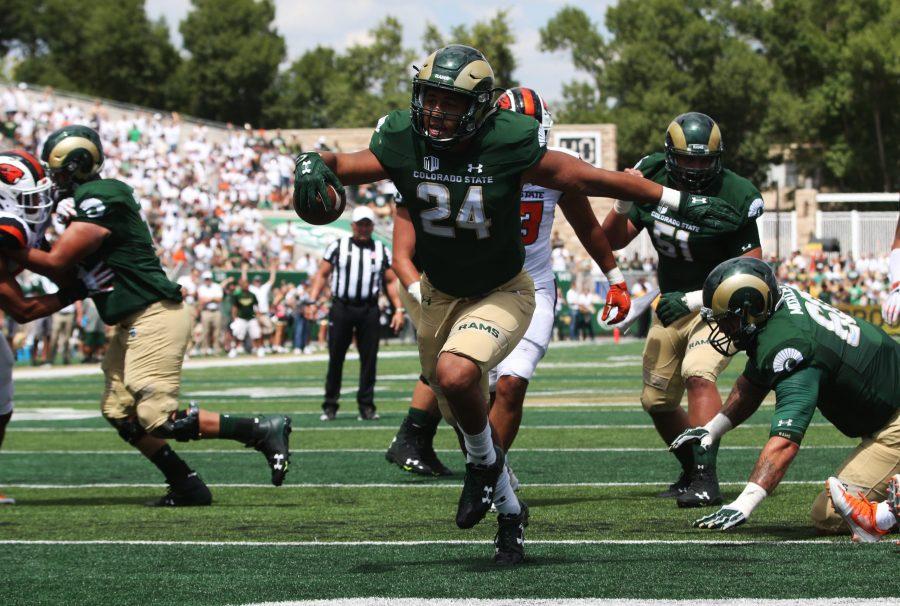 Heading into week 3 of the 2017 season, the Colorado State football team is looking to establish a more consistent run-game to match its potent passing offense.

After leaning on the arm of quarterback Nick Stevens against Oregon State and Colorado, CSU football head coach Mike Bobo has emphasized the importance of bringing a more balanced attack as the team moves forward.

Coming off a less than stellar offensive output in last Friday’s matchup with CU, the Rams will have the opportunity to work out some kinks in their rushing offense against Abilene Christian on Saturday, before traveling to Tuscaloosa for the final non-conference game of 2017 against Alabama on Sept. 16.

While the Wildcats are an FCS program, nobody is taking them lightly. ACU has a roster littered with Division I transfers and a ton of speed on both sides of the ball. After an impressive effort against New Mexico in week 1, the Wildcats will provide a solid test for a CSU offensive unit that is still discovering its identity.

“Our opponent does not matter, we are going to gameplan the same way,” head coach Mike Bobo told the media Tuesday. “We are not at a point where we can just show up, throw our helmets on the field and say, ‘Hey we’re going to win.’ This is a tough football team…We are probably coaching as hard as we’ve coached all year.”

Bobo and the Rams are not letting their guard down when it comes to facing ACU on Saturday, but this is very much a game that the team expects to win. Beyond the obvious goal of scoring more points than the opponent, one of the goals for Saturday will be bringing more balance to the offense.

CSU has seen consistent success through the air this season, gaining over 300 yards passing in each of the first two games.

The ground game has been a different story, as the team’s leading rusher Dalyn Dawkins (119 yards) is averaging 3.8 yards per carry. Behind Dawkins is junior running back Izzy Matthews, who has carried the ball 19 times for 64 yards (3.1 YPC).

Realistically they will not be able to rely solely on the passing attack this season. For the betterment of the offense, establishing a consistent ground game will be crucial. When the offense was performing at its highest level in 2016, CSU was dominant through the air, but they were also able to pound the rock on a consistent basis.

“I’d still like to become more balanced,” Bobo said. “We cannot throw it 47 times and expect to win the ballgame. It’s not going to happen.”

According to Bobo, there are a variety of reasons the Rams have not been able to run the ball at the same success rate as 2016. Instability on the offensive line has been a big part of the problem, but Bobo believes the running backs might also be trying to do a little bit too much.

“Around here we’re used to seeing huge holes when guys are running the ball well. Especially at the end of last year,” Bobo said. “Sometimes you gotta get up in there and get three, four, five yards and just continue to do that. I think we’re looking for the big play a little bit too much at running back.”

Having a strong running game to lean on is beneficial for the sake of variety within the offense, but it is also a huge factor in wearing down opponents in the second half. There were glimpses of this in the 58-27 victory over OSU on Aug. 26, when the Rams totaled 31 first downs in the game and scored 34 points in the second half alone.

“In the first week I thought we showed a lot of toughness to be able to play for four quarters and close to 80 snaps,” Bobo said. “I think we have some tough guys mentally that got a lot of experience during this second week.”

Despite not executing at the highest level through two weeks, the players believe that the running game will be just fine. Following Tuesday’s practice, Matthews explained that the Rams have always thrown the ball frequently in the early portions of the season, but over time the rushing offense will naturally work its way into a rhythm.

With talented rushers like Dawkins and himself leading the way, as well as young bucks like Marvin Kinsey Jr. and Rashaad Boddie in the mix, Matthews believes this team is in a position to consistently wear down opponents on the ground all season.

“As a coaching staff they know who they have at running back and they do not really need to worry about developing them,” Matthews said. “Right now we have kind of been trying to find guys outside of Mike (Gallup) and Bisi (Johnson) on the side that can consistently make plays.”

Matthews also explained that while the team has been working on establishing a rhythm through the air and identifying playmakers on the outside in the early portion of the season, he knows that the team will need to rely on the rushing unit for consistent success down the stretch.

Confident in the versatility and talent of the players in his meeting room, Matthews believes that their work ethic and experience will be the biggest benefactor for the success of the offense. Having had three years to grow in the system, there is not an aspect of the offense that No. 24 is not comfortable handling.

Dawkins and Matthews often get grouped into certain categories like “power back” or “speed back”, but Matthews believes those labelings are not accurate of their true abilities. In fact, he very much believes that he and Dawkins are capable of bringing the fight to the defense, no matter the down, distance or situation.

“I’ve always wanted Dalyn and I to be able to do the same things,” Matthews said.

The backs obviously will work in certain packages that favor their strengths or plays on a defensive weakness. These packages are evident when Dawkins lines up out wide or when Matthews lines up at fullback, but that does not mean they can only be used in specialty situations.

“As far as our role in the offense goes, which is being playmakers and true running backs, I feel we can do the same things,” Matthews said.

Ultimately getting the two-headed rushing attack of Dawkins and Matthews more involved will be crucial to the success of the offense this season. But if the Rams have to continue letting Stevens shoulder the weight offensively, Mathews says that he will be right there to do his part and lend a helping hand.

“We set a standard for ourselves that we believe is higher than everyone else’s on the team,” Matthews said. “If I only have four rushes in a game, I will not care if we get the win. If Dawk has four rushes in the game, he’s not really tripping about it. For us it’s not about the stats, it’s about doing whatever we can for our team.”

The Rams will once again look to test their offense against ACU on Saturday. The game is scheduled for 1:30 p.m. at the on-campus stadium.