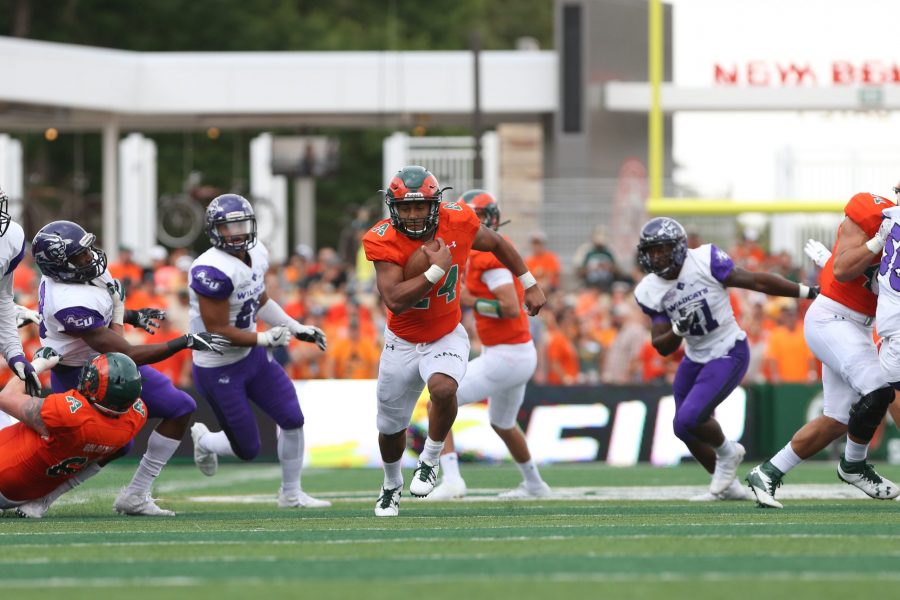 Running Back Izzy Matthews finds the hole in the Abilene Christian Defense on Sept 8. The Rams are ahead of the Wildcats 31-10 at the end of the third. (Elliott Jerge | Collegian)

In a game where the Rams amassed 605 total yards on offense, the most in head coach Mike Bobo’s time at CSU, the 38 points are certainly lower than what the team could have produced. After scoring with ease on the opening drive, the offense seemed likely to do the same its next time out before being stopped on a goal-to-go situation. Although they did convert a field goal, a touchdown was well within reach.

On the next drive, CSU was stopped on fourth down in ACU territory to squander another early scoring chance. Finally, looking to go up by four scores right before halftime, running back Dalyn Dawkins coughed up the ball on the Wildcats’ five-yard line. Again, a promising drive came up empty.

Despite the final score, running back Izzy Matthews understands that the offense also left plenty of points on the field.

After ACU returned a blocked punt to start the third quarter, the Rams held just a 10-point lead despite leading in nearly every statistical category. Two offensive possessions later, a Nick Stevens’ pass was intercepted in ACU territory. At that point, a game that CSU had clearly outplayed its opponent looked to be turning in ACU’s favor.

However, the offense began to do something it was unable to in the first half: finish drives. Stevens capped off the ensuing possession with a 19-yard touchdown pass to Detrich Clark. On the next drive, running back Izzy Matthews caught a check down from Stevens and took it 22 yards for another score.

For Stevens, the ability to overcome issues like turnovers or penalties and begin finishing those promising drives was key for the team’s ability to settle in.

“Coach was telling us we were driving up and down the field, we just need to finish,” Stevens said. “I think the offense did a great job all day moving the ball. There were a couple of drives where we went flat, but we did a good job of overcoming and that created momentum for the entire team.”

Though Stevens finished with at least 300 yards passing for the third consecutive game to start the season, the rushing attack added that second dimension to the offense that was lacking last week. In the days leading up to the game players and coaches stressed the importance of bringing a balanced rushing attack. CSU accomplished that on Saturday afternoon.

In total, the Rams rushed for 268 yards on 38 attempts for a robust 7.1 yards per attempt. Matthews led the way with 89 yards while Dalyn Dawkins added 73 of his own. All in all, five running backs recorded a carry in the game, including freshman Marcus McElroy, who recorded his first collegiate carry.

The competition between the backs has only pushed them to better each other to this point in the season.

“What’s great about our competition is it’s not who’s going to be the starter, it’s who can be pushed to be the best person in the room,” Matthews said. “I think that’s what is really special about us. We’re all brothers, we all love each other, we’re all out there competing our tails off. But at the end of the day, we’re all just trying to win games.”

The Rams will look to carry the offensive momentum into Tuscaloosa where they will face No. 1 Alabama on Sept. 16.