Breana Runnels: The emergence of a redshirt star 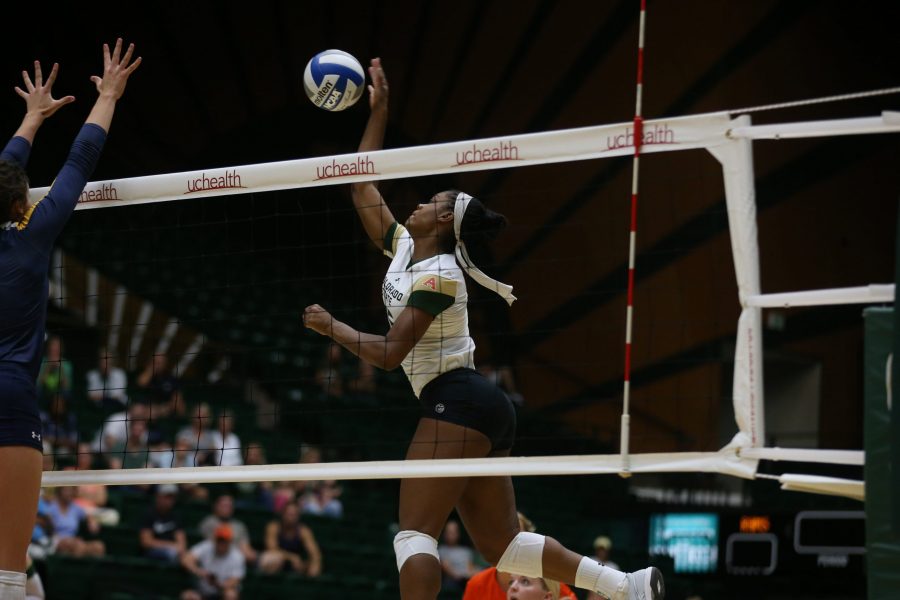 Colorado State Freshman Breana Runnels sends a ball over the net during the first set of action the University of Northern Colorado. The Rams defeated the Bears in three sets on August 29, 2017. (Elliott Jerge | Collegian)

Though normally disallowed by law, killing is the path to greatness for Colorado State volleyball’s redshirt freshman Breana Runnels.

Runnels spent last year dressing and traveling to every game, without the thrill of seeing the court and helping her team win. Hard work propelled Runnels to take a turn in October of last year and become a glimmer in the eye of coach Tom Hilbert. Hilbert knew Runnels was turning a corner and becoming a more consistent hitter that would assist the Rams success in her future at CSU. Despite the skill shown, Hilbert resisted his urges and stuck to his plan to leave her off the court to develop.

Being redshirted is an experience that requires a player to immerse themselves in the process and work hard for the future, not necessarily the present. Being surrounded by a culture of success and hard work has enabled Runnels and teammate Kirstie Hillyer to create a redshirt attacking force along the net.

“Last year I was fully involved,” Runnels said. “It was a growth period for me. I knew I was not going to play, it was just a work in progress situation for me. I’m still learning.”

A young player gifted with an older leader, Runnels follows senior Jasmine Hanna’s lessons to a tee. Hanna leads by example and takes every piece of the process seriously as she methodically attempts to perfect her game. Runnels admires Hanna’s game and has shaped hers to match. When Runnels is on her game though, Hilbert thinks she goes above and beyond.

“When she is on, she is the best outside hitter on our team,” Hilbert said. “In the spring, she played all the time and she will probably be a four-year starter as long as she stays healthy.”

Runnels has elevated herself and catapulted the Rams to a hitting force, combining the likes of Hanna and herself to create a duo that pushes each other to better their skills. As well as constantly competing with Hanna, Runnels has soaked up every piece of knowledge that Hanna has to offer.

“(Jasmine Hanna) is just a smart player,” Runnels said. “She has intentions with every move she does and I definitely want to be that way. I think she definitely has had the biggest impact on me, but everyone is still teaching me stuff every day.”

Facing a separate and more tedious challenge, Runnels has embraced the task of developing chemistry with setter Katie Oleksak that has spread their relationship beyond the realm of the volleyball court.  Their friendship off the court has only enhanced the chemistry on it. Runnels was a recipient of the setting of coach Luke Murray during her redshirt season, which helped her improve her skills, but lacked the bond building with her future setter.

“(Katie and I) are still working through things,” Runnels said. “We definitely have chemistry off the court and for that to transfer on the court will be amazing when it is time.”

A quiet persona allows Runnels to lead by example and still have her impact felt throughout the team. With every kill, Runnels deepens the trust of her teammates and the admiration of her talents. While vocalized leadership is not the path to glory for Runnels, superior play and work ethic are the key to her being the driving force of the Rams.

Currently residing at second in total kills for the Rams (68) and leading in total attacks, Runnels is showing the trust Hilbert has in his star outside hitter, and the success he believes they will have when running the offense through her. Runnels has slowly bolted herself to the head of opposing teams’ watch lists when game planning for the Rams.

Her skills add to an already impressive arsenal coach Hilbert possesses in Hillyer, Hanna and Sanja Cizmic. Once the Rams get senior Alexandra Poletto back, oppositions will have to make a choice: defend the rockets coming from Hanna and Runnels on the outside, or clog the middle and stop Hillyer and Poletto.

The emergence of Runnels further projects the greatness of coach Hilbert and the impact he has on the program’s recruitment and development of young players. Hilbert has developed a knack for redshirting players and allowing them to develop while the talent ahead of them excels, as most recently evidenced in the growth of Runnels and Hillyer.

“(I just want to) continue to grow,” Runnels said. “We all need to keep ourselves to a high standard every year. Win the big games when we can and never let a petty loss get to us.”

The Rams suffered their first “petty loss” to Duke and have embraced Runnels’ mentality by not letting it define them as they have a perfect record since. The Rams have several big games the rest of the season and will need to embrace that same attitude under pressure to succeed.

Meanwhile, Runnels will continue her own personal goal of being a silent but deadly outside hitter, creating momentum with every swing.