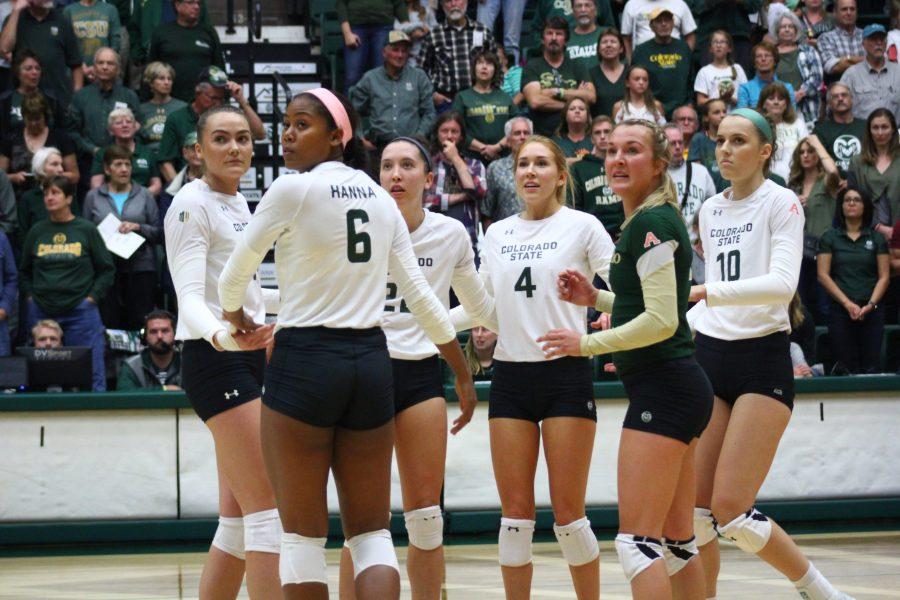 The CSU rams volleyball team glare at the official to await his decision on who would receive a point during the September 16, 2017 game. (Matt Begeman | Collegian)

After wrapping up non-conference play last weekend, Colorado State volleyball will open up Mountain West play on Thursday when they host the University of New Mexico.

The Rams were once again picked as the favorite to win the conference, voted on by the coaches in the Mountain West. The title is the 10th time the Rams have been tabbed as the favorites as they received eight first-place votes and totaled 98 points in the poll. Of the 18 seasons that the Mountain West has included volleyball as a Division I sport, CSU has won the conference title 13 times.

Last season brought some change, however, as Boise State took home the title. Boise State will be looking to make the same sort of splash as they return the 2016 Mountain West Player of the Year in Sierra Nobley. So far this year, Nobley is hitting at a .304 mark and averages almost five kills per set. Last year, Nobley put up 21 kills on the Rams in their five-set victory that essentially clinched the Mountain West title.

The Broncos enter conference play with a 7-5 record that is actually highlighted by a loss. Last week, the Broncos hosted the No. 1 Minnesota Golden Gophers and held a 2-1 set lead during the match. Minnesota went on to take the final two frames, but the Broncos were close to pulling off the upset and showed that they can play against anyone.

The Border War against the Wyoming Cowgirls will also be an intriguing matchup for the Rams. Wyoming was one of the Rams’ three losses last season and the Cowgirls were picked to finish fourth in the preseason poll.

Luckily for the Rams, Wyoming’s Laura Beach graduated after last season so her 13-kill, 8-block performance will not happen again. The Rams still had 16 blocks in their loss to Wyoming last season and senior Jasmine Hanna and Sanja Cizmic had revenge later in the season when they had 20 and 27 kills respectively against the Cowgirls.

Cizmic comes into Mountain West play two weeks removed from being named the AVCA Player of the Week. She also recorded a 21-kill performance against Xavier last week. Hanna and sophomore Breana Runnels are also leading the way on offense as the duo lead the Rams in kills.

CSU will have the best record coming into conference play at 10-2. They picked up two sweeping victories over ranked opponents, the current No. 20 Michigan Wolverines and No. 19 Florida State Seminoles.

Questions still surround the Rams’ health entering conference play as reigning Mountain West Newcomer of the Year Kirstie Hillyer has missed two weeks due to a knee injury. The redshirt sophomore is the Rams’ leader in blocking and her 6-foot-6 frame was missing in their loss to the strong middle blockers of Colorado last Saturday.

Sophomore Paulina Hougaard-Jensen has stepped up in Hillyer’s absence as she now leads the Rams in blocks with 48 to go along with 83 kills. She is hitting at a .460 mark, one of the highest in the entire country.

Mountain West foe UNLV owned one of the highest RPI’s last year as the Rebels were one of three Mountain West teams to qualify for the NCAA tournament. A big drop off is expected for UNLV however as they had many seniors graduate and were picked to finish seventh in conference.

The San Diego State Aztecs made a climb in the preseason poll to third place. They enter conference play with a 6-7 record that includes losses to two ranked teams at the time of playing them, Michigan State and San Diego.

Aztecs’ junior Deja Harris was the only player to be named to the preseason All-Mountain West team that is not on CSU or Boise State. She leads her team in kills with 145 and is hitting at an unprecedented .409 clip.

The Rams’ other conference loss from last season came on the road against the San Jose State Spartans. SJSU will have the second best mark ahead of conference play at 8-3. The Spartans will enter MW play looking to finish higher than their preseason selection of eighth.

An intriguing streak to keep an eye on is the matchups between Air Force and CSU. The Rams are currently riding a 46-game win streak against the Falcons. Air Force has only beaten the Rams once in the team’s history, coming in the first match all the way back in 1982.

CSU will begin its quest to retake the Mountain West crown later this week when they welcome New Mexico into Moby Arena Thursday at 7 p.m.