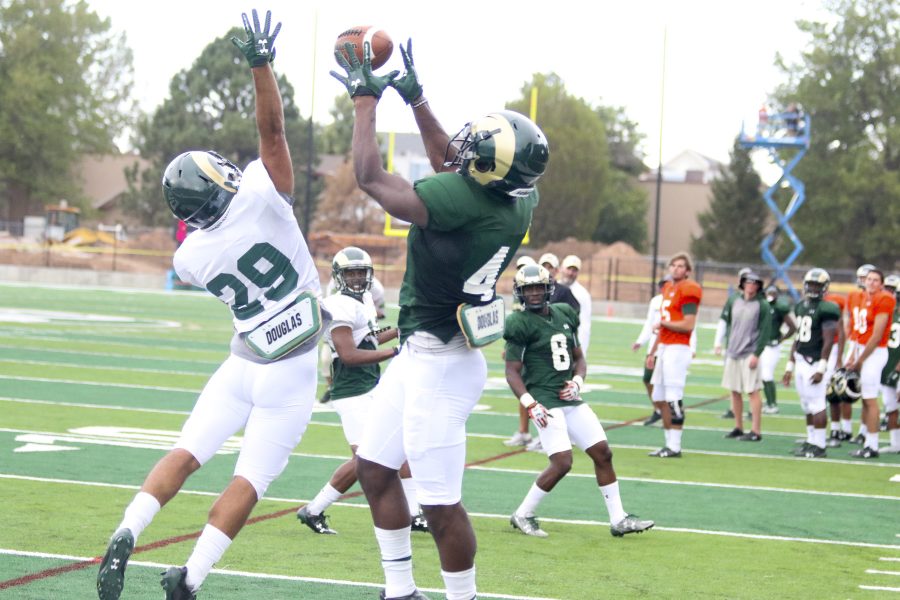 Senior Wideout Michael Gallup (4) makes a spectacular catch at the goaline during one of the CSU Football drills on August 1st at the new CSU stadium practice field. (Javon Harris | Collegian)

CSU releases its first depth chart of the season. Lots of fluidity on the offensive line pic.twitter.com/ne7pvVJgET

One of the most unsettled position groups on the depth chart is the offensive line. After losing three starters from last season, the position naturally figured to have some question marks. While returning starters Zack Golditch and Jake Bennett came into fall camp as presumed starters, others around them were less proven.

Bennett and junior Nicho Garcia are locked in as the starting center and right guard, respectively. Golditch and Moxley both figure to play, but where that will be is not final.

“We’ve got a pretty good idea, but we’ve got to figure out who we’re going to start at tackle and where Trae Moxley fits into that rotation,” Bobo said. “So there’s a lot of different scenarios there which it could be, and we’re probably going to see all of those scenarios within a game. Early on I think it’s good to play guys and mix and match. You never can get a true test until you play in a game.”

Another position group that presents uncertainty is the secondary. The depth chart reflects the number of options in the defensive backfield, but the unit still has plenty to prove this season.

Jamal Hicks and Jordan Fogal, not Jake Schlager, will be the team’s starting safeties come Saturday. Schlager was the team’s third-leading tackler last season, giving reason to believe a rotation might be in place. Bobo did comment on Fogal’s success, praising the Utah transfer for his ability to step into a leadership role.

At cornerback, Kevin Nutt and Anthony Hawkins will start the season on top of the depth chart. Bobo also listed Nutt, Justin Sweet and Darius Campbell as possible players for the nickel position when the team decides to deploy five defensive backs in coverage situations.

Hawkins transitioned to the cornerback position during the spring after playing wide receiver during his freshman season. Despite having such little experience at the position, Bobo has noticed Hawkins’ comfort level increasing throughout fall camp.

Regardless of who the starters will be, Bobo and his team understand the magnitude of opening the college football season at the new stadium. During the team’s last practice of fall camp on Saturday night, CSU held the first ever Rambunctious Pep Rally at the stadium. Though it was only 7,000 students, the players noticed the different atmosphere in the stadium.

“That was my message to them after practice on Saturday night, I said ‘this is just 7,000 students,’” Bobo said. “Imagine when there’s close to 40,000 people here and what it’s going to feel like…It’s going to be a special, special moment in Colorado State history. We just need to be ready for that moment.”