No. 7 looking to work on consistency and tempo in Saturday’s scrimmage 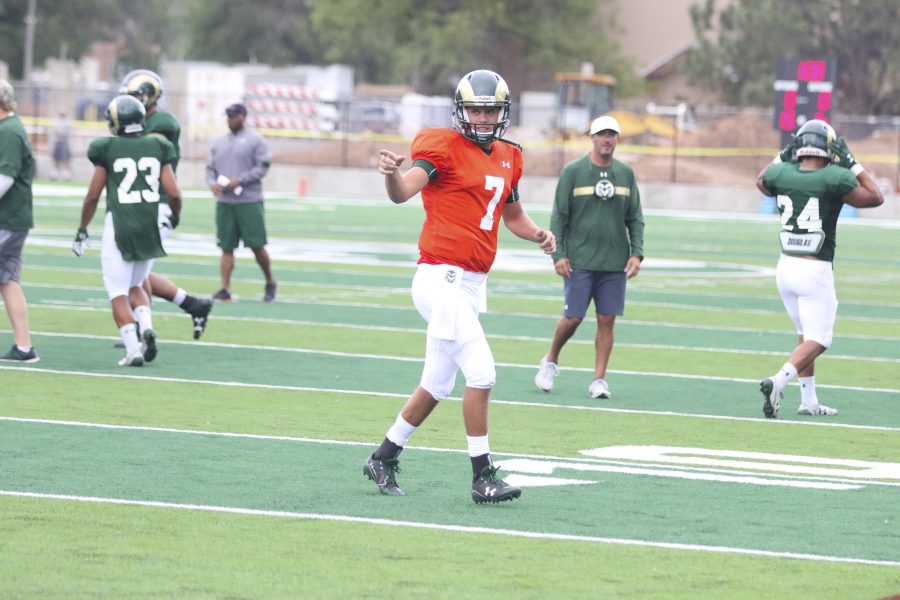 Senior Quarterback Nick Stevens (7) points at Michael Gallup after Gallup makes a consecutive catch from Stevens during one of the CSU Football drills on August 1st at the new CSU stadium practice field. (Javon Harris | Collegian)

Colorado State quarterback Nick Stevens is no stranger to the spotlight. Having competed for the starting job and ultimately securing the spot in each of the last two seasons, addressing the media is no big deal for the California native.

That being said, one could only imagine that constantly having to defend your stance would grow old for anyone. If it has for Stevens, he does not show it. Stevens sat through a barrage of interviews at the Mountain West media days last week in Las Vegas, before doing the same on Tuesday with CSU football’s annual media day.

So when Stevens addressed local reporters after Thursday’s practice and handled the situation with the same poise and respect that he has for the last three years, it was obvious just how mature the fifth-year senior is.

Heading into Saturday’s scrimmage, Stevens knows what it expected of himself and the offense.  After getting off to a fast start to open fall camp, Stevens wants to continue attacking the defense this Saturday and work on establishing consistency within the unit.

He explained that the offense has a goal of hitting 16 big plays during any given practice and if they do, it will roughly translate to about eight big plays in a game scenario. So far, the Rams offense has done a good job at consistently hitting that mark, so Stevens want to continue executing at a high rate this weekend.

Throughout the first week of fall camp, one of the biggest goals has been establishing consistency and learning how to compete for four quarters. CSU outscored opponents 131-71 in the first quarter and 108-89 in the fourth quarter, but the Rams were outscored 233-220 in the quarters in between in 2016.

Saturday’s scrimmage will be the first trust test to see where the Rams are at as a team. CSU is expected to play roughly one half of football or 50 snaps with the first unite Saturday and about 110 snaps total. While the offense will face the defense in 11-on-11 situations, some of the scrimmage will be controlled scenarios like red zone situations.

What is Stevens looking to gain from the first scrimmage of fall? Along with improving his chemistry with some of the younger guys on the squad, Stevens is looking to limit turnovers, finish the day with a high completion percentage and push the tempo.

“I do not know exactly what situations we are going to do, but anytime we are moving the ball, we need to be able to convert on possession downs and puts points on the board,” Stevens said. “I think we should be able to do that, especially with the explosiveness and potential that we’ve seen from a lot of the guys.”

The intrasquad scrimmage will be open to the public Saturday, as part of CSU Athletics’ open house event for season ticket holders and members of the Fort Collins community. Normally the first scrimmage of the fall season would be closed to the public, but the football program wanted to give the fans an opportunity to experience the new facilities prior to the week 1 matchup with Oregon State.

Even so, Stevens is not worried about the fans being a distraction though. He explained that between spring ball and events for the new stadium, there have constantly been people around for months, so the guys are more than used to working in front of a crowd. If anything, having the fans there will make the scrimmage feel more like a gameday atmosphere.

“There should be a lot of excitement,” Stevens said. “It will definitely give you a little bit of a buzz. The first open event in the new stadium,  we’re excited to finally go out and play live.”

CSU football will hold its first scrimmage Saturday and will holds two two more prior to Aug. 26. The Rams open the season against the Beavers, before facing Colorado, Abilene Christian and Alabama in the rest of their non-conference schedule.