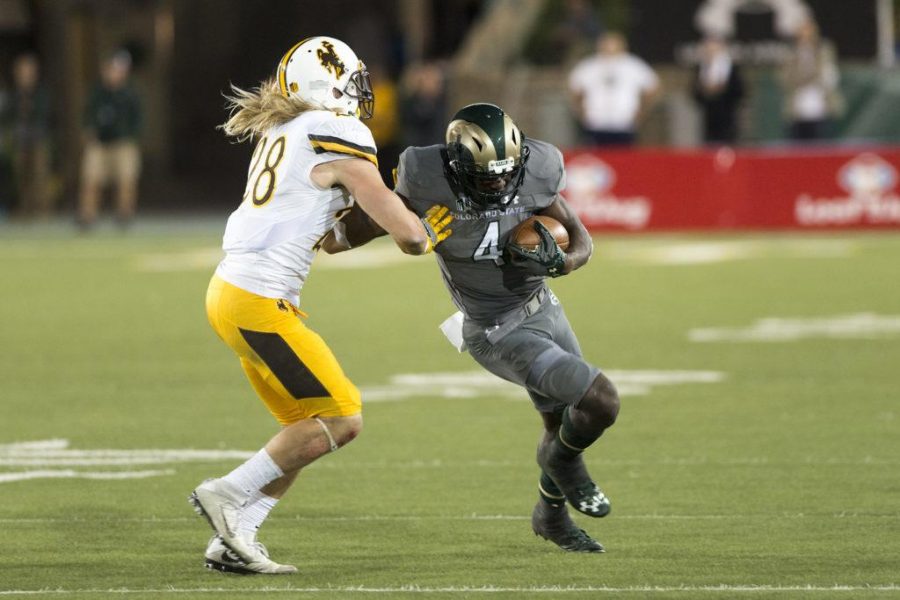 The shortest distance between two points is a straight line.

This is a completely foreign concept to Michael Gallup, whose path to becoming a star receiver has been filled with twists and turns.

Gallup went from being indecisive on what college sport to pursue to being unsure about which football position suited him best. Not to mention, the CSU wide receiver endured a rigorous battle with academics in order to even have an opportunity to play collegiately.

Nevertheless, there haven’t been many CSU players in recent memory to exercise as impactful a first season as Gallup did in 2016.

In comparison, key offensive weapons such as Dalyn Dawkins and Olabisi Johnson didn’t make their presence known until their second seasons as Rams. While that definitely can be situational, it goes without saying that Gallup exceeded expectations during his first season with CSU.

Gallup made 76 catches for 1,272 yards last season, both of which ranked second among all Mountain West receivers. Gallup’s 14 trips to the end zone in 2016 were also tied for first among all receivers in the conference. Gallup’s athleticism and endurance on the field were major contributors to the effective first year in Fort Collins.

“He is in great condition,” quarterback Nick Stevens said. “He makes plays late in the fourth quarter where he should be tired and he is still running by guys.”

While it comes as no surprise that a D I football player is in excellent condition, the quantity and variety of conditioning Gallup experienced in high school is more than most players receive.

“In track I ran the 4×4 and I did the 4×1 and the high jump,” Gallup said. “In baseball I played center field. In basketball most of the time point guard though because we didn’t have anyone who wanted to bring the ball up.”

Balancing four sports can get hectic at times, but Gallup never got overwhelmed by the amount on his plate.

“The reason he did all of these four sports was because he didn’t pressure himself,” Gallup’s high school football coach Matt Fligg said. “He was kind of nonchalant. When football was over he played basketball. When baseball was over he went to track practice. He never said ‘I’m tired, I can’t do this.’ He just took an attitude like I can do this, I’m not sweating it. He just took the right attitude in playing all of these sports.”

Although Gallup handled the workload of four high school sports effortlessly, he believes that being able to specialize in one sport in college has greatly benefited his football career.

“Doing all of those sports together and then coming out here and only doing football makes it easier to focus,” Gallup said. “I think it has helped me transition a little bit. It keeps your head focused on one thing instead of doing a bunch of things.”

Even though Gallup may have just been playing some of the other sports for fun, he excelled in all four. In fact, Gallup earned an astonishing 16 varsity letters in high school, four from each sport.

For all of his college football success, there was a time that Gallup had aspirations to specialize in a different sport altogether.

After his sophomore year in high school, Gallup shifted his top priority from basketball to football. Once Gallup realized he had more big-play potential and explosiveness on a football field rather than a basketball court, basketball became a side interest as well.

“I think once he got on the basketball court after playing football he kind of got behind a little bit over time,” Fligg said. “And he was a lot better in football than he was in basketball.”

Even then, Gallup was gunning to play a position other than wide receiver in college.

“For a while I played quarterback,” Gallup said. “We ran the triple option. Our other quarterbacks were running quarterbacks. I was the only one who had to throw the ball. I had some catches every now and then, maybe two or three each game. But, I wasn’t mainly a wide receiver for a while.”

“Michael (Gallup) and our other quarterback Stanton Truitt became really good friends,” Fligg said. “They eventually became a 1-2 punch. I think the friendship they had together sold him into playing wide receiver. He realized his stardom and how he could get a scholarship and how he could get his name in the paper, it was by playing wide receiver.”

Gallup’s career as a wide receiver took off from there. All of his cards were in place and he began to find his niche. Finally his path appeared to have formed into a straight line.

“He (Gallup) caught around 95 percent of our passes during his senior year,” Trigg said. “Anytime they played press coverage, we’d check off and run a fade route. People played zone at the goal line because they knew Michael would beat them and out jump them on the fade or he would cut and beat them on the post.”

Gallup’s senior season caught the attention of many D I programs. Gallup held offers from a number of schools including Kentucky, North Carolina State and Missouri. Unfortunately for Gallup, his grades throughout high school created another obstacle.

“I didn’t have the best grades out of high school,” Gallup said. “I didn’t do too well with the SAT and a lot of schools wanted that.”

Consequently, instead of inking a commitment to a major program, Gallup chose the junior college route. He spent two years playing football for Butler County Community College from 2014-2015.

While going to Butler delayed Gallup from a timely trip to the D I level, it may have been a blessing in disguise.

“Personally I think it really helped me,” Gallup said. “If I were to have went D I out of high school, I wouldn’t have lasted. I didn’t have it in my head. I had to get way more mature.”

“It gave him a little bit better of a sense of what to expect when he walked in the door,” Bobo said. “A high school kid has not been through a college schedule of class and football and managing your time, where a junior college guy has. They learn how to struggle and how to fight on their own a little bit more. It helps them mature a lot faster.”

Teammates see maturity in Gallup that comes across as though he has seen it all and isn’t fazed by anything. Been there, done that.

“He’s (Gallup) the same as he is at practice as he is on game day,” Dawkins said. “He’s not uptight or anything. You can tell he always is relaxed. It makes a lot of sense that he played four sports. You can never tell that he’s tired. He’s good at handling a lot.”

Gallup is a focused player who keeps his eyes on the prize. Individual goals. Team goals. All for one, and one for all.

“We give advice to each other all the time,” fellow wide receiver Olabisi Johnson said. “Specifically in our route running, if Mike (Gallup) breaks down or doesn’t use his arms or something like that, I’ll tell him. Or he’ll give me pointers on just running by a guy, just because he has that flat out speed. I’ll run by a guy and he’ll tell me whether I’m doing it right or not.”

The exceptional chemistry between Gallup and his teammates is nothing new. This isn’t something that just started for Gallup at CSU. It began way back in high school.

“Michael was looked up to more than other player I had,” Fligg said. “It’s because he wasn’t a cocky kid. He practiced hard. He wasn’t arrogant. His best friend was a third string wide receiver that didn’t play much. The teachers loved him. He just got along with everybody.”

CSU returns nearly all of its vital offensive weapons from a 2016 season in which the Rams had little trouble moving the ball. With his final season in a Colorado State uniform about to commence, Gallup is poised to build off of last season. Though improving statistically may be a goal, Gallup is more focused on the Rams getting better as a team.

As far as winning that Mountain West championship, Stevens to Gallup is a pretty straightforward path to success.

“We talk a ton out there,” Stevens said. “He (Gallup) absolutely makes my job easier. It’s every quarterback’s dream to have a guy like Mike, somebody who can beat a defensive back with speed. If he gets one-on-ones, he is going to win.”

The shortest distance between Stevens and a completed pass is a straight line to Gallup. No more twists and turns.