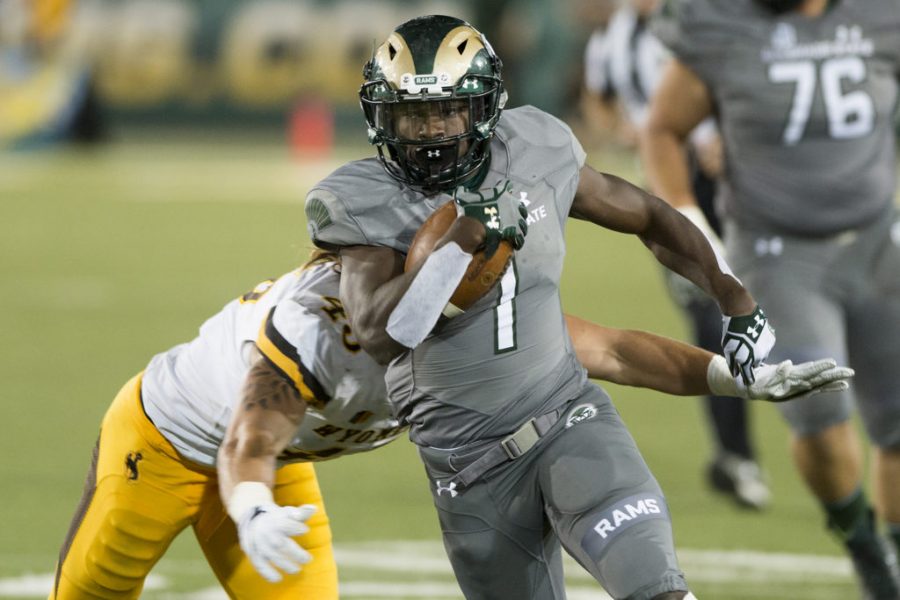 CSU running back Dalyn Dawkins (1) breaks past a defender at Hughes Stadium during the boarder war against Wyoming. CSU lost 38-17 on October 1st, 2016 (Luke Walker | Collegian).

Coming off a successful season on the ground, Colorado State’s rushing attack is back in full force for the 2017 season.

Dalyn Dawkins, Izzy Matthews and Marvin Kinsey Jr. are all looking to keep things rolling after successful 2016 campaigns. The three backs were the Rams’ leading rushers and combined to gain 2,199 yards on the ground.

Dawkins led the way with 919 yards on 161 carries. The running back’s total rushing yardage was good for ninth best in the Mountain West. Matthews also had an extremely successful sophomore campaign, rushing for 739 yards and a team-leading 13 touchdowns on the ground. Kinsey Jr. also contributed significantly, running for 546 yards on only 93 carries. The true freshman’s 5.9 yards per carry were the most by any CSU player last season.

Despite the successful seasons from all three, none of the running backs plan on having last season be their best as a Ram. Dawkins is just one of the three who has ambitious goals for the upcoming season.

“Getting 1,000 yards and even more is the goal,” Dawkins said. “I just want to be able to run the ball on anybody, on any down. Even when they know it’s coming.”

Head coach Mike Bobo believes the relationships the running backs have built with each other has been a major reason for the success.

Overall, the Rams rushed for 2,831 yards last season, the fourth highest team total since 2000. The trio of Dawkins, Matthews and Kinsey led CSU to the 27th highest total rushing total out of 128 FBS programs. Each also finished within the top 22 rushers in the Mountain West last season. With the success of all three, there is competition between the running backs. However, the competition has impacted the team and each individual positively.

“We understand that at practice we’re competing for reps but at the same time we’re brothers and family,” Matthews said. “If Kinsey does something wrong I’m going to help him out. Yeah, he might come take my job. But, we all care about the team because we’ve been here building it together.”

While the Rams’ running back core helps CSU during games, they also have taken it upon themselves to be leaders during practice.

“Over the last three years we’ve gained a lot of respect from the other players and an understanding of how we practice and the standard we hold ourselves to,” Matthews said. “I think it really pushed other players to want to hold themselves to that standard. When they see how hard we’re going they want to jump in on it. It just makes the whole team better as a whole.”

In addition to CSU’s three-headed monster of Dawkins, Matthews and Kinsey Jr., redshirt freshman Rashaad Boddie has made significant strides during the offseason as well.

“I think everything slowed down for him a bit, what we are doing schematically,” Bobo said. “He’s changed his body. He’s changed the way he looks. He’s running faster.”

With Boddie now potentially in the mix for reps, the Rams have plenty of options at running back. Though distributing carries between the four may be difficult for Bobo, having a plethora of options is not a worry of his.

“I don’t think you can have enough backs in today’s game,” Bobo said. “We do play fast and we do put a lot of pressure on those guys to play in a hurry. I think it’s good for them that we play more guys.”