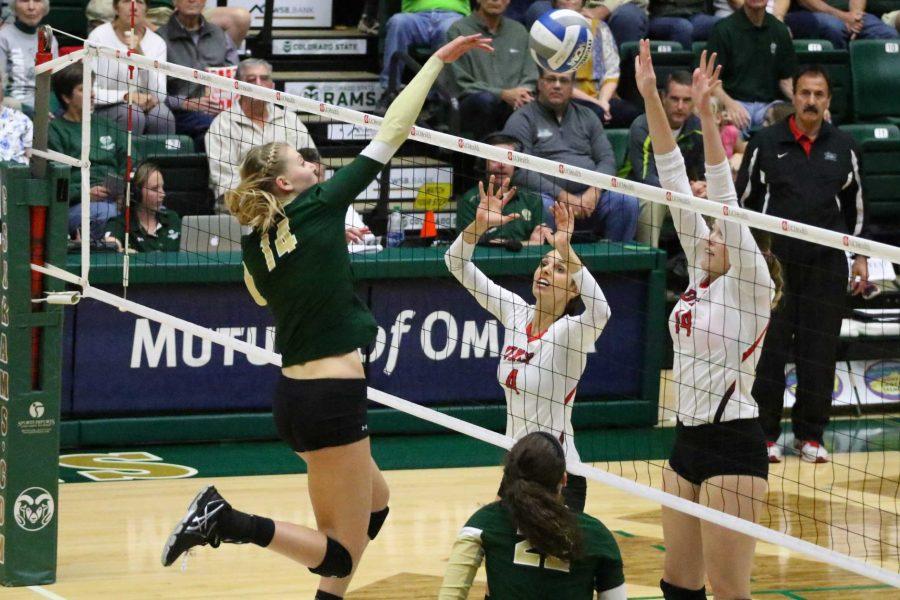 School is in session in the classroom and on the court this week as the Colorado State volleyball team will begin their 2017 season on Friday Aug. 25 at home against Duke. They follow that matchup with another home game against Central Florida on Saturday Aug. 26.

The Rams are returning almost every player from last year as they only lost one senior to graduation. However, the opening spot is at the libero position, one of the most important on the court given their leadership attributes.

Head coach Tom Hilbert said they have been considering seven different girls for the libero in his address at the team’s media day on Aug. 9. After Tuesday’s practice, he was ready to name a starter for the opening match.

“It’s going to be Amanda Young for probably this first weekend,” Hilbert said. “We will see how she performs and then go from there.”

The sophomore played in 29 matches last year and posted 1.31 digs per set including a season high 13 digs in the Rams’ first round loss to Kentucky in the NCAA Tournament. She also had a team best .962 receiving percentage.

Young will help lead the Rams who were voted as the Mountain West favorites to win the conference title by the MW coaches for a fourth consecutive year. They also placed four players on the preseason All-Mountain West team and received 55 points in the NCAA national coach’s poll.

The offensive presence is almost fully intact as the Rams return their top five players in kills from 2016. As a team, the Rams ranked third in the MW in kills and first in hitting percentage.

Those same heavy hitters at the net did their job defending as well as CSU led the conference in blocks a year ago. Sophomore Kirstie Hillyer led the team with 167 total blocks, followed by senior Alexandra Poletto and sophomore setter Katie Oleksak.

However, Poletto has not been able to practice yet this season as she is still recovering from a shoulder injury. Senior Sanja Cizmic also dealt with a pulled abdominal muscle at the beginning of the month, but Hilbert expects her to play all weekend.

Sophomore Jessica Jackson and freshman Jenna Heinemeyer are also injured after colliding in practice earlier this week. Both players have shown concussion like symptoms, but Hilbert expects them both to be ready for the weekend matches.

As for the opponent, the Blue Devils finished the 2016 season with the same record as the Rams at 21-9. Duke ultimately missed the NCAA Tournament though while CSU made its 22nd straight appearance.

The Blue Devils will attack CSU with junior middle blocker Leah Meyer who was named as a preseason All-ACC player. She finished her 2016 campaign with 316 kills (second most on the team) and 139 blocks (team high). Duke did lose a top attacker from last year, so finding a player to fill in behind Meyer will be an early season priority.

There are quite a few options though as Duke returns five players who hit over 100 kills last season. Four of those five players are non-seniors, speaking to the combination of youth and experience that Duke has.

Duke has many offensive options but the defense is where they shined bright last year as they led the ACC in digs per set with 18.31 per contest.

“The way you overcome (a good digging team) is just by patience,” Hilbert said. “Digs are like offensive rebounds, it gives your team another chance to score…you just have to continue to play through rallies until you get a kill.”

As for UCF, they will come to Fort Collins with two redshirt seniors on the squad who will look to carry a very young squad that has 11 underclassmen. Those two seniors will be the leading attackers come Saturday as Kia Bright was second on the team in kills in 2016 with 333 and fellow senior Taylor Wickey was fifth.

“Offensively I don’t know that we are going to be a team that’s going to depend on one or two people,” UCF head coach Todd Dagenais said. “I think we have to do a lot of very tactical type things to be able to go out on the floor and be successful and to be honest that has been the hallmark of our program over the last 10 years.”

UCF will also have a solid back court that is anchored by junior libero Jordan Pingel who hails from Air Academy High School in Colorado Springs, Colo. Pingel has recorded 1,098 digs in her first two seasons at UCF and is someone that Hilbert sees as one of the best liberoes in the country.

“Jordan is excited to go home and play in front of her family and friends,” Dagenais said. “She runs the back court, she’s like having a coach on the floor. She will go out there and stay within what she knows she is capable of doing, I don’t see her pressing in any way, shape or form.”

The first match of the season against Duke gets underway Friday at 6 p.m. and the Rams will have an encore performance Saturday night against UCF at 8 p.m.