CSU volleyball looking for answers before season opener against Duke 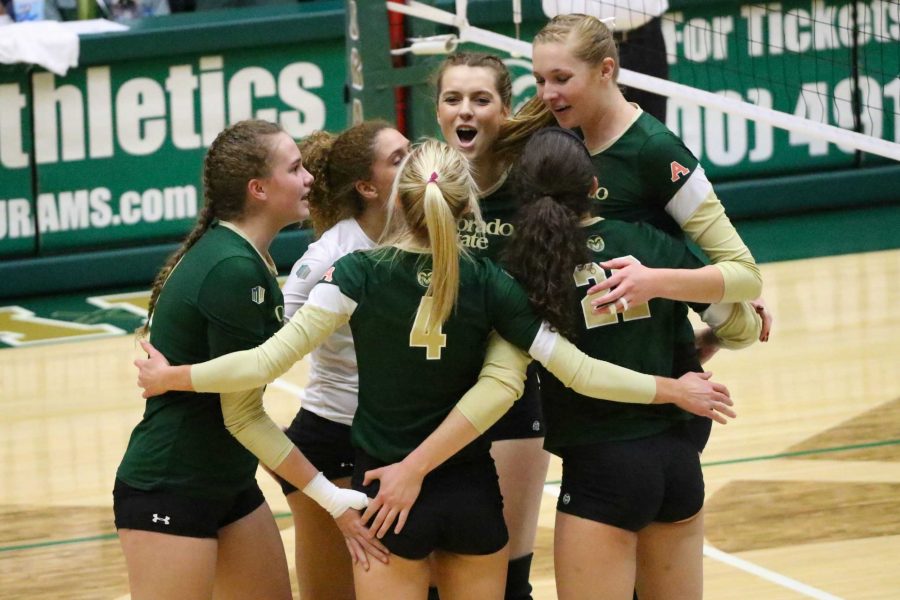 the team celebrates after a paint regaining momentum in the game against the Rebels.

The Colorado State volleyball team held an open practice and barbeque for the booster club and media on Tuesday. Head coach Tom Hilbert addressed the changes fans will see in game plans and the burning question of who will take over arguably the most important position on the court, the libero.

After a loss in the first round of the 2016 NCAA Tournament and a second place finish in the Mountain West, CSU volleyball looks to have an improved 2017 season.

The Rams ended 2016 with a loss in the first round to the Kentucky Wildcats (3-1) after taking the first set and losing the next three. They did however lose just one senior in Cassidy Denny, but her leadership role in the libero position is not easily replaceable.

In order to replace Denny, the team brought in three defensive specialist freshman and also have senior McKenna Thornlow, sophomore Amanda Young and redshirt junior Mariah Green all vying for the lead role.

Coach Hilbert also acknowledged that the Rams have lacked on defense in recent seasons. This offseason, the Rams have shifted their focus to protecting the court.

In addition to three new defensive specialists, the Rams look to stop teams by having sophomore setter Katie Oleksak shift more to the middle on defense to aid in blocking. She was the Mountain West Freshman of the Year last season and the best blocking setter in the entire country, based on blocks per game for setters. Oleksak is confident that she can continue to impress in 2017.

“I am down to try anything new, I think it is fun,” Oleksak said. “Anything that will help me become a more well-rounded player I think is good… I am not that great at it yet but hopefully I can improve and we will keep working on it.”

The help in the middle has been a theme for the Rams early in 2017 as injuries have limited some of their more experienced players. Senior Alexandra Poletto has not been participating in practice to shoulder injuries and fellow senior Sanja Cizmic has been relaxing on her swings after a pulled abdominal muscle occurred in the Mountain West All-Star game.

“We got a couple seniors who are not practicing full right now,” Hilbert said. “But everybody else is going hard and they are doing a nice job.”

The Rams have grown accustomed to playing some of the nation’s best in their early-season schedule, and 2017 is no different. CSU starts the year with a home match against the Duke Blue Devils who went 21-9 last season.

After Duke, the next couple of tests will come on the road in the Home2Suites Tallahassee Seminole Volleyball Invitational. CSU will start the tournament against Texas Christian University, a team who made it to the Round of 32 in the NCAA Tournament last season. The very next day, they will square off against the current No. 15 team in the nation in Florida State.

When the Rams return from the tournament, they face their fair share of difficult competition, highlighted by No. 16 Michigan. The ladies will finish up non-conference play hosting rival Colorado.

With most of the team returning this year, Hilbert hopes the Rams can use their tournament experience last season to navigate through the difficult schedule.

“I think it should help them a lot,” Hilbert said. “We even saw ourselves that it was a match we could win if we play at a really high level through the course of an entire match. Our team knows that physically we can compete with Kentucky, or Duke or Michigan. It’s really about can we handle the ball well enough to do it.”

The biggest question mark will be the libero position heading into the season and Hilbert hopes to have an answer by the end of training camp. Until then, the team is looking at the positives of having so many players able to rotate into the leadership spot.

“I think it is really good to have a lot of options, it really helps the competition in the gym,” Oleksak said. “We have six people who are really capable…it’s just the beginning of camp so things haven’t really rounded out who’s stood out that much, but I think it’s really good for them and the competition.”