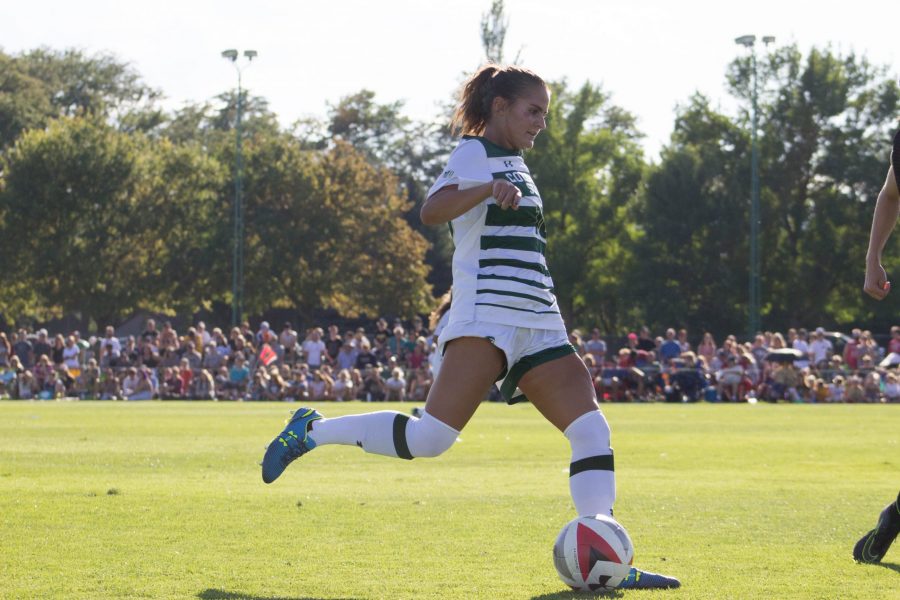 Senior midfielder, Maddi Rodriguez, kicks the ball away from a Buffs player during the home opening game on Friday, August 18. CSU and CU ended the game tied at zero. (@ashleypottsphoto | Collegian)

The Bears had a chance to get on the board early when a crossing pass landed in front of UNC’s leading scorer Gutierrez. CSU goaltender Paige Brandt stuffed Gutierrez’s shot, and on the ensuing corner kick it was CSU midfielder Alex Lanning who used her head to make a save on the goal line, 12 minutes into the match. Unfortunately for the Rams, Gutierrez’s night in the offensive zone was only getting started.

With the game still scoreless in the 27th minute, Gutierrez had enough space just outside the upper-right hand corner of the penalty area to send a shot over the left shoulder of the retreating CSU goaltender and into the back of the net.

“Their special player did what special players are supposed to do,” CSU coach Bill Hempen said after the game on Thursday. “That first goal was world class and she meant to do that.”

As the game neared half, the Rams turned up the pressure on Bears’ goaltender Madeline Burdick and the UNC back line. CSU racked up several corner kicks and shots on goal, but went into halftime still searching for their first goal of the season.

The Rams carried the momentum from the end of the first half into the second half, but couldn’t tie the game thanks to a diving save by Burdick on a Hannah Gerdin point-blank shot. In the 61st minute, UNC took back control of the game when Gutierrez was awarded a free kick from just outside the CSU penalty area. With Hunter Peifer in place of Brandt in the CSU net, Gutierrez snuck a shot over the CSU defensive wall and past a diving Peifer to the near post.

Down 2-0 late in the match, CSU continued attacking the UNC defensive zone until they were finally rewarded with a goal in the 82nd minute. On a play that began as a corner kick, CSU freshman Taylor Steinke, positioned in the right side of the goalie box, headed home a feed from Makenzi Taylor to put the Rams on the board. It was the first goal of the season for the Rams, but it didn’t come as a surprise based on the way they were playing.

“We came out with a lot more intensity and passion in the last 10 minutes and that helped with the goal,” Steinke said. “I was the one who put in the net, but it was everyone else’s hard work that helped it. “

The Rams spent the remaining eight minutes of the match pressuring for the equalizer, but were halted by Burdick and the clock striking 90 minutes.

The loss puts the Rams at 0-2-1 for the season, but Hempen is still confident with the group he has going forward.

“We’ll be absolutely fine, and again, I will not refrain from tooting the horn of this particular group of Rams,” Hempen said. “They’re going to get it done. They just have to believe that.”

The Rams have a week off before they are back in action against New Mexico State on Friday, Sept. 1 for a 1 p.m. game at the CSU Soccer Field.

Collegian sports reporter Christian Hedrick can be reached by email at sports@collegian.com or on Twitter @ColinBarnard_.